Hot, humid and windy conditions put quite a few non-irrigated early planted corn and soybeans on light under moisture stress this last week. Thunderstorms in the afternoon of June 14 helped provide relief for some, but left other areas dry. Moisture levels below the root zone continue to provide moisture to crops as the roots grow deeper as the crop develops. Evapotranspiration rates have ranged from 0.2-0.22 inch per day over the last several days. Growing degree day accumulations have been in the 24 – 25 growing degree-days per day (normal 17-18), which has spurred rapid growth in corn and soybeans.

Expect a significant change in the temperature regime in the 6-10 day and 8-14 day period, with much below normal temperatures expected to be centered over Michigan. The temperatures are expected to moderate to closer to normal in the 8-14 day period in southwest Michigan. Precipitation is anticipated to remain near normal for southwest Michigan with potential for slightly above normal for the 8-14 day outlook. Michigan State University climatologist Jeff Andresen is a bit skeptical of this increase, however.

Corn has been planted in three main time periods across southwest Michigan: Late April, Mother’s Day weekend and late May-early June. The earliest planted corn is V7-V8, middle planted is V6, latest planted is V1-V3. Field operations include late side-dressing to delayed pre-emergence herbicide applications. Dry conditions may have hurt the effectiveness of pre-emergence applications in the later planting window due to limited water to activate herbicides. Watch for grass weeds that have grown beyond 0.75 to 1 inch in height, as these may not be controlled by the pre-grass herbicides.

The MSU Irrigation Scheduler suggests that corn in early emerged corn St. Joseph County could have used supplemental 1.5 inches of irrigation so far to maintain soil moisture at the 80 percent water holding capacity level on a Kalamazoo loam near the Mendon Enviro-weather station.

There have had a few fields that have been treated for armyworm and black cutworms, but the damage has been pretty sporadic. Most fields will have at least some cutworm damage if there was any green cover during late April and early May, but most are limited to 2-3 percent.  I have been called out to look at two fields that had a combination seedling rots and cutworm damage. Cutworm sizes were between 1-1.25 inches in length. White grubs can also be found in elevated numbers in some fields this spring. It is a mixture of species, some Asiatic, some Japanese beetles.

Sandhill crane damage is significant in fields that are adjacent to habitat. Look for plant carcasses on the soil surface and damage usually occurs down the row. The cranes like to feed on the seeds still attached to the roots of the plants. Patching can be an option on stands that are severely compromised but we are rapidly running out of growing season. Corn that is more than 12-14 inches tall is usually not susceptible to crane feeding any longer.

Corn rootworms are likely to have hatched and will begin feeding. We should begin watching fields for signs of feeding soon. From above ground, rootworm feeding shows up as lodged or severely water stressed plants on droughty soils. Impacted plants will tend to lodge in thunderstorm winds, even in the absence of other symptoms. Roots can be dug washed with a power washer and evaluated for damage as the plants approach move towards tasseling. 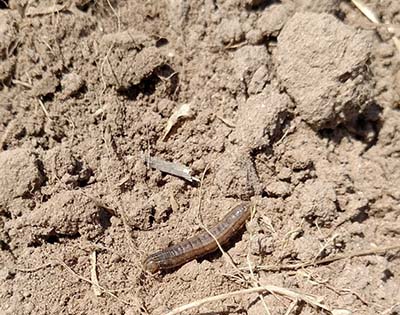 Healthy looking Cutworm larvae in a recently planted seed corn field on June 1 in Cass County. Winter annual weeds may have helped this larvae to be able to "bridge" until the corn emerges. Photo by Bruce MacKellar, MSU.

Western bean cutworm monitoring for moth flight will begin next week, while we do not anticipate peak moth flight for almost another three weeks. Trapping helps to better understand when to scout for egg masses, and to time insecticide applications if it becomes necessary.

Early on slug feeding was significant in some lower lying fields and some bean leaf beetle feeding. The next pests to scout for will be soybean spider mites and soybean aphids, followed by Japanese beetle foliar feeding. If dry conditions continue to persist, two spotted spider mites may gain a foothold in areas along fields that are dry (sandy knolls, areas along gravel roads or farm lanes).

The areas wheat crop that is not being grown under irrigation is struggling with moisture deficits that certainly have the potential to ding yields. Wheat grown under irrigation continues to look good. There have been some fields that have armyworms at treatment threshold levels and some have been treated. Incidence is widely sporadic. Some stripe rust can be found in wheat fields. Wheat is in the latter grain fill stages, about 5-10 days ahead of normal development.