The 2017 growing season has been a bit of a roller coaster for temperature and precipitation in southwest Michigan.

Despite the extremely warm temperatures during mid-June, the overall growing season heat accumulation is falling a little bit behind what we have seen over the last five years. Despite the somewhat cooler than normal conditions, we are seeing the wheat crop racing towards maturity, especially where the crops have been irrigated to avoid moisture deficits.

Wheat has begun to turn in earnest over the past week, with many fields appearing to reach harvest five to 10 days ahead of normal. Precipitation continues to be extremely variable across southwest and south central Michigan.

Almost all of the significant rainfall has occurred in thunderstorm events associated with the warm frontal boundaries. The cold fronts have produced less than anticipated precipitation for the most part. 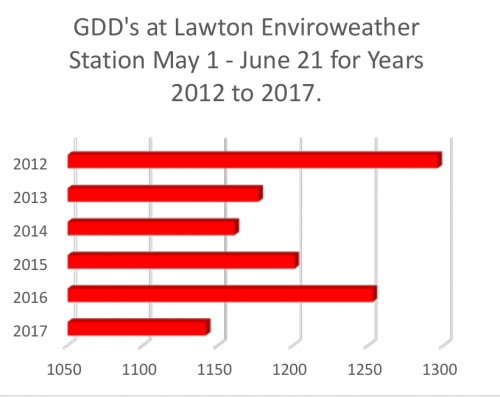 The 6-10 day and 8-14 day outlooks from the National Oceanic and Atmospheric Administration suggest cooler than normal conditions associated with above normal precipitation levels. However, as is evident by the precipitation chart below, this does not ensure everyone will receive heavy rainfall.

Evapotranspiration rates are creeping up for crops that were planted on time. Irrigation systems have been running in many fields in southwest Michigan to provide adequate soil moisture levels. 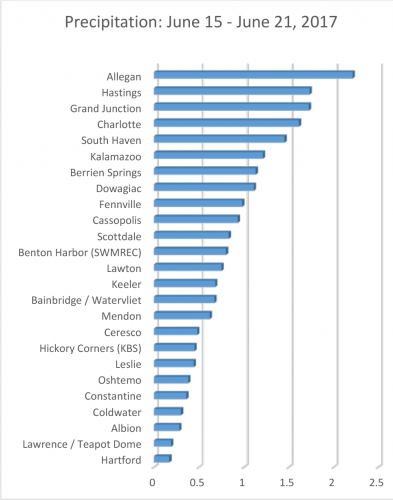 The Michigan State University Irrigation Scheduler for an early planted corn field near Mendon, Michigan, on Kalamazoo loam estimated that an additional 1 inch of irrigation would be needed to bring the soil moisture level up to 80 percent of the readily available soil moisture (target) level. The evapotranspiration values have been around 0.21 inches per day over the last week.

Overall, the crop looks good as the sidedress nitrogen is turning fields deep green. For anyone interested in placing western bean cutworm traps out in fields, we are beginning to monitor moth flight this week.

Sandhill crane damage continues to be a problem in southwest Michigan corn fields. While most fields are rapidly growing beyond the size where cranes will pull plants up to eat the seed attached to the plants, we are asking growers to estimate crop damage losses caused by the birds to help wildlife officials make decisions on ways to limit this damage in future years. 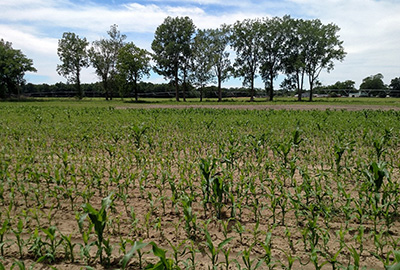 Sandhill Crane damage to a corn field near Sturgis, Michigan. Note the few remaining (large) plants from the original stand. This field was replanted on Memorial Day weekend. Up to 50 cranes were observed in the field when the damage occurred. Photo by Bruce MacKellar, MSU Extension.

Early planted soybeans are growing rapidly. Most of the post-emergence spray programs have been applied and weed control is pretty good so far. The later planted fields are variable, with some stand issues in areas.

MSU Extension field crop entomologist Christina DiFonzo walked fields in southwest Michigan on Wednesday, June 21, and we did not see much signs of soybean aphids. We have seen very few Japanese beetles emerging.

Use ammonium sulfate in the mix with roundup applications to help reduce challenges with calcium tying up glyphosate. Be on the lookout for weed escapes in corn and soybean fields.

Wheat is beginning to turn. Overall, the crop is looking pretty good, with limited issues from leaf diseases. We looked at some high levels of armyworm damage in central Cass County. The good news is there was very little head clipping on these fields.

Some corn adjacent to these fields did suffer limited areas of defoliation. Armyworms have begun to pupate, and lots of pupal cases can be found in the impacted wheat fields. This should signal the end of armyworm damage in our area this early summer. 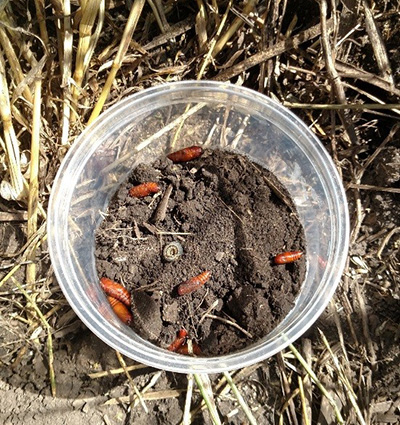