Fruit is off to a slow start as temperatures warm slowly in the southwest region.

April has been seasonal in that the highs have been in the 50s and 60s and lows near freezing or below. Snow has disappeared and warmer temperatures over the weekend, April 12-13, caused a quick green-up. After the warm weekend, many perennial plants are just beginning bud break. Soils are wet and cold. Comparing the growing degree days (GDD) for the last five years at the Southwest Michigan Research and Extension Center (SWMREC) shows that we are well-behind normal, but comparable to 2009 and 2013.

Growing degree days for March 30 at SWMREC near Benton Harbor, Mich., for the last 15 years.

This week will be cool with temperatures below freezing at night which will hold back growth. Rainy weather is forecast for later in the week. The long-term outlook is for continued cooler than normal weather, so plant development will continue to be slow. Growers are applying dormant sprays for diseases and pre-emergent herbicides for weed control.

Growth is just beginning. At this stage of development it would require lows in the teens to significantly damage most tree fruit buds. Some fruit buds damaged during the winter are starting to drop from trees. At this early growth stage, we should be able to withstand temperatures down to 20 degrees Fahrenheit with little if any damage (see “Freeze damage depends on tree fruit stage of development”).

More reports of damage to orchards by deer (buds and shoots up in the tree), rabbits (bark and buds at and above the snow line) and voles (girdling the bark near the ground under the snow) are coming in as growers are getting out into their orchards. Where the trunk has been girdled by mice or rabbits, growers can use bridge grafting. Scion wood needs to be collected now even though the grafting will be done in May. 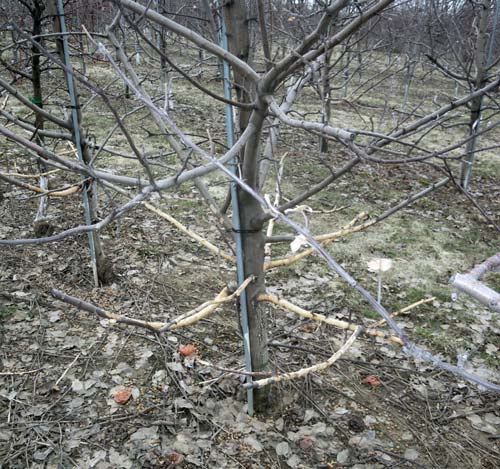 The trunk of this tree was not injured by rabbits, but all the lower limbs are girdled as rabbits ate all the bark off. Photo credit: Mark Longstroth, MSU Extension

It is still too early to easily estimate the total impact of winter low temperatures on the region, which will be much easier to assess after we move past bud burst and many trees can be quickly surveyed rather than collecting and cutting individual buds. Growers have been forcing buds to determine damage.

Apricots are showing bud swelling. Apricots are considered extremely cold hardy in the winter, but only a little damage to fruit buds has been reported.

Peach fruit buds are starting to swell, which opens them to infection by the peach leaf curl pathogen. Infection by this fungus requires at least 10 hours in the temperature range of 46 to 53 F and rainfall greater than 0.2 inch. Very few peach and nectarine varieties grown in Michigan have resistance to this disease. Fungicide treatment to control peach leaf curl, if not already done, should be applied as soon as practical.

Bud swell in cherries has begun. Sweet cherries show some winter damage to the fruit buds with less damage in good cherry sites. Damage is often only one flower in a flower bud, which usually contains three to four flowers. Tart cherries generally show some damage only in the coldest sites.

Bud swell in plums has begun. Winter injury is expected in Japanese plums, which are less winter hardy than European plums, which should show less injury.

Apples are generally at silver tip. Early apple varieties such as Ida Red, McIntosh and Zestar are beginning to show green tip. This signals the start of apple scab management season. A few apple scab spores were trapped from Sunday’s rain (April 13). This would be a good opportunity to use copper for early season scab control. Apple foliage needs to be protected from scab until about a month after bloom when the overwintering spores are exhausted. Oil application for scales and red mites is an option now. Most growers will wait until leaves have begun to emerge and mite and aphid eggs are more vulnerable because they are closer to hatching.

Rabbit damage varies from girdling of the trunk to girdling of the scaffold branches. In many cases, deer or rabbits have removed all the buds and new growth as high as they can reach. Michigan State University Extension suggests the girdled limbs be removed so that new shoots can be grown to replace them. 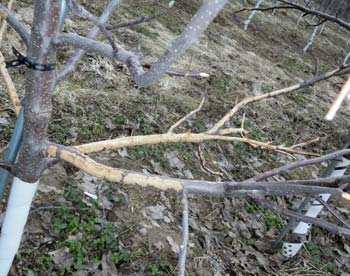 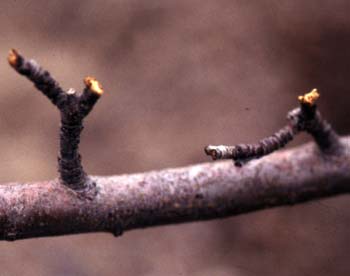 (Left) Rabbits striped the bark and ate the shoots off this apple limb. The sharp points at the tips are indicative of rabbits with sharp, chisel-like teeth. Deer would leave ragged, crushed tips where they tear the shoots off. (Right) Deer feeding on apple limb spurs. Ragged ends are typical of deer feeding. Photo credits: Mark Longstroth (left) and Bill Shane (right), MSU Extension

Pears show bud swelling and are susceptible to pear scab infection. Pear psylla should be out soon.

Grapes show no movement. Grape growing degree days are base 50 F and heat accumulation starts April 1. Damage to grapes is widespread, but varies a lot between different varieties and fruit sites. Not only does damage vary a lot between sites, but grapes often have secondary shoots which vary in their fruitfulness. Accurate crop assessments need to wait until we see how fruitful the secondaries are. Some varieties such as Concord show little damage

Blueberries show some movement with terminal flower buds swelling. Varying amounts of injury from winter cold have been reported and damage will become more apparent as the flower buds continue to swell. Deer damage has been reported where deer have eaten last year’s growth, removing the fruiting zone. As green tissue emerges from the leaf buds, growers should apply fungicides to protect against mummy berry.

Strawberries are greening up and new leaves are beginning to emerge. Over-wintering mulches should be removed and raked between the rows. Now is a good time to apply preemergent herbicides for early season weed control.

Brambles show no movement. Dormant pruning cutting back last year’s primocanes should be completed. Fall bearing raspberries should be cut or mowed to the ground. Lime sulfur treatments for anthracnose can be applied.

Our next Monday fruit IPM meeting is April 21 at Fruit Acres Farms, 3452 Friday Rd., Coloma, MI at 5 p.m. Michigan pesticide applicator recertification credits will be given for these meetings.

Help reduce pesticide risk to bees and other pollinators