Soils are dry. Summer fruit harvest is in full swing with blueberries, peaches and plums. Early apples and pears will start soon.

Last week was pleasant, cool and dry. High temperatures rose through the 70s early in the week to the mid-80s over the weekend. Lows were generally in the 40s and 50s. Little rain has fallen across the region in the last three weeks and most of this was scattered from isolated thunderstorms. Rainfall totals for this period varied from 0.5 inches to 1.5 inches (evapotranspiration was about 3.5 inches) and many soils are very dry. Field crops such as corn and soybeans are wilting in the fields on sandy soils. Stress is easy to see in some trees with yellowing and wilting leaves.

Storms moved across the region Monday and early Tuesday, Aug. 4-5, and brought some rain to a few sites. Rainfall totals from these storms varied from 0.2 to 0.7 inches. Evapotranspiration (ET) has about 0.17 inches of water a day or just over an inch of water a week. Our sandy soils only hold about an inch of water per foot of soil.

Dry conditions in central Berrien County are putting stress on young trees in sandy sites. A marmorated stink bug was trapped in south Berrien County. Oriental fruit moth trap catches for the second generation are generally declining. The Trevor Nichols Research Center (TNRC) catch of San Jose scale male moths jumped to 659 this week, compared to 15 for the week before. With a July 21 biofix for the second generation, the GDD base 51 F total as of Aug. 4 for Fennville, Michigan is 213. Crawlers are expected about 500 GDD base 51 F after the biofix. Codling moth trap catch of the second generation has dropped close to zero for most sites. Japanese beetle adults are still active and potato leafhopper damage can be found in many sites. Late July and early August is the time to do tissue sampling for nutrient analysis.

Peaches are scarce in many areas due to winter injury to the fruit buds and to the trees themselves. Good peach sites close to Lake Michigan have fruit in northern Berrien and Allegan counties. Peach varieties that will start harvest at the end of this week or early next week in Berrien County include Saturn, Redhaven, PF9A-007 and Starfire. Redhaven harvest will be approximately four days later than the predicted harvest date.

Brown rot is showing up on damaged fruit and is spreading to adjacent foliage and branches. Larvae from the second generation flight of oriental fruit moth traps are starting to show up in unprotected fruit. Recent warm weather has hastened leaf drop due to bacterial spot. Low rate copper treatments were fairly successful in suppressing this disease.

Peach scab is becoming easier to find on fruit of susceptible varieties under minimal spray programs. Branch constriction canker (Phomopsis) is showing up as wilting and gumming of current season’s growth. Some of this wilting and yellowing of leaves is certainly due to winter injury as well.

In cherries, leaf loss due to cherry leaf spot is severe in some orchards. Michigan State University Extension recommends growers continue protection against cherry leaf spot to maintain good, healthy foliage into the fall. Chlorothalonil (Bravo, Chloronil) can be used post-harvest with a maximum of 15.4 pounds of active ingredient per acre per year.

Plum harvest of ‘Vibrant,’ a European plum variety, is winding down with Ozark Premier and Santa Rosa beginning. Apple maggots, oblique banded leafrollers, codling moths and brown rot can be problems in plums in August. Bacterial spot symptoms are common on the side of fruit exposed to westerly winds. Dry conditions have made plums more flavorful.

Apple fruit range from 2 to 3 inches in diameter, depending on the variety. Harvest of Earligold, Pristine and Paula Red will begin soon in some sites. We are approximately a month away from Gala harvest and growers should check the dates for applying Retain for stop drop control for the apple varieties they grow. Apples seem to be developing and maturing faster than we expected. The actual harvest dates may be before the predicted apple harvest dates issued earlier and closer to the average harvest dates in your region. Make sure you do not miss the application window (30 days or less). Red strain ‘Gala’ varieties are showing conspicuous red coloration, with an estimated harvest date of Sept. 5 for central Berrien County. ‘Zestar’ is relatively poor colored so far.

In some orchards, fire blight spread has slowed and stopped, but fire blight movement continues to be a problem following the severe weather of June 30. Young trees infected with fire blight can develop rootstock blight. For more information, see the following articles: “Field symptoms of rootstock blight in apples” and “New video resources in tree fruit pathology from MSU.”

The frequent rains have been conducive to sooty blotch and fly speck disease infections and symptoms can be found on unprotected fruit. Codling moth and oriental fruit moth larvae from the first generation have been found in apple fruit. Obliquebanded leafroller trap catches have dropped near to zero with the end of the first generation flight. Apple maggot adult trap catches continues at the TNRC near Fennville, Michigan. Sandy sites with early summer varieties tend to be most prone to apple maggot problems.

Pear harvest has begun with Clapp’s Favorite in some orchards. Codling moth larvae are showing up in fruit. Fabraea leaf and fruit spot and pear rust mite bronzing of leaves are becoming easier to find.

Blueberries are harvesting. Spotted wing Drosophila (SWD) is the pest of major concern. Many traps in the region are catching SWD adults and the population of this pest normally explodes in early August. We continue to catch low numbers of flies in our traps located in fencerows near berry fields. These numbers seem to be correlated with the abundance of wild fruit in the area. There are few blackberries around this year and numbers seem low in these areas. More information is available on the MSU Spotted Wing Drosophila website and the weekly SWD reports on the MSU Extension Fruit & Nut page.

Winter-damaged grape canes and trunks continue to show wilting and leaf death as damaged woody tissue is unable to supply enough water to leaves. The heavy crop on some hybrid and many Concord and Niagara vineyards may need to be thinned to allow proper ripening. Thinning done before veraison is more effective than thinning after veraison. After veraison, more crop needs to be removed to have the same impact of sugars in the fruit reducing the tonnage harvested. We should begin to see veraison in early varieties soon.

Many growers have reported a red blush on dark-skinned grapes and wondered if it was early veraison or a disease. Some of these Concord berries actually had a downy mildew infection to the stem near the berry which had killed the stem. For healthy berries, this blush could be caused by bright, sunny days and cool nights similar to skin color development in apples where some varieties are already coloring well.

Southwest Michigan GDD summary for grapes from April 1 to Aug. 3, 2014

Grape growers are applying sprays for grape diseases and grape berry moth. Downy mildew has been reported in many wine and juice vineyards due to the rains earlier this month, which let the disease get started. Weather conditions for the rest of the growing season with heavy dews every morning are ideal for the spread of downy mildew and growers should make every effort to get in front of this disease. See “Weather is ideal for downy mildew on grapes at this time” for background on the disease and controls recommended by MSU Extension. Additional fungicide sprays may be warranted as veraison approaches (see “Controlling Botrytis bunch rot in grapes”).

In blueberries, machine-harvest of Bluecrop and Jersey is underway. Fruit quality has been excellent. Late July and early August is the time to do tissue sampling for nutrient analysis. Cane collapse due to phomopsis continues to be a problem is some fields with new symptoms continuing to appear. Most growers are irrigating blueberry fields.

Managing harvest, irrigation and spraying for SWD requires planning to allow timely harvest and irrigation and maintain coverage against insect pests. The blueberry planting at the Southwest Michigan Research and Extension Center (SWMREC) is not regularly sprayed and has blueberry maggot and SWD larvae in it. SWD trap catch numbers are generally low in fields. The populations of this pest in the woods and fencerows vary depending on the abundance of wild berries. Populations can build up in wild berries and as the wild berries decline large numbers of flies will be looking for ripening fruit.

Border sprays may be an effective way to slow the spread of SWD into commercial berry fields. Growers only need to protect fruit that has begun to ripen. Many growers have maintained tight coverage against this pest since the first catch reports last month. See “SWD Management Recommendations for Michigan Blueberry Growers” for more information. MSU Extension recommends shortening harvest intervals to reduce the amount of time ripe fruit is available to SWD. Harvested fruit should be chilled quickly after harvest to reduce post-harvest problems.

Strawberry new growth in June-bearing fields generally looks good. Growers need to protect against potato leafhoppers, which stunts plant growth. Growers should check areas with poor growth by digging up some plants to examine the roots. If all the roots are black with little new growth, this is an indication to black rot. Cut the crown open to see if the center of the root is white or red. A red or cinnamon-colored crown indicates red steele caused by phytophthora. A discoloration between healthy roots and a healthy crown indicates verticillium wilt. Day-neutral plantings are starting to produce more flowers and fruit. Growers need to protect this fruit from SWD. 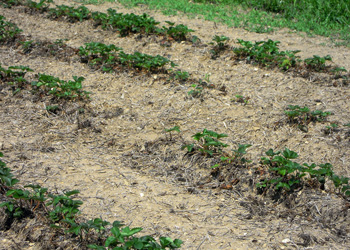 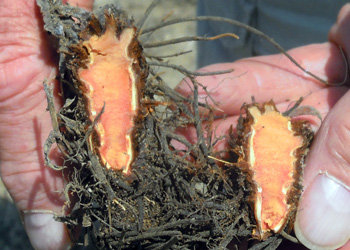 Left, Poor growth in strawberries after renovation is often a symptom of a root disease. Right, Black roots and the lack of new white roots are a symptom of black root rot. The cross section of the crown indicates that there may also be Phytophthora in the planting. A sample to MSU Diagnostic Services would confirm the presence of phytophthora.

In brambles, harvest of summer red raspberries is ending. There is very little crop of blackberries due to the loss of fruiting canes to winter cold. Fall-bearing blackberries are blooming and the first fruit are beginning to cold. Harvest of fall-bearing raspberries will begin soon. Raspberries seem to be the favorite fruit for SWD. Growers need to apply controls as soon as there is ripening fruit in the field. Generally, control of this pest has been much better than in previous years. See “Spotted Wing Drosophila Management Recommendations for Michigan Raspberry and Blackberry Growers” for more information.