Late-season pests are flying. Peach volumes are increasing during the harvest of mid-season varieties. Blueberry harvest is winding down.

Last week was hot. High temperatures rose into the 90s and then fell into the mid-80s for the weekend. The overnight lows were in the 60s and 70s. There has been no rain in the last two weeks and soils are dry. Evapotranspiration (ET) rates have about 0.2 inches of water a day, so we are short about 2.8 inches of water for the last two weeks. Field crops are wilting during the day. This week, ET rates will be 0.2 or more per day.

The upcoming week will be hot and dry with temperature rising into the 90s. There is a chance of rain Thursday night through Saturday, Aug. 11-13, with a cooler (normal) weekend.

Western flower thrips are causing fruit blemishes in some orchards. The fungal disease peach scab can build up on fruit with a minimum spray program. Brown rot control programs should rotate among the different classes of fungicides to stave off resistance problems. Save the most effective fungicides for when ripening fruit are coloring and most susceptible to infection. Bird pecks in the fruit serve as easy infection points for brown rot. 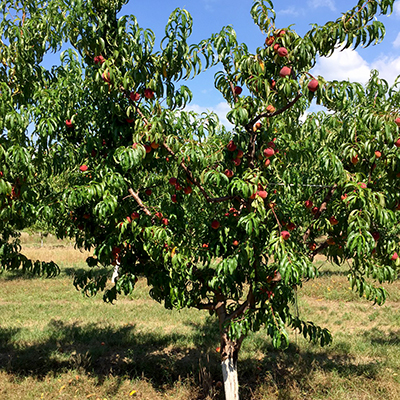 Cherry leaves need to be protected from cherry leaf spot all season. Cherry leaf spot is appearing in the treetops in tart cherry orchards. Growers can do modest pruning in cherries after harvest through August.

Plum harvest of Vibrant, Vanette, Santa Rosa and Ozark Premier is underway in central Berrien County orchards. There is some pre-harvest drop in some varieties, especially in orchards with a heavy crop. Increase brown rot spray programs as fruit start to color and ripen. Fruit left on the tree until soft are more susceptible to SWD infestation.

Apple harvest date estimates are available from MSU Enviro-weather for weather stations across Michigan. With this heat, many varieties will pick earlier than normal. In central Berrien County, estimated harvest dates are Aug. 30 for McIntosh. Retain applications are targeted for 30 days before expected harvest. In hot summers such as 2016, Gala tend to ripen before McIntosh. Earligold harvest is underway in some area orchards. Zestar are starting to develop red blush and sweetness. 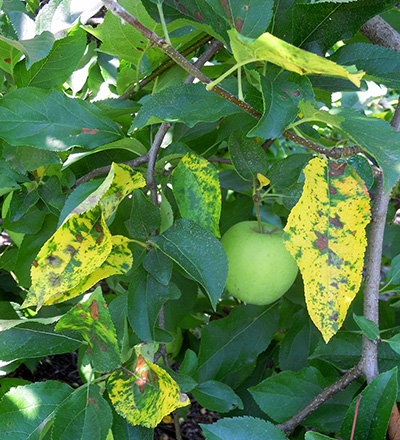 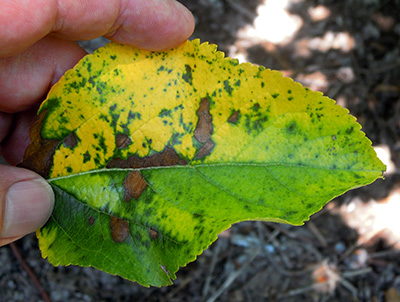 Fruit entry stings from codling moth or oriental fruit moth larvae can be found. Peak egg laying of second generation codling moth is underway now. Obliquebanded leafroller trap catch numbers are up for the second week, with the start of the summer generation. Apple maggot numbers are down. Apple maggot flies emerge after summer rains, and dry conditions can keep number down. See “Managing apple maggots with insecticides” for more information. Sooty blotch and flyspeck disease symptoms should be appearing. A general rule of thumb is reapply fungicides for these diseases after an additional 220 hours of leaf wetness, or 2 inches of rain has occurred following application.

Pear fruit range from 2 to 2.25 inches in diameter. Fabraea leaf spot is common on some varieties. Fungicides applied for pear scab in June and July generally control this disease. Some orchards have sticky leaves due to pear psylla honeydew.

Spotted wing Drosophila (SWD) numbers are high in southwest Michigan. See “Michigan spotted wing Drosophila report for Aug. 5, 2016” for more information. We are catching high numbers of SWD in many traps. We normally see a surge in SWD numbers in August, as SWD come off ripening wild fruit such as black raspberries and blackberries. Growers with ripe fruit should be protecting against this pest now. Japanese beetles are generally scarce.

Grape veraison has started in early ripening varieties, and some color is showing in Concord grapes. Pressure from grape leafhoppers, potato leafhoppers and Japanese beetles remains low in most vineyards. Third generation flight of grape berry moth continues; a second spray may be warranted where contact insecticides were used. There will very likely be a fourth generation of berry moth this year. Where pressure is heavy from the third generation, a spray at 2,430 growing degree-days from wild grape bloom may be needed. For this application, short pre-harvest interval materials should be used.

Blueberry harvest continues. Growers are finishing up in Bluecrop, picking Jersey for the second or third time and beginning to pick Elliott. Fruit is ripening quickly in this heat and growers are complaining of soft fruit. Shorten the harvest interval so that ripe fruit’s exposure to heat and SWD is kept at a minimum. We see a big surge in SWD numbers in August. See “Michigan spotted wing Drosophila report for Aug. 5, 2016” for more information. For current recommendations, see “SWD Management Recommendations for Michigan Blueberry.” Growers should rotate insecticides classes to avoid resistance due to overuse of one insecticide mode of action.

Blueberry maggot is another harvest pest. We had high numbers earlier in the harvest season when the soils were wetter. Anthracnose is the most common fruit rot found in harvested fruit. Systemic fungicides applied before irrigations can effectively prevent fruit rot. Fungicides applied after an infection are not as effective in controlling this disease in ripe and ripening fruit. With the hot, dry conditions, growers should irrigate to maintain good soil moisture and fruit quality. A mature blueberry bush can use over 4 gallons of water a day under hot, dry conditions.

Elliott is the last major blueberry variety to harvest. Looking at this bush with green fruit, it is easy to see it is also one of the most productive blueberries. Photo: Mark Longstroth, MSU Extension. 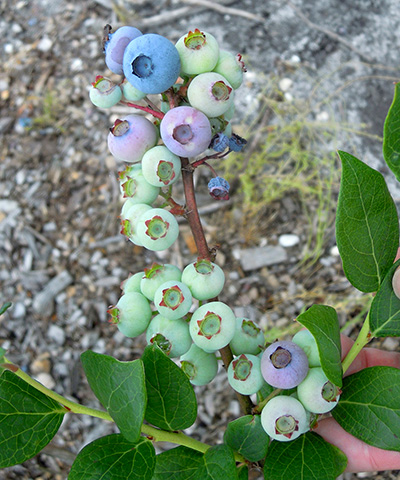 The lead berries in each cluster are ripening and growers are hand-harvesting for the fresh market. Photo: Mark Longstroth, MSU Extension.

Strawberry fields are generally looking good after renovation. Growers should protect leaves from potato leafhoppers, leaf diseases and leaf-feeding insect pests. Irrigation under these hot, dry conditions will insure a good crop next year. Day-neutral strawberry growers should protect their fruit against SWD.

Joins us at the Peach and Plum Variety Showcase on Aug. 23, 2016, at the Southwest Michigan Research and Extension Center, 1791 Hillandale Rd, Benton Harbor, MI 49022, at 4 p.m. Growers can see, discuss and sample stone fruit from the MSU variety trials, commercial growers, nurseries and university breeding programs across Michigan and elsewhere. Fruit include yellow and white fleshed peaches, nectarines, donut, aprium and plumcot types. There is no charge for this meeting. Supper will be provided courtesy of International Plant Management and Summit Sales of Lawrence, Michigan.