Last week was hot and humid with highs near 90 and lows near 70. Evapotranspiration rates have been high, almost 3 inches in the last two weeks. Soils were drying out and some plants were showing leaf burn from the heat. Storms crossed the region on Friday (July 19) and Sunday (July 21). Coverage from these storms was spotty and rainfall totals from the last week ranged from 0.6 to 3 inches, so some areas have adequate soil moisture and other sites, especially those with sandy soils, are short.

This week will be much cooler with only a slight chance of rain. We are about half a week behind the five-year average in growing degree days (GDD). Check your local weather station and conditions at Enviro-weather.

Recent heat stress has caused weak trees to develop yellow leaves. Japanese beetle numbers have increased over the past week. Spotted wing Drosophila (SWD) adult male and female flies are increasing as small and tree fruits ripen. The highest trap catches of SWD from locations we monitor were 17 (13 males and four females) and 18 (10 males and 8 females). This is more than double the number of SWD trapped at the same locations the previous week.

Peach harvest of Glenglo, Early Redhaven, Risingstar, Summer Serenade, PF-7A and Harrow Diamond is underway in Berrien County. Some growers are disappointed with fruit size despite the adequate rainfall this spring. Possible causes are poor reserves coming into 2013 due to the drought in 2012. This is manifested by smaller than normal leaves associated with small fruit for entire trees. Another possible cause was later fruit thinning where there was a heavy initial crop.

Bacterial spot, brown rot and some Rhizopus rot are the major issues now. Leaf drop due to bacterial spot infections is continuing. Brown rot control programs and possibly insect control of SWD will need to be ramped up as we approach harvest. Oriental fruit moth trap catches have been steady at a relatively low level.

Sweet cherry harvest is done for most farms. Brown rot and fruit cracking was the big problem this year with some varieties having over 25 percent cracked fruit. Post-harvest sprays for cherry leaf spot, cherry fruit flies and spotted wing Drosophila will help to hold down these problems. Post-harvest pruning from now to early September will reduce bacterial canker problems, but should be done primarily on mature trees.

Tart cherry mechanical harvest is done, with some hand-harvesting for direct sales continuing. Fruit quality was generally good to excellent, with some heat-related soft fruit problems at the end. Cherry leaf spot symptoms have increased noticeably recently. Growers should protect against fruit flies, including Spotted wing drosophila, and the diseases cherry leaf spot and brown rot. Post-harvest pruning from now to early September will reduce bacterial canker problems, but should be done primarily on mature trees as the practice is somewhat devigorating to the trees. 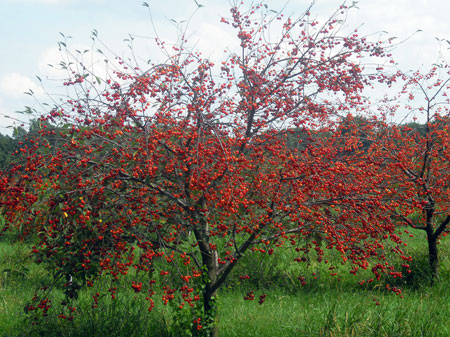 In plums, harvest of Japanese plum varieties Early Golden, Methley and Early Magic is underway with the variety Shiro to start soon. Japanese plum leaves are riddled with leaf spots and shot holes caused by bacterial spot, but control measures for this disease now are too late. Fungicide sprays for brown rot should increase as fruit begin to color. Fruit with insect and bacterial spot damage are more prone to brown rot infections. Information on plums including varieties and where to buy Michigan plums can be found at the Michigan Plum Advisory Board website.

Apple fruit at the Southwest Michigan Research and Extension Center (SWMREC) are 2 inches in diameter for ‘Golden Delicious’ and ‘Gala’, 2.5 inches for Red Delicious and 3 inches for ‘Zestar.’ The recent hot weather has prompted some local growers to apply sunburn prevention compounds (Surround) to Honeycrisp and Zestar apples.

No reports of sooty blotch and fly speck symptoms on apples and pears. Trap catches for oriental fruit moth and codling moth male adults are generally low with a few exceptions. Start of the second generation moth flight was expected at 1,125 GDD50, which is July 7 for the Watervliet/Bainbridge Enviro-weather station, and the beginning of the second generation egg hatch at 1,425 GDD50, approximately Thursday, July 18, for the same location.

Fire blight spread by wind began showing up about 10 days ago (as of July 23) in apple blocks downwind from older blocks showing symptoms earlier. Low numbers of apple maggot flies have been reported. Apple maggots are a close cousin of blueberry maggots, which have been caught in blueberry fields for the past two weeks.

Michigan State University Extension’s predicted apple harvest dates for 2013 based on the SWMREC location are:

These are four to six days behind the long-term normal date, and a month behind 2012.

In grapes, we have passed the 1,200 GDD threshold for determining 50 percent of final Concord berry weight. Some vineyards have heavy crop loads and growers should be making adjustments to their crop. Trap catches for grape berry moth continue to be fairly low. Second generation grape berry moth egglaying is well underway, and growers should be checking bunches for feeding by larvae, in addition to checking traps for flight of adult male moths. The percent of infested grape clusters in vineyards we monitor has been running about 4 percent.

Japanese beetle feeding is increasing. Watch for damage to young vines and wine grapes. We have been catching SWD in traps along vineyard borders, but there is no risk to grapes at this time because the berries are too hard for the flies to penetrate. Black rot-infected berries are quite noticeable now. Certain vinifera cultivars remain susceptible to black rot through veraison. Downy mildew and powdery mildew are the diseases of most concern now. There is considerable downy mildew in the unsprayed sentinel plots we monitor. Weather conditions this coming week will be more favorable for this disease.

Growers with ripening fruit need to scout for blueberry maggots and spotted winged Drosophila (SWD). Blueberry maggot is being trapped across the region and SWD have been trapped across southwest Michigan. Numbers of both pests can be expected to rise in the coming weeks. Not all SWD traps are catching flies, but growers who are not monitoring for this pest should be applying controls. Growers should also be applying controls to suppress anthracnose and alternaria fruit rots.

In strawberries, renovated fields are putting out new leaves and irrigation is needed to regenerate the plants. Watch for potato leafhoppers as new leaves emerge and treat if needed to prevent this insect from stunting the new growth. Everbearing strawberries have begun to re-bloom and should be producing more berries in a few weeks.

In brambles, harvest of summer red raspberries is winding down. Growers should be monitoring their raspberry and blackberry plantings now for SWD. Our highest single trap catch last week in brambles was four females and 13 males from a trap in south Berrien County. Frequent picking of ripe fruit and removal of overripe fruit is important to keep SWD populations in check. One of the signs of infestation in raspberry is a red stain present on the receptacle when the raspberry is picked. 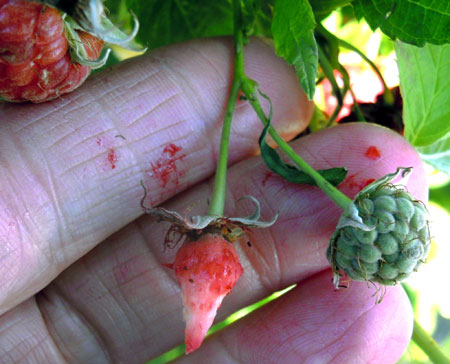 Another pest to watch for now is two-spotted spider mites. Two-spotted spider mite activity generally picks up when plants are stressed by heat and drought. Insecticides to control SWD in brambles and other insect problems should not be applied while bees are actively foraging. We have also observed sunscald on raspberries and blackberries (white drupelets) and damage to foliage on floricane fruiting raspberries that were not grown under shade. There have been quite a few double berries on ‘Encore’ summer raspberries grown in the high tunnels at SWMREC. We have not noticed this problem on ‘Nova’ grown under the same conditions. 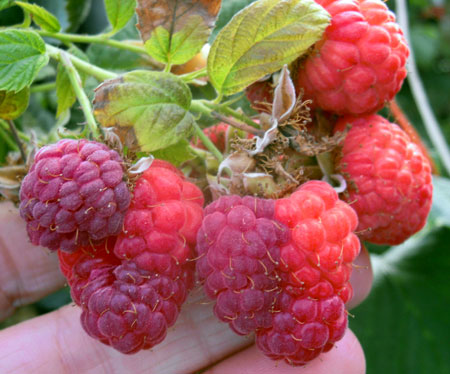 The annual Viticulture Field Day will be held at SWMREC July 31. For more information, contact Diane Dings at dingsd@anr.msu.edu.

The next in-season grape IPM meeting will be at Lemon Creek Winery on Aug. 27 from 6 to 8 p.m. Contact the Berrien County MSU Extension office at 269-944-4126 to register or for more information about the program. Registration is $15 and includes supper.

A Peach and Plum Variety Showcase will be held at SWMREC Aug. 27 from 4 to 7 p.m.