Last week was pleasant. High temperatures were generally in the 70s and lows in the 50s. Storms moved across the region on Wednesday, July 23, and Sunday, July 27, and brought a little rain to many sites. Hail in Sunday’s storms was reported in many areas, but the hail was localized and most areas received no hail. Rainfall totals varied from 0.75 inches to less than 0.1 inches and many soils are dry. Evapotranspiration (ET) has about 0.17 inches of water a day or 1.2 inches of water a week. All the rain in early July has fooled many growers into thinking there is plenty of water, but our sandy soils only hold about an inch of water per foot of soil. Shallow-rooted crops should be irrigated.

The coming week will start cool with highs in the 70s and warming into the 80s by mid-week. Last week we picked up about 184 growing degree days (GDD) base 42, about 26 per day, and 128 GDD base 50, about 18 a day. We continue to lag about one week behind normal in GDDs.

Trap catches for oriental fruit moth were generally high throughout July. The Trevor Nichols Research Center (TNRC) reports this is the second week of male flight of San Jose scale. This should be the biofix for second generation. Crawlers are expected about 500 GDD base 5 1F after this biofix. Codling moth trap catch of second generation continues where the first generation was not controlled. Japanese beetle adults are still active and potato leafhopper damage can be found in many sites. Late July and early August is the time to do tissue sampling for nutrient analysis.

Apricot harvest is winding down in the area.

Peach varieties ripening this week in central Berrien County include Glenglo, Summer Serenade and Garnet Beauty. Brown rot is showing up on damaged fruit and is spreading to adjacent foliage and branches. Stink bugs can be found feeding on fruit, causing small holes with gummy droplets. Oriental fruit moth trap catches continue to be high in some locations. Leaf drop due to bacterial spot continues on susceptible varieties, especially on west sides of trees exposed to wind. Spread from susceptible varieties to adjacent trees of more resistant types can be seen. Constriction canker (Phomopsis) is showing up as wilting and gumming of current season’s growth. 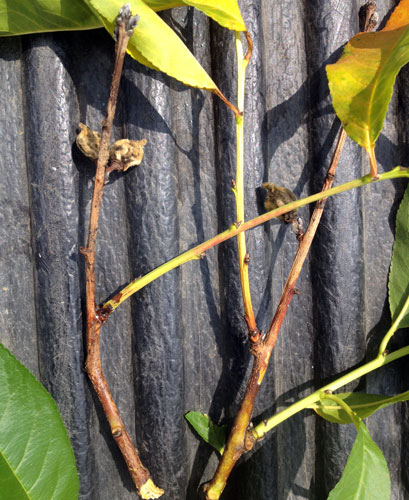 Sweet cherry trees can be trimmed modestly after harvest into early August with less risk of bacterial canker than the traditional delayed dormant pruning time in the early spring. Pruning in the post-harvest window is less invigorating than spring pruning.

Tart cherry growers should continue to apply sprays to control cherry leaf spot. Chlorothalonil (Bravo, Chloronil) can be used post-harvest with a maximum of 15.4 pounds of active ingredient per acre per year. 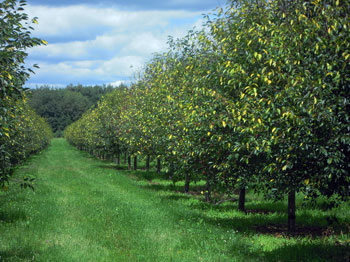 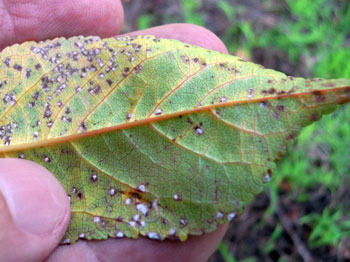 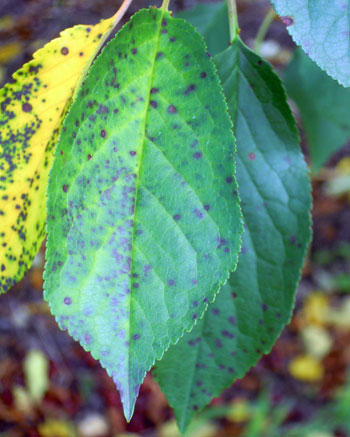 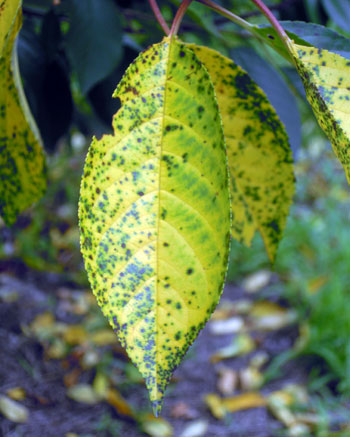 In plums, the harvest of early ripening varieties, such as the Japanese variety ‘Shiro’ and the European variety ‘Vibrant,’ is underway. Apple maggots, obliquebanded leafrollers, codling moths and brown rot can be problems in plums in July and August. Bacterial spot symptoms are common on the side of fruit exposed to westerly winds.

Apple fruit range from 2 to 3 inches in diameter, depending on the variety. Red strain ‘Gala’ varieties are showing conspicuous red coloration, well ahead of the estimated harvest date of Sept. 5 for central Berrien County. ‘Zestar’ is relatively poor-colored so far. Predicted harvest dates are now available at MSU Enviro-weather.

New fire blight symptoms have been seen in tops of trees due to the severe weather of June 30. Young trees infected with fire blight can develop rootstock blight. For more information, see the following articles: “Field symptoms of rootstock blight in apples” and “New video resources in tree fruit pathology from MSU.”

The frequent rains have been conducive to sooty blotch and fly speck disease infections and symptoms can be found on unprotected fruit. Codling moth and oriental fruit moth larvae from the first generation have been found in apple fruit. Spotted tentiform leafminer leaf mines are hard to find. Obliquebanded leafroller trap catch continues to be low with the end of the first generation flight. Apple maggot adults trap catches increased over the past week at the TNRC near Fennville, Michigan. Sandy sites with early summer varieties tend to be most prone to apple maggot problems.

Pear fruit are 1.5 inches or more in diameter. The next generation of codling moths and obliquebanded leafrollers will target developing fruit. Pear rust mite bronzing of leaves is becoming easier to find.

Raspberries and blueberries are harvesting. Spotted wing Drosophila (SWD) is the pest of major concern. Many traps in the region are catching SWD adults and the population of this pest normally explodes in late July or early August. More information is available on the MSU Spotted wing Drosophila website and the weekly SWD reports on the MSU Extension Fruit & Nut page.

Grape clusters are tight for tight-clustered varieties. Winter-damaged canes and trunks continue to show wilting and leaf death as damaged woody tissue is unable to supply enough water to leaves. While some vineyards suffered significant injury from the winter, other vineyards have a good crop and several French hybrid varieties have needed to be thinned and many Concord and Niagara vineyards have a full crop. We should begin to see veraison in early varieties soon.

Southwest Michigan GDD summary for grapes from April 1 to July 27, 2014

Grape growers are applying sprays for grape diseases and grape berry moth. Downy mildew has been reported in many wine and table grape vineyards due to the rains earlier this month. See “Weather is ideal for downy mildew on grapes at this time” for background on the disease and controls recommended by MSU Extension. Additional fungicide sprays may be warranted as veraison approaches (see “Controlling Botrytis bunch rot in grapes”).

Egglaying for the second generation of grape berry moth began about July 7, three weeks ago. A wide variety of materials are available to control grape berry moth. See the Michigan Grape Management Guide (E154) for a list of recommendations.

Blueberry harvest of ‘Jersey’ has begun. Fruit size for the first picking in most fields has been large due to the wet spring. Most of the second flush of growth has stopped as the soils are generally dry and growers should be irrigating. Late July and early August is the time to do tissue sampling for nutrient analysis.

Blueberry stem gall wasp has been reported in more fields this year, especially as harvest crews are examining bushes closly. This native blueberry pest causes a thickening or gall of the stem. Eggs were laid during and after bloom and there is only one generation per year. The most effective control is to prune out the galls in the dormant season and remove the pest from the field. 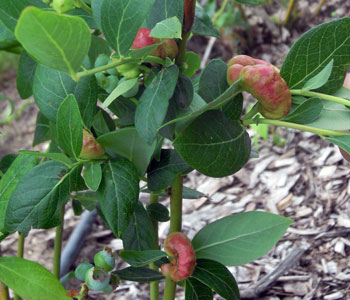 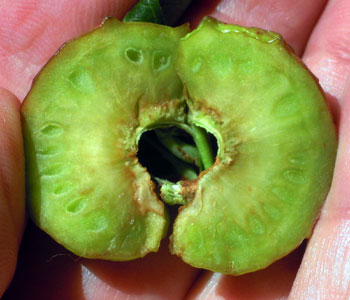 Left, A young blueberry plant with several stem galls. The galls are often localized into few plants in clusters through the fields. Right, cross section of a stem gall showing the cavities where the wasp larvae will develop. Photo credit: Mark Longstroth, MSU Extension

Spotted wing Drosophila numbers have been rising as many wild summer berries are ripening. Trap catch numbers are high in field edges where wild berries are ripening. As the wild berries decline, large numbers of flies will be looking for new ripening fruit. Border sprays may be an effective way to slow the spread of SWD into commercial berry fields. Growers only need to protect fruit that have begun to ripen. Spotted wing Drosophila is not a pest of green fruit. See “SWD Management Recommendations for Michigan Blueberry Growers” for more information.

In brambles, harvest of black raspberries (black caps) and red raspberries is slowing down. Spotted wing Drosophila numbers are building in southwest Michigan. Raspberries seem to be the favorite fruit for SWD. Many growers have been applying controls since harvest began. See “Spotted Wing Drosophila Management Recommendations for Michigan Raspberry and Blackberry Growers” for more information.