Harvest of summer fruit including strawberries, blueberries, raspberries, apricots and sweet cherries is underway or about to start.

Last week, high temperatures rose into the upper 80s and lows near 70. No significant rain fell across the area and soils were drying out. Plants were struggling in the heat and wilting during the day. Strong storms with high winds and heavy rain crossed the region Monday night (June 24) and Tuesday morning (June 25). We continue a week behind the five-year average in growing degree days (GDD). Check your local weather station and conditions at Enviro-weather.

Many tree fruit growers will be interested in the MSU Tree Fruit Pathology site on YouTube. Michigan State University plant pathologist George Sundin and his lab have posted many useful videos on tree fruit diseases and their control.

Oriental fruit moth numbers are low. San Jose scale crawlers should emerge about 780 GDD50 after Jan. 1, and currently the Southwest Michigan Research and Extension Center (SWMREC) is at 737 as of June 17. Potato leafhoppers are becoming more common and growers should protect vulnerable plants, especially young apple and plum trees.

Apricot harvest has begun with ‘Earlyblush’. Skin pitting due to bacterial spot can be seen.

Peaches are over 1.5 inches in diameter on fruit with proper crop loads. Growers are still seeing some fruit drop. Hand-thinning is nearly done in commercial blocks. Oriental fruit moth trap catches are generally low, but should pick up approximately next week with the start of the second generation flight. Very little flagging was reported for the first generation. Bacterial spot symptoms have intensified with some leaf drop and fruit infections on susceptible varieties. 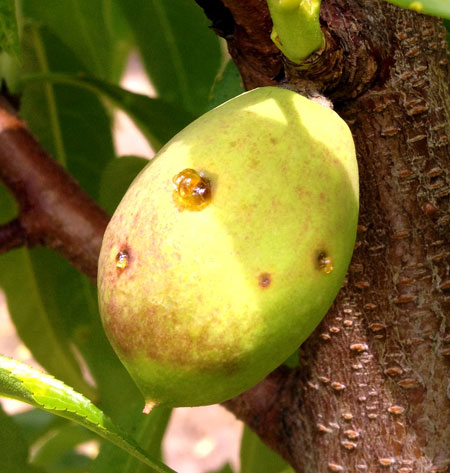 Sweet cherry harvest has begun with the varieties ‘Cavalier’, ‘Chelan’, and ‘Tieton’. The area crop ranges from fair to good, depending on the site and variety. Fruit should be protected against plum curculio and cherry leaf spot. Ripening sweet cherries are very susceptible to brown rot.

Tart cherry fruits are colored and sizing well. Ethephon sprays for uniform ripening and to ease mechanical harvest will be going on with cooler weather later this week and early next week. This is one of the best crops in southwest Michigan in recent years. Growers should protect against plum curculio and leaf spot. Cherry leaf spot symptoms are easy to find in some orchards.

Plum fruit are 0.75 inches (Stanley) to 1.25 inches (Shiro) in diameter at SWMREC. The risk for new damage to fruit by plum curculio and to limbs by the black knot pathogen should be declining. Fruit in some orchards are starting to show small, water-soaked bacterial spot symptoms. Growers should check for signs of brown rot which has been seen on green fruit in some orchards recently. The European plum variety ‘Vibrant’ is showing a mottled skin disorder of unknown causes in several locations. 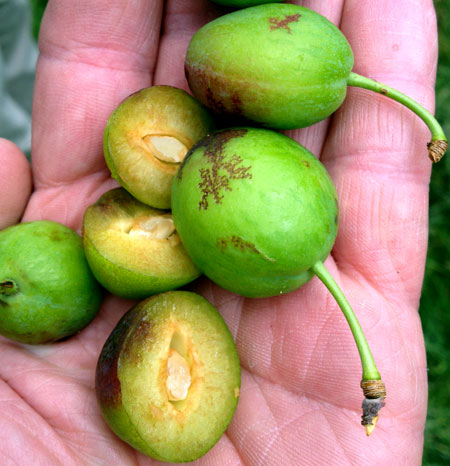 Apple fruit at SWMREC are 1.25 inches in diameter for ‘Golden Delicious’ and 1.75 inches for ‘Zestar’ and Red Delicious. Hand-thinning fruit continues in area orchards. Growers with a heavy crop, especially varieties with biannual bearing tendencies, should use NAA to enhance return bloom.

Another wave of fire blight symptoms, including ooze on limbs and fruit, is showing up in orchards on branch terminal ends. Primary apple scab season is over. In orchards with scab lesions on the leaves, growers need to maintain protective sprays to reduce further spread of the disease. Bright yellow-orange cedar apple rust symptoms are appearing on apple leaves and fruit. Both cedar and junipers are alternate hosts of this disease that causes orange growths (gall) on these plants. A close cousin, quince rust, can occur when quince and apples are grown close together.

There have been sufficient hours of leaf wetness from rain and dew since petal fall to make sooty blotch and fly speck a concern on apples and pears, according to the sooty blotch/flyspeck model by Sutton and Brown on Enviro-weather. Apples are also at risk for plum curculio and tarnished plant bugs, but the impact of these two insects declines as fruit size. Obliquebanded leafroller trap catches are lower recently, and growers should scout for the young larvae in tender leaf tissue at the ends of terminals.

Trap catch for the start of the second generation codling moth flight catch is expected to begin at 1,125 degree days base 50 degrees Fahrenheit from Jan. 1, which should occur sometime next week for the Berrien County region. Spotted tentiform leafminer mines can be found in low numbers.

Pears are approximately 1.25 inches in diameter. Growers should continue to protect against pear scab and scout for fire blight and pear psylla activity. Blackened leaves due to hypersensitive reaction to European red mite infestations are appearing on Bartlett pears.

In grapes, the Concord grape berry weight model predicts that grapes will be at half of their final weight at 1,200 GDD base 50 past April 1. On Monday, June 24, we had reached 887 GDD base 50 at the Benton Harbor Enviro-weather station, and 907 GDD base 50 for Berrien Springs.

Trap catches for grape berry moth have been low so far in the vineyards we monitor. The first generation rarely causes much damage. Check the grape berry moth model on Enviro-weather for the station closest to your vineyard The grape berry moth model predicts grape berry moth development and the start of second, third and fourth generation egglaying (810, 1,620 and 2,430 GDD base 47 F from the biofix of wild grape bloom respectively). The Enviro-weather model has been adjusted to show possible biofix dates back to May 18. We set biofix for grape berry moths in some parts of Berrien County on May 25, and May 26-28 in other parts of Berrien and Van Buren counties. For Benton Harbor, using a biofix date of May 27, 570 GDD has accumulated as of June 24. The 801 GDD mark will likely be reached sometime during the first week of July.

There is still no Japanese beetle activity in the vineyards we monitor. The bloom and post-bloom period is critical for grape disease control. Keep developing fruit protected against Phomopsis, at least through bunch closure. This wet weather is favorable for black rot infections. The black rot model on Enviro-weather shows that four infection periods have occurred since June 10. Black rot infection requires six to seven hours of leaf wetness when temperatures are in the 70 to 80 degree range.

The first symptoms of both downy mildew and powdery mildew have appeared in an untreated sentinel plot used for monitoring disease at SWMREC. Downy mildew needs three hours of leaf wetness at 70 F and two to three hours at 80 F. Powdery mildew is favored by high humidity and temperatures in the 68 to 81 F range. Consult the Michigan State University Extension 2013 Michigan Fruit Management Guide (E154) for recommended fungicides. Also see the fungicide choices for preventing disease on young fruit clusters by Michigan State University’s Annemiek Schilder.

In blueberries, early fruit are beginning to ripen and early hand-harvest will begin this week. Last week’s warmer temperatures brought out a strong flight of cranberry fruitworms and fruit growers should be sure they are protected against this unusual surge in egglaying. The cranberry fruitworm model on Enviro-weather indicates egglaying is about 95 percent complete.

Growers should be applying sprays to suppress anthracnose and alternaria fruit rots. The Anthracnose Disease Prediction Model Handout posted at the Michigan Blueberry Facts website explains how to use the anthracnose prediction model on Enviro-weather. Note that the output for this model has the earliest rains at the top so the most recent rains are at the bottom of the page. June 10 was an anthracnose infection period, but most recent rains have been too cool or too short. This should change as we warm up.

Cane collapse from phomopsis is starting to appear. Growers with ripening fruit need to begin scouting for blueberry maggots and spotted winged Drosophila.

Strawberry harvest is winding down rapidly in the heat. Sap beetles are feeding on berries. Growers should be prepared to begin renovation as soon as they decide to end harvest.

Bramble bloom continues. Fruit in the fields is beginning to color and some growers will begin harvest soon. Only fungicides should be used during bloom in brambles. Insecticides to control spotted wing Drosophila in brambles should not be applied while bees are actively foraging. Raspberry sawfly larvae are feeding on the leaves of primocanes. The first spotted wing drosophila female was found in the high tunnel raspberries at SWMREC last Friday (June 21).

A Pre-Harvest Blueberry IPM meeting is scheduled in Ottawa County on Thursday June 27, at Port Sheldon Twp. Hall, 16021 Port Sheldon Street, West Olive, MI 49460, from 6:30 to 8:30 p.m. This meeting will be good for 2 RUP credits. Thanks to Bob Carini of Carini Farms in West Olive, Mich., for sponsoring this important blueberry pre-harvest meeting.

Cherry Variety and High-Tech Research Showcase is scheduled for July 9 at the Clarksville Research Center.