Time to focus on post-bloom insects that attack fruit.

Last week was windy and dry. Temperatures were generally warm with highs in the 70s and 80s and lows in the 60s. Rain began Friday, May 29, and continued into Sunday, which was unseasonably cool. Rainfall totals for the weekend averaged about 2 inches and varied from 1.3 to 3 inches across the region. With a wetting period of 30 to 40 hours, the weekend was a major wetting event and a significant infection period for many plant diseases. Soils are wet and soil temperatures are in the 60s.Sunday was unseasonably cool with highs near 60 and lows near 40. Monday warmed up quickly. This week will be warmer with highs in the 70s and lows in the 50s. The long-range outlook for June is warmer and drier than normal.

New plum curculio egglaying scars were found last week, but were generally scarce this past week. Tarnished plant bug continues to be a threat as it builds up on broadleaf weeds and moves to the trees, especially after the cover crops are mowed. Young plum trees with black ambrosia beetles were found. Growers should inspect for this pest on young stone fruit trees with poor growth. See “Black stem borer: An opportunistic pest of young fruit trees under stress” for more information.

If you have suffered tree or plant loss due to severe winter temperatures during the last few winters, you should contact the Farm Service Agency (FSA) to document the loss. See “Relief may be available for fruit, nut and ornamental growers with winter injury" for more information.

The largest apricot fruit are over an inch in diameter. Crop potentials are fair to good, depending on variety and site.

Peaches are out of shuck split and 10 to 13 millimeters in diameter. A new predictive model for peach variety harvest dates has been added to MSU Enviro-weather. Redhaven harvest date is predicted for Aug. 3 in central Berrien County.

Foliage of winter-damaged twigs looks weak on some varieties. Peach leaf curl symptoms were generally light. No new symptoms have been reported and the disease was not found where peach leaf curl preventative treatments were used. Fungicide treatments for rusty spot should continue until pit hardening for varieties such as Loring, Bellaire and other types with showy bloom that tend to be more susceptible to this disease. Bacterial spot symptoms are generally light. Growers should discontinue using copper for this disease and switch to Mycoshield.

Oriental fruit moth adults are flying in good numbers. This first generation flight is declining as the first generation comes to an end. Shoot end flagging due to burrowing larvae should appear soon. Plum curculio and tarnished plant bug continue to be a concern. 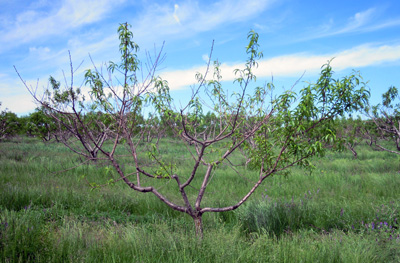 Two severe winters have severely damaged this Harrow Diamond peach tree and most of the other varieties. The grower plans on removing almost all the peach varieties in this orchard block.

Sweet cherries are 16 to 18 millimeters in diameter. Coloring fruit at this stage are starting to drop. Some fruit drop is occurring, but crop potential is still good. Plum curculio is a threat when temperatures rise above 75 degrees Fahrenheit after shuck split. Cherry leaf spot is a primary concern now. Cherry leaves are always susceptible to cherry leaf spot; apply protectant fungicides before rain events. Sweet cherries are susceptible to brown rot at all stages of development.

Tart cherries are 10 millimeters in diameter and the pits are hard. We are seeing the start of June drop, but the crop looks good. We are seeing symptoms of winter injury in young second and third leaf trees exposed to -20 F or lower this past winter. These young trees are showing limb dieback and decline. Growers need to continue to protect against cherry leaf spot. Heavy rains and a long wetting period last weekend was a heavy infection event. Growers can use the MSU Enviro-weather forecast model for cherry leaf spot to help guide their sprays and track infection periods. Shoot growth is still underway, so growers need to protect new leaves as they emerge to slow the progression of the disease. Tart cherries are moderately tolerant to copper applications that can help reduce bacterial canker and cherry leaf spot in cherries.

Japanese plum fruits are 14 to 16 millimeters in diameter. European plums are 12 to 18 millimeters in diameter. The pits are not hard. Doubled fruit are common this year. Fruit doubling is due to hot temperatures during fruit bud set and can be traced to weather conditions in 2014. Plum fruit and leaves are susceptible to bacterial leaf spot, but Mycoshield is not labeled for this crop. New symptoms of black knot are reported. These infections took place during last year’s wet spring. Swelling occurs the following year at the site of infection. Growers need to protect the current season’s growth against black knot until shoot growth ceases later in the season. Plum curculio egglaying scars can be found in the area; damage is a threat during warm evenings for a few weeks following shuck split.

Apple fruits are up to 24 millimeters in diameter. The impacts of thinning sprays are very apparent, with varieties in some sites self-thinning down to a small crop. There is a wide variety of fruit sizes on many trees and the smaller fruit will surely fall. 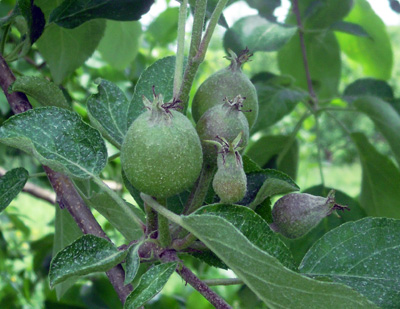 The largest Honey crisp apple in this fruit cluster is just under an inch wide. The smallest fruitlet is turning yellow and will soon fall. The other two smaller apples will also probably fall, leaving just two apples on this spur.

We are near the end of primary scab with mature spores, but not all discharged. Symptoms of apple scab reported May 13 were probably from the April 19 infection period. More scab symptoms from the infection periods on May 5 and May 8 should have appeared now. Growers should scout for scab lesions to assess their control. The next good rain should exhaust the spores, but growers should maintain protection to protect against the rain forecast for the weekend. If no apple scab symptoms are in the orchard, growers can reduce their fungicide applications.

Fire blight symptoms started appearing last week and are probably due to infections on May 8. Oozing blossom blight symptoms will increase the bacteria in orchards. Yellow-white leaf blotches due to streptomycin treatment are common in apples this year, but are not a concern. Some apple growers using Apogee to reduce shoot growth and fire blight spread in young shoots are applying their second or third sprays.

Codling moth adults were trapped as early as May 8 in some locations. Some areas had a later moth flight and biofixed during warmer weather on May 16 and we are about 250 GDD base 50 from that biofix and in the late treatment window. Michigan State University Extension recommends growers use the MSU Enviro-weather codling moth model to time your insecticide applications. Plum curculio egglaying scars were found in apples last week and this pest will be a problem with warmer days and nights late this week.

We are reaching the end of the thinning window as apples approach 1 inch in diameter. With sunny, mild conditions forecast this week, there will be little stress and poor response to thinners. Growers who wish to thin will need to use full or high rates and combination sprays mixing multiple thinners together. 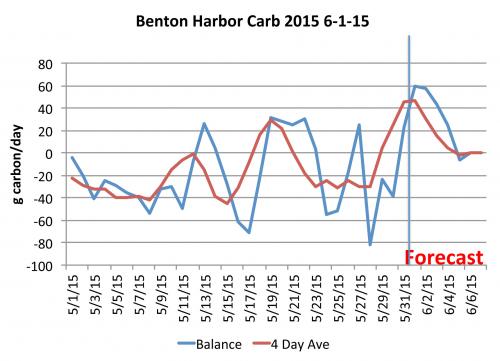 The Cornell Carbohydrate Model for the Southwest Michigan Research and Extension Center in Benton Harbor, Michigan, on June 1, 2015. The model estimates the carbohydrate status of apple trees as affected by current and forecast weather and tree growth stage. Use the four-day average curve to estimate stress and forecast thinning success. The current model forecast is for little stress and positive carbohydrate balance. Thinners will be less effective because the tree is less likely to drop fruit.

Grape shoots are in the 12- to 20-inch range. Several growers have found damage from the late April freeze as damaged shoots and leaves in the low spots of vineyards. Flower clusters are elongating and separating in the bunch. Individual flower buds are separating out as bloom approaches. In wine grapes, shoots are in the 10- to 18-inch stage.

Most grape growers will time a final pre-bloom fungicide application and choose their fungicides to include protection against all the major grape diseases. Grape bloom, the most critical period for disease control, is only about a week away. During bloom, grape flower clusters are vulnerable to infection from powdery mildew, downy mildew, black rot and Phomopsis. The risk of infection from these fungi depends partly on rainfall during bloom.

Grape berry moths are out and the first generation of the year is laying eggs now. Most growers do not need to spray for grape berry moths until second generation egglaying. In wild grape vines, bloom is underway. Approximately 50 percent wild grape bloom timing varies by site, but it occurred around May 26 in Berrien County and June 1 in Van Buren County. This date can be used in the MSU Enviro-weather grape berry moth model to determine ideal timing of insecticide applications for second and third generation egglaying.

Blueberry bloom has ended with the weekend rains. Most fruit is sizing well. Numerous new shoots are emerging from the crowns. Late blooming varieties still have a few blooms. The fruit is sizing rapidly. The crop is variable due to winter injury of the canes and flower buds. Fields that were pruned aggressively last year look better than those that received little or no pruning. We are seeing a wide variety of winter injury symptoms from the cold winter. Most plants look much better as they leaf out. Some shoots are wilting as the season warms up and canes leaf out. Damaged canes are unable to provide enough water to the increased leaf surface and the leaves and stems are wilting and dying. This symptom is not very common and growers have confused this with mummy berry. There have been very few mummy berry shoot strikes this year. The cool weather has also made virus symptoms easy to find if you know where to look. Shoestring and bronze leaf curl symptoms can easily be found on shoots in the canopy and new shoots from the crown. Some winter-injured shoots show a symptom that looks like stunt, but these symptoms are only on damaged canes and not on new shoots growing from the crown.

Cherry fruitworms and cranberry fruitworms are flying. Cherry fruitworms have been flying for about two week and cranberry fruitworm flight began last week. Both moths are laying eggs on green fruit. Some growers have applied insecticides to control these insects and others plan to do so soon. Be careful applying insecticides to control these pests. Most materials have restrictions on application during the end of bloom. Contact your beekeeper and have the hives removed before spraying. Avoid spraying during the mid-day when bees are foraging. Apply pesticide sprays at night or during the early morning or evening hours when bees are not active.

Strawberry harvest has begun in the extreme south. Harvest will progress northward this week. With highs in the 70s all week, fruit should continue to size and ripen. Hot temperatures will cause the fruit to ripen all at once and shorten the picking season.

Raspberries are blooming. Avoid using insecticides during bloom. Apply fungicides when bees are not foraging on the bloom. Scout black raspberries and blackberries for signs of orange rust and remove infected plants.

Our next Monday fruit IPM meeting is June 8 at Fruit Acres Farms, 3452 Friday Rd, Coloma, MI 49038 at 5 p.m. Two Michigan pesticide applicator recertification credits will be given for these meetings.