Apple bloom is ending and blueberry flowers are opening across Southwest Michigan.

Last week started warm and cooled off quickly with highs falling from the mid-80s to near 50 on Thursday and Friday, May 15-16. The passage of a cool front brought several days of rain and a couple of mild frosts on Friday, May 16 and Saturday, May 19 mornings (click on the links to see data from Michigan State University’s Enviro-weather). Clouds moved in and kept temperatures from dropping to damaging levels. The cool weather dramatically slowed plant growth.

Rainfall across the region last week was about an inch over three days. These rains were an infection period for foliar diseases. Soils are moist and soil temperatures have fallen into the 50s. Warmer weather is forecast for this week with highs in the 70s and lows in the 50s. Rain is most possible on Wednesday, May 21, from thunderstorms. We are about a week behind normal fruit development and continue to track closely with 2011. See the growing degree days (GDD) for the last five years at Southwest Michigan Research and Extension Center. Berrien County is still more advanced than other regions in Southwest Michigan.

There was good bee activity during bloom before last week’s cool down. We had damage from the weekend in colder areas, but damage was light. Scattered popup thunderstorms moved across the region Monday, May 19. With warmer weather this week, growers need to be aware of plum curculio when stone fruit emerges from the shuck. Tree fruit are vulnerable to deer browsing on tasty new foliage.

Apricots are out of the shuck and vulnerable to plum curculio.

Peach fruit is in the shuck. In orchards that set biofix for oriental fruit moth on or about May 8, the target window for contact insecticides will be the end of this week. For sites with a later biofix, the cool days and cold nights last week stopped the flight and mating; the result is that growers and consultants can reset the biofix for oriental fruit moth for when they catch moths again.

Where peach scab was a problem last year, fungicides such as Bravo, Captan, sulfur or Ziram can be used to manage the disease. This disease can build up on fruit and twigs in years with incomplete brown rot programs. Pheromone disruption dispensers for oriental fruit moth should be deployed in orchards now. Copper application for bacterial spot management, where used for this disease, should cease by bloom. Growers should scout for western flower thrip activity in nectarines when fruit is in the shuck.

In cherries, sweet cherries are in the shuck or emerged from the shuck in Berrien County. A wide range of crop loads can be seen including much smaller fruit in the shuck that looks like it will not set. Foliage is relatively free of bacterial canker symptoms. Growers need to protect against cherry leaf spot controls now that the leaves are out, and against plum curculio. Sweet cherry fruit is always susceptible to brown rot. Growers are reminded that Michigan State University Extension has found that brown rot resistance to FRAC code 11 fungicides (strobilurins) is becoming more prevalent in the area.

Tart cherries are mainly in the shuck. Leaves are out and growers should be applying sprays to control cherry leaf spot. 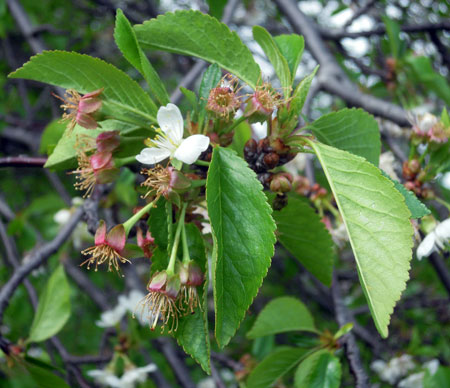 Japanese plums have emerged from the shuck and European plums are in the shuck. Black knot is the primary diseases of concern now with plum curculio a risk once fruit grow a bit larger.

Apples are in late bloom and petal fall for most varieties. Crop load potential is generally good in spite of large crops in 2013. Some growers attribute the return bloom to summer NAA treatments last year. During bloom, there was a lot of variation in bloom density within orchards and on the same tree. Golden Delicious is one of the most variable varieties this year.

Apple scab ascospore catch continues to decline from the peak of two weeks ago. Spore levels are still high enough to infect and require control. Last week was wet and there were apple scab infection periods. Apple scab symptoms from late April and early May should be visible now on spur leaves. Last week’s infections should be visible early next week.

Open blossoms and high temperatures in the 80s were good infection conditions for fire blight. There were predicted fire blight bloom infections on Sunday, May 11, and Tuesday, May 13, for apple orchards which had open bloom on Friday, May 9. Cooler weather last week dropped the fire blight risk to zero. Warmer weather and open apple blossoms will raise the risk again, especially late this week. Check the nearest MSU Enviro-weather station to seek estimations of fire blight risk.

With the warm temperatures, insect activity increased greatly. No insecticides should be used during bloom, but growers should be scouting for insect pests that may need control after bloom. Scout for European red mites, aphids and leafroller pests such as obliquebanded leafrollers. Traps should be out for oriental fruit moth and codling moth. Spotted tentiform leafminer numbers are up.

Pears are in petal fall to 5 mm fruit diameter. Pear scab and fire blight are ongoing concerns. Pear psylla can be found in all stages of development.

Grape shoots have two to three leaves out and flower clusters are exposed in the shoot tip. A light frost Friday morning, May 16, caused only light injury. Generally, only the edges of the leaves were singed by freezing. Shoots and flower clusters were not commonly damaged. Vinifera vines have started to show buds on cordons and trunk after harsh winter caused extensive bud damage. Hybrid wine grapes and juice grapes in many vineyards are showing good shoot growth.

Southwest Michigan GDD summary for grapes from April 1 to May 18, 2014

Now that shoot growth has begun, sprays to reduce phomopsis and powdery mildew should be applied during early shoot growth. Cool, wet weather is good for phomopsis infection. Grape berry moth adults were trapped this last week. It is too early to treat for grape berry moth. Treatment for this pest can begin after bloom when egglaying begins and insecticides are sometimes included in post-bloom sprays. 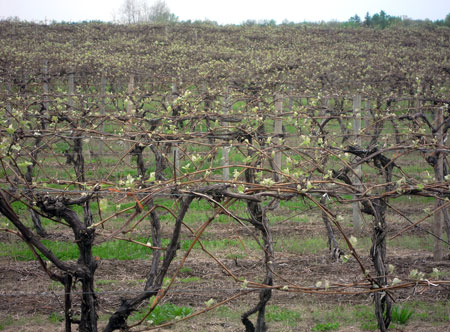 Blueberry leaves quickly reddened in response to the cool weather last week. Bloom proceeded slowly. Early varieties such as Bluetta and Weymouth are close to full bloom, but for most other varieties bloom is just beginning. Growers are busy pruning out winter-injured shoots. In some sites, especially newer plantings with small bushes, growers have cut down the entire bush to focus growth on new shoots from the crown. In some sites, the tops of many older bushes look weak with poor growth while the mid- and lower portions of the bush look fine. Bloom should be opening across the region this week and growers will be able to evaluate both bloom and the amount and growth of leaves on new shoots. It does look like we may have lost leaf buds as well as flower buds to winter cold in colder sites.

Last week’s rains were phomopsis and mummyberry shoot infections in many areas and growers should be scouting for mummy berry shoot strikes. Look for individual shoots that are wilting. Bees and other insects carry the mummy berry spores from the shoot strikes to blueberry blossoms. Bloom fungicide applications are focused on blossom strike infection by mummy berry. Fungicide applications are timed for early bloom to protect the blossoms soon after they open.

Cranberry fruitworm and cherry fruitworm trap catches were reported last week. The approximate timing for biofix is at 350-400 GDD base 50. An accurate biofix for fields should be set by trapping adult moths. It is too early to treat for these pests and the treatment window is usually at the end of bloom. See “Time to prepare for fruitworm management in blueberries” for more information.

Strawberries are blooming. Most growers protected against frosts last Friday, May 16, and over the weekend. Wet, cold conditions can set up angular leaf spot infections. Fungicides to reduce fruit rots and foliar diseases are often applied during bloom. See “Bloom is a critical time for control of Botrytis gray mold in strawberries” for more information.

Bramble primocanes growth from the ground is vigorous. Leaves and shoots are growing on floricanes and lack of leaves and poor growth are indicating winter injury, especially above the snowline. Blackberry canes in most cases were killed to the ground by winter cold and growers have removed them. On raspberry canes with good growth, the flower clusters are emerging. 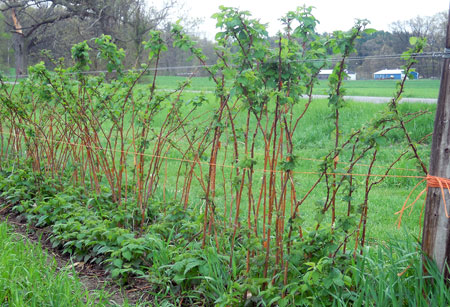 These red raspberries show good primocane growth from the ground. Most of the injured floricanes have already been removed. Photo credit: Mark Longstroth, MSU Extension