A chilly March has held plant development back. Plants are ready to grow when warm temperatures return later in April.

The winter of 2017-2018, was cold compared to 2016 and 2017. The cold temperatures were not as cold as the Polar Vortex years of 2014 and 2015 with lows near and below -20 degrees Fahrenheit. Temperatures during the 2018 winter dropped below zero at the end of December, with some areas reporting lows near -15 F. Growers report this winter cold did cause some damage, but this damage seems minor and localized.

Chilling requirements were completed for many plants during warm periods in January and February. Warm weather in late February caused plants to color up and bud swell was noticed in many plants. Little movement occurred in March because March was very chilly and temperatures rarely exceeded the 42 F temperature, above which many fruit grow. Currently, southwest Michigan is ahead of areas just a few miles to the north where no bud movement occurred.

Below are the growing degree-days (GDD) for the Southwest Michigan Research and Extension Center near Benton Harbor, Michigan, for the last 18 years. Table 1 is from Jan. 1 to April 8 and Table 2 is from March 1 to April 8.

Temperatures for most of March have been cool with lows at or below freezing and only a few warm days. There has been little bud movement since early March. The table below shows how cool March was in 2018. Normally, we would pick up 100 GDDs base 42 and 60 GDDs base 50 in March. In 2018, we only received about 20 GDDs base 42 and only 1 GDD base 50. This was the coldest March in the 18 years for which we have digital records at the Southwest Michigan Research and Extension Center.

The forecast for the upcoming week is for a brief warmup on Thursday and Friday, April 12 and 13, with highs climbing to around 70, followed by a return to cool wet weather.

Temperatures below zero around New Year’s caused damage to some peach and sweet cherry fruit buds in some areas of southwest Michigan. Growers are generally encouraged by the slow start to the season. A slow start delaying bud growth reduces the risk of a damaging freeze in early spring. At this time, most fruit crops are still in the swollen bud or bud burst stage and it would require cold temperatures below 20 F to cause significant damage to tree fruit flower buds (see “Freeze damage depends on tree fruit stage of development”).

Tree fruit crop potentials are generally good. Cool and dry conditions for the last month have held back tree fruit development and allowed growers to make good progress in spring chores, including pruning. Recent rain and snow events have made any fieldwork and spraying difficult. Growers should check blocks for evidence of San Jose scale on branches to determine the need for oil sprays.

Apricots are in bud swell to early red calyx.

In cherries, sweet cherry bud swelling is evident. Montmorency tart cherry fruit buds are still relatively tight. We are still in the window when copper sprays can be applied to sweet cherries. Copper applications may reduce bacterial canker in cherries

In plums, Japanese plum varieties are at swollen bud to early bud burst. European plums are relatively dormant. Thorough pruning of black knot and disposal of the knots by burning is an important step in managing this disease. 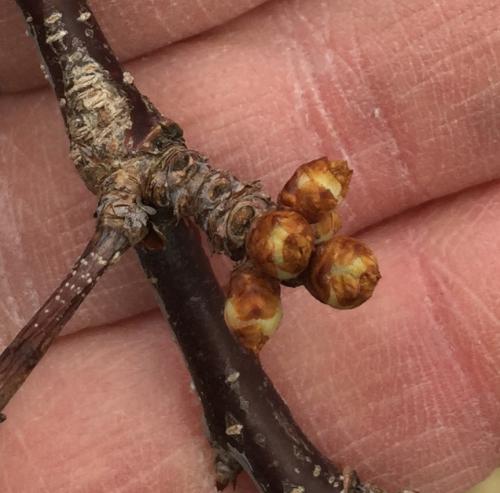 Apples generally show little or no bud swell. The current cool temperatures will allow scab ascospores to mature so that more spores will be available in the early stages of apple development. Copper sprays will be going out soon for early scab control and fire blight suppression.

Grapes have not yet begun growth. There is some concern over winter lows, but most growers who have checked their buds report they still have numerous primary buds and the potential for a good crop.

Blueberry flower buds are only slightly swollen. Leaf buds do not appear swollen but warmer weather will bring on growth, making them susceptible to mummy berry infections. Many growers have already applied copper, Sulforix or lime sulfur products to suppress early season diseases.

Strawberries have greened up but new leaves are not emerging from the crown. Over-wintering mulches should be removed and raked between the rows. Growers are looking at early-season herbicides to control overwintering weeds.