A wintry blast over the weekend did not cause any damage. Plant growth is just beginning, waiting for warm temperatures to return later in April.

Temperatures for the first week of April were cold with highs in the 30s and 40s and lows in the 20s and teens. Last week was warmer. Temperatures rose into the 50s and 60s with lows above freezing and into the 40s. We saw the first bud movement since early March. We should see green growth in southern areas by the end of the week.

A cold front parked over the region last weekend bringing rain, freezing rain, frozen rain, ice and finally snow. Colder than normal weather is forecast to continue for the week, with highs in the 40s rising into the 50s. Low temperatures for the week will be near freezing. These cold temperatures, about 10 degrees below normal, will continue to slow normal spring development.

In general, fruit growers continue to be pleased that the cold weather has held back bud development. Delayed development reduces the likelihood of damaging spring freezes during bloom by pushing bloom later and later to when the possibility of damaging freezes is very small. The forecast for the upcoming week is for continued cold with lows around freezing. A warmup over the weekend with highs climbing to around 60 is followed by continued warm weather.

Continued cool temperatures are holding tree fruit development back, but are not low enough to cause any damage. At this time, most fruit crops are still in the swollen bud to first green stages—development is more advanced closer to the Indiana border (see “Freeze damage depends on tree fruit stage of development”).

These ‘Montmorency’ tart cherry buds are beginning to swell.

Apricots are in red calyx.

Sweet cherry bud swelling is evident. Montmorency tart cherry fruit buds are still relatively tight. We are still in the window when copper sprays can be applied to sweet cherries. Copper applications may reduce bacterial canker in cherries.

Japanese plum varieties are at swollen bud to early bud burst. European plum fruit buds are swelling. Thorough pruning out of black knot and disposal of the knots by burning is an important step in managing this disease. 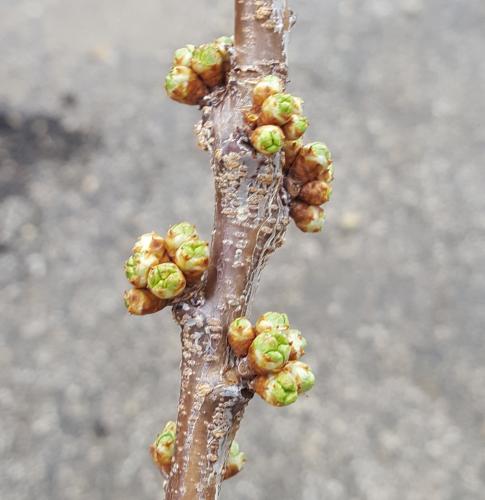 Green tip is the name of bud burst in plums. These green tip buds are from ‘Simka’, an early Japanese plum.

Apples are starting to show fruit bud swelling with first green showing on early developing varieties such as Idared and Zestar in some sites. Scab ascospores were caught in relatively low numbers in two trapping sites in southwest Michigan over the past week. The current cool temperature has allowed scab ascospores to mature ahead of tree development. Copper sprays are useful for early scab control and fire blight suppression.

Grapes have not yet begun growth. There is plenty of time to apply dormant sprays to reduce powdery mildew and other diseases. 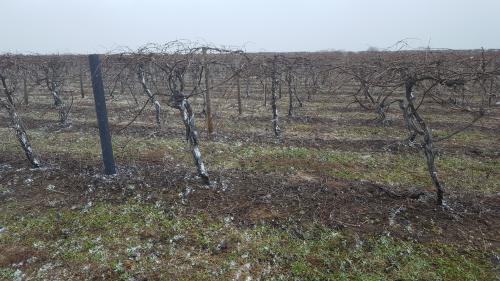 This mechanically hedged vineyard of ‘Niagara’ is still dormant with no bud movement. 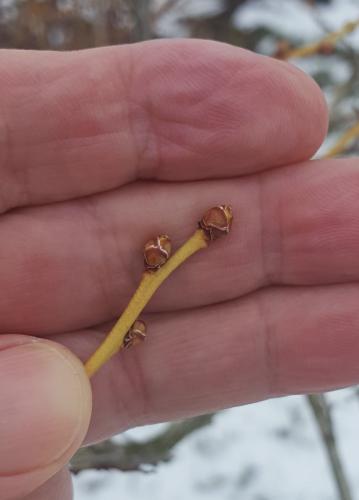 Blueberry flower buds are swollen but have not yet burst.

Strawberries have greened up, but new leaves are not emerging from the crown. Overwintering mulches should be removed and raked between the rows. Growers are looking at early season herbicides to control overwintering weeds.