Widespread damage from recent frost, wild grape bloom may begin over the next two weeks, and continue protecting against phomopsis and black rot.

The morning of May 8, 2017, a freeze throughout the region caused damage to grapevine shoots. Low temperatures ranging from 25 to 32 degrees Fahrenheit were recorded in the mid-morning hours on different farms. Damage is widespread, but variable. Many vineyards experienced no apparent injury; others lost 90 percent of primary shoots; and everything in between.

The level of damage appeared to depend on how advanced the vines were, distance to Lake Michigan, relative elevation and wind direction. In general, Concord and Niagara vineyards were more likely to experience severe damage because their shoot growth was longer during the freeze.

Concord and Niagara are in the 3- to 5-inch shoot stage. Wine grapes are 1-6 inches, depending on the variety. Some vinifera stopped in the late bud break stage due to the cool weather the week of May 1, and only just began to put on a few inches of shoot growth.

The first phomopsis lesions have become visible on the bases of shoots in some vineyards. No other disease symptoms were seen. We are still in the early-growth phomopsis infection period, and leaves are also susceptible to black rot infection during rainy periods, especially in vineyards where black rot mummies have been left in the canopy. Michigan State University Extension advises to protect when necessary with EBDC fungicides. Susceptible varieties should be protected from powdery mildew with products active on this disease. 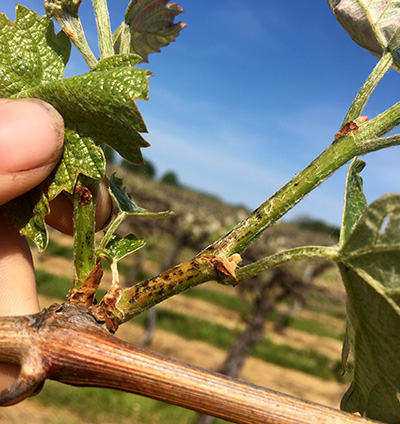 Phomopsis cane base lesions on a young shoot.

Brown marmorated stink bug and grape berry moth are being trapped in vineyards, but there should be no need to treat for either pest at this time. Late-breaking varieties are still vulnerable to feeding from grape flea beetle and climbing cutworm for another week or so.

For use in MSU Enviroweather’s grape berry moth model later in the season, growers should begin checking wild grape on their farm and record the beginning of bloom.