Cool, rainy weather delays harvest and set up bunch rot diseases. Wine and juice grape growers are waiting for sugar levels to rise to begin harvest. We have the potential for a very large crop of Concord and Niagara grapes.

The southwest Michigan grape industry is based on more than wine production. Juice grapes comprise 94 percent of the 13,250 acre grape acreage in southwest Michigan. Wine grapes compose about 5 percent of the region’s grape acreage. Damage to wine grapes is spotty and depends on variety and vineyard site. While vinifera damage varies from moderate to severe, generally French hybrid grapes have a good crop. While production of some varieties was reduced by winter cold, wineries entered 2014 with good inventories of wine and look forward to a profitable year. So the impact of weather in 2014 will be felt economically by some wine grape growers, rather than the wineries.

Weather continues to impact grapes as wet cloudy weather reduces sugar accumulation and delays harvest. Warm dry weather in the fall can have a significant impact on how the 2014 grape crop is remembered. 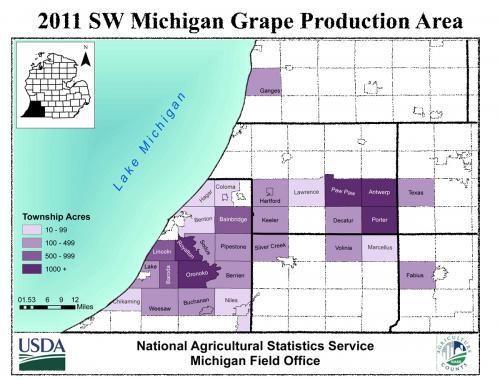 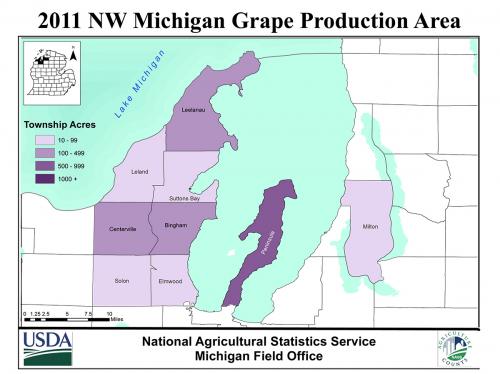 Weather the last two weeks has cooled down with high temperatures falling from the 80s through the 70s into the 60s. Storms and showers have moved across the region and cool, wet weather is forecast over the weekend.

Weather has had a significant impact on grapes from the beginning of the year. Extremely cold weather with low temperatures on Jan. 3 and Jan. 8 dropped temperatures below zero into the range that can damage cold tender grapes. These cold temperatures caused significant damage to vinifera grapes especially away from Lake Michigan and at lower sites with poor air drainage. (See “Winter weather update for 2013-2014.”)

Vinifera grapes are generally considered cold tender and the varieties grown in Michigan is restricted to sites where reliable production is expected. Sites are restricted by the winter cold temperatures that can be expected at a potential site. Generally, sites that drop to less than zero regularly in the winter are considered too cold for vinifera. Cold hardy vinifera varieties can withstand temperatures below zero depending on variety temperatures down to -10 degrees Fahrenheit will cause damage. Like other fruit, grape production is restricted to locations close to Lake Michigan which moderates winter cold. 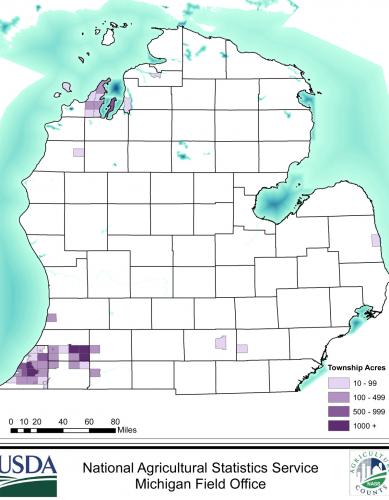 Spring growth revealed damage to vinifera in many sites, but vinifera in good fruit/grape sites especially in Northern Berrien County still set a good crop. The spring of 2014 was later than normal, delaying bud break and the danger of spring frost damage. There were no significant freezes in the early spring. After bloom, high yields were visible in many vineyards of juice grapes.

The cool, wet spring was a mixed blessing as the moisture allowed good growth and reduced stresses on vines, but also allowed many diseases to become established as grower struggled to maintain disease protection with fungicides. Downy mildew was especially a problem on susceptible varieties. (See “Weather is ideal for downy mildew on grapes at this time” for background on the disease and controls recommended by Michigan State University Extension.)

Southwest Michigan GDD summary for grapes from April 1 to September 10, 2014

Berry size is very large and many grape growers have a heavy crop, especially in juice grapes. Niagara harvest is currently forecast to begin about Sept. 20, but the actual start date will depend on the sugar level in the vineyards. Some early French hybrid varieties have already been harvested. Rainy conditions and large berry size has resulted in berry splitting and bunch rots. With ripening fruit and wet conditions, wine grape growers need to protect against Botrytis bunch rot. (See: Don’t let bunch rots ruin your grapes.)

Grape berry moth has not been a major pest. Grape berry moth biofix was set as May 29 in Berrien County and June 2 in Van Buren County. Egglaying for the third generation of grape berry began in early August and most growers sprayed for this pest. Because of the low hours of daylight, moth larvae will prepare to diapause and over winter rather than produce a fourth generation of grape berry moth in southwest Michigan this year. Numbers of soybean aphids in soybean fields has been high in some areas and growers should be aware that multi-colored Asian ladybeetles could be a harvest problem.

The major concern is being able to make sugar to allow a timely harvest before the first frosts of fall bring harvest to an end. Rains delay sugar accumulation is two ways. Water increases berry size and dilutes the juice in the berry reducing the sugar and cloudy days reduce photosynthesis and the production of sugar. Last week, we picked up about 125 growing degree days (GDD) base 50, about 18 a day. GDD accumulations lag behind our long-term average, but similar to 2011 and ahead of 2009. See the GDD’s for the last five years at the Southwest Michigan Research and Extension Center in northern Berrien County. What growers really need is several weeks of warm, dry weather.

The bottom line is that Mother Nature has dealt the grape industries in southwest Michigan several hard blows in 2014, but the season is not over yet. The weather conditions in the final month of the season and will determine whether growers make some money or need a crop insurance payment for the loss of the 2014 crop. Meanwhile, wine drinkers can still enjoy our Michigan wineries.