The 2012 growing season is on track to be one of the worst in southwest Michigan since records have been kept. That is not to say that there are not some areas that have been graced with small amounts of rainfall to keep the crops alive for another week. But on balance, we have seen some of the most severe drought conditions that "seasoned" growers can remember. Many growers say that this year's drought is more severe in many locations than the drought in 1988. And, like most weather-related phenomena, there are several things that are different between this event and the one in 1988.

For one thing, there is more water in ponds, lakes and wetlands at this point in 2012 than in 1988. For another, there was enough surface moisture this year (for the most part) to get crops off to a great start, and keep them growing through the early vegetative growth stages. This tends to take the moisture out of the cropland quickly as soon as the plants become large enough to extract moisture from a greater depth.

Both seasons were hot as well as dry. Precipitation levels in April, May June and July to this date are remarkably similar. It appears that the moisture levels in the subsoil were perhaps not as fully saturated as normal going into the growing season this spring. Record warmth and relatively dry conditions in March, coupled with warm and dry conditions last fall, may have left soil moisture at depth somewhat lacking.

All of these factors have lead to a rapid depletion of plant available water and the severe stress we have seen today. In addition, the southwest region has had very little cloud cover. The intense sunlight, coupled with several bouts of high temperatures and steady to moderate wind speeds have helped to further exacerbate the challenges. In 1988, the Kalamazoo area received a significant rainfall event in the latter part of July and several throughout August, which broke the drought and brought relief to surface water levels. Let's hope that this sort of pattern shift can help us again in 2012.

The weather forecast shows a little stronger chance (40 percent) for showers and thunderstorms on Friday/Saturday and Sunday (July 13-15). This is better than the outlook that we have seen over the last couple of weeks but it remains to be seen how widespread of an area will receive beneficial rainfall.

Hot temperatures have returned to the region over the next several days, with high temperatures expected in the 90's. This has turned up the moisture stress levels in fields back from the high to extreme levels during this period. The 6-10 day and 10-14 day outlooks shows all of southwest Michigan in the above normal temperature regime. However, the 6-10 day precipitation shows the region in the above normal category, and the 8-14 day outlook returns to a normal precipitation regime, with more rainfall expected in the eastern and northern portions of the region.

Corn primarily comes in two conditions in Van Buren and Cass Counties: irrigated or burned up. While there are pockets of soils and fields that benefited from sporadic widely scattered thunderstorm rains, they are limited. I expect that on average, most dryland fields will have lost about 50 percent of their yield potential going into the critical pollination period. Many of the fields planted on lighter soils (which we have a lot of) have 80-90 percent losses at this point. How much further damage will occur will depend upon the extent of the stress over the next two weeks. With temperatures in the 90's and low relative humidity levels, the potential evapo-transpiration (ET) for corn is sky high right now, probably approaching 0.30 of an inch per day of water usage on our irrigated crops. Even those fields that have seen sporadic rainfall will be in trouble without adequate rainfall soon. 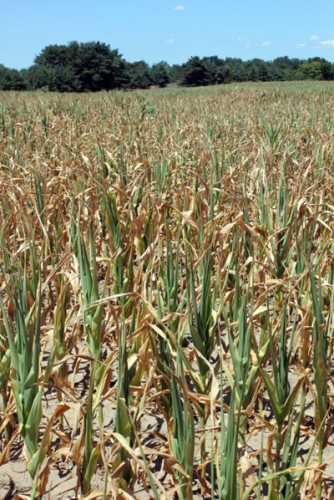 Early planted irrigated corn is at silking right now. Irrigated corn looks excellent to the extent it has been watered. On the pest front, western bean cutworm moths are actively laying eggs in fields and have been over the last week. Egg masses are fairly prevalent in irrigated fields. Look for egg masses near the ear leaf on fields that are just prior to tassel emergence. Treatment threshold is when 5 percent of the plants show egg masses. You may have to scout several times as the egg masses will hatch quickly with these temperatures. Optimal treatment time with insecticides is when about 95 percent of the tassels have emerged. This pest is quite sporadic in its distribution, so definitely scout fields and assess populations before treating. 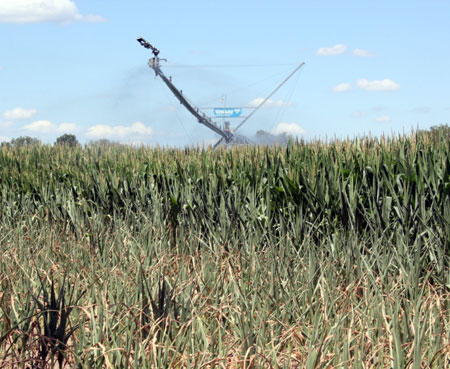 In foreground nearly tassel stage corn, with an irrigated field
for comparison. 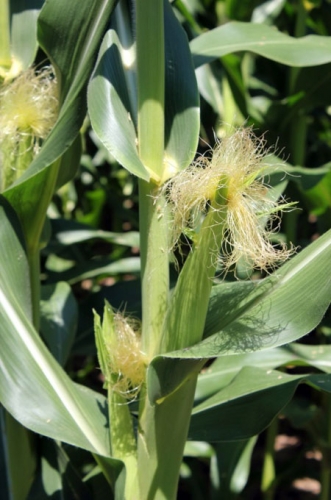 The soybean crop is definitely a different story as compared to the corn. While fields are suffering from the same extreme heat and severe drought stress, soybean plants are much more capable of tolerating stress early in the season as compared to corn. The roots continue to grow, which gives the plants more potential to recover if future rainfall should occur. We do have some fields of soybeans that have been stressed to the point of stand loss. However, there are lots of fields that while they look tough, still have reasonable potential to produce a portion of a crop.

Near term rainfall is pretty much a must for recovery on the lighter textured fields. Irrigated soybeans look good, with plants at the R2-R1 growth stage for the most part. We need to watch for spider mites and be prepared to make a decision if it is worthwhile to control them in droughty fields. Irrigated fields are not immune to this problem. Irrigation will likely not produce enough humidity to help pathogenic fungi to control these pests. Watch for bronzing or yellowing patterns in the fields, particularly along the fields edges. Soybean aphid numbers have also been creeping up in some irrigated fields. Still well below the threshold of 250 aphids per plant.

Alfalfa production has also been severely impacted by the dry weather and heat. The second cutting was harvested on most fields before the worst effects of the drought impacted alfalfa growth. Some growers have clipped the stunted third cutting in hope that it will spur regrowth in the event of rain. Mixed hay fields have been mostly dormant. First cutting was very light due to the impacts of frost. Most livestock producers will be short of forage if they are not irrigating substantial portions of their acreage. Late planting of sorghum sudangrass and other crops may provide opportunities for producing late season feeds.