Soybean maturity group and yield – Experience from the Thumb

How did soybean maturity group relate to yield in Michigan’s Thumb?

My colleague, Mike Staton, wrote an article in September 2017, “What is the relationship between soybean maturity group and yield?” He used multi-year data from the state-wide Soybean Performance Reports and wrote that his analysis supported the current Michigan State University Extension recommendation for planting high-yielding and pest-resistant varieties from a range of adapted maturity groups each year. I thought it would be useful to use a different set of data, namely MSU Extension Thumb Ag Research and Education (TARE) trial data from 2011 – 2015 to conduct a similar analysis. If you haven’t yet read Staton’s article, please do so before continuing with this article.

In my analysis, I averaged the three highest yielding varieties in each maturity group to represent the yield of that group for each year. Data from the Roundup Ready soybean and Liberty Link soybean trials were used. If there were not at least three varieties in each group for a given year, I dropped that group from the calculations and analysis.

The TARE trials consisted of four soybean sites each year during 2011 – 2015: one each in Huron, Tuscola and Sanilac counties, and Lapeer or St. Clair counties. Participating seed companies were free to enter whichever varieties they wished to showcase within the growing area. Table 1 indicates the total number of Roundup Ready and Liberty Link varieties entered each year.

The following table contains the information I collected.

In 2011, 2013 and 2014, there was no correlation between yield and maturity group when the yields of the top three yielding varieties were averaged across locations for the year. In 2012, there was a positive relationship between yield and maturity group. As with the rest of the state, 2012 was a drought year across much of the region. Later varieties were able to take more advantage of later season rains.

Years 2014 and 2015 were both white mold years, with 2014 being spread across the state and 2015 more localized. In 2014, there was, again, no correlation between maturity group and yield. I suspect that because the white mold was so severe and the inoculation period so extended, that all maturity groups were affected.

In 2015, there was a negative relationship between maturity group and yield. That is, earlier maturing soybeans tended to yield better than later maturing varieties. The 2015 trials were also planted earlier than the other years. Likely, the earlier varieties were nearly completely podded at the time the white mold hit, as compared to the later maturing varieties, which were likely still flowering at the time the disease hit. 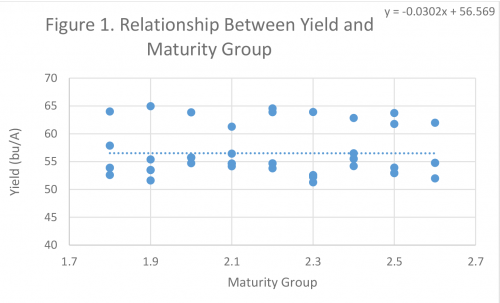 Figure 1. The relationship between all the top three yielding varieties in each group across years.

As you can see, there is no relationship between maturity group and yield across the five years of data. This reinforces what Staton found in his analysis: consider planting high-yielding and pest-resistant varieties from a range of adapted maturity groups each year. Also, when you plant an extra early-maturing variety in that field that you want, make sure it can be planted to wheat in the fall, as there may be no penalty in yield at all.

This analysis was made possible by the generous funding of participating seed companies, and the Michigan Soybean Promotion Committee.

Identifying and mitigating the risks of ultra-early soybean planting