As dairy producers, we like our spots, but the spotted knapweed is definitely not on the good list. 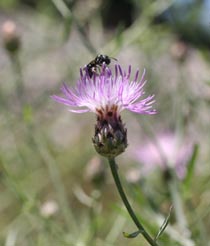 Spotted knapweed has become a major pest for livestock owners, often infesting both pasture and hay fields and competing with legume crops. They are especially a problem in pastures where livestock prefer not to graze on this weed. The weed is also allelopathic, releasing chemicals into the soil that interfere with the growth of other plants, thus reducing forage quality and quantity.

Spotted knapweed is a short-lived perennial that reproduces by seed. Each year, overwintering plants form a new shoot from a taproot. Seed producing, purple flowers are solitary on shoot tips ranging from 1 to 3 feet tall and flower throughout the summer and into the fall. Seeds can last 5 or more years in the soil. Spotted knapweed can thrive in a variety of soils. Knowing the biology of the plant is important to its control.

Biological control possibilities have been studied in several states in the north central area and in the west. Insects having a detrimental effect on knapweed have included both flower feeding and root feeding insects. These methods continue to be researched, including research conducted at Michigan State University by Dr. Doug Landis. Biological control would also involve grazing, but as mentioned earlier, grazing animals prefer not to graze this plant so paddocks must be kept small with adequate animal pressure to ensure that all plants get grazed. Grazing control is most effective in the spring when plants are 6-12 inches tall.

Cultural control includes tillage and the use of crops that would compete well with spotted knapweed. Cover crops may be used to try to suppress spotted knapweed growth and keep the plant from going to flower before cutting the cover crop. The most likely candidates for this method would be brassicas and buckwheat. In both of these cases multiple crops and shallow tillage would likely be needed. Spotted knapweed does not tolerate tillage so crop rotations that include row crops will drastically affect populations, but remember knapweed seeds can last 5 years or more. Trying to manage spotted knapweed with cutting alone has not been proven effective. Any blossoms below the mowing height will set seed and reproduce.

One upside of spotted knapweed is that it does provide a pollen and nectar source when there aren’t many other plants flowering. Local honey growers have relied on this flowering plant in years when weather events have drastically reduced or shortened flowering times on other trees, flowers and shrubs. With nectar that has a bitter taste, however, some suggest that quality of honey is lowered. So replacing spotted knapweed with brassicas and buckwheat may have even more merit.

Finally, probably the most important management practice with spotted knapweed is prevention. Since this invasive weed spreads by seed, growers need to be extremely careful that they are not contaminating clean fields. Hay equipment and vehicles can easily transport seed from infested to clean fields. Growers should manage their cutting rotation of fields and clean equipment after harvesting infested fields. If an infestation starts in a field, addressing the problem quickly can save producers the money that a total field renovation will cost.

Want to listen to this article? The audio version is available on the Dairy Moosings Podcasts website.

Keeping Land-applied Manure in the Root Zone - Part 1: Sediment and Contaminant Runoff (WO1036)

Legacy of the Land