As spring officially arrives, there are some lawn care activities that are timely and others that should wait.

The recent spurt of warm weather has rid most of Michigan of snow cover, and with the official start of spring arriving this weekend (March 20, 2015), many weekend warriors may be venturing outside to do something, anything in the yard. Spring lawn care sometimes reminds me of the game many of us played as kids, red light-green light. So in that spirit, here is the spring lawn care version of red light-green light.

Upon first sight in the spring, many lawns look less than perfect. Similar to last spring, many of the same culprits were at work over winter destroying or at least blighting turf (see “Winter damage to lawns: Molds, moles and voles” from Michigan State University Extension). I was surprised to see significant amounts of gray snow mold injury in mid-Michigan this year even though snow cover was only in place for approximately two months. Traditionally, we’re told that gray snow mold becomes problematic in regions when snow cover is in place for three months or more; apparently Mother Nature wasn’t counting.

To facilitate quicker regrowth, lightly rake the turf with a leaf rake, not a garden rake. Raking will remove some of the dead, blighted leaf blades and facilitate turfgrass recovery from snow mold. However, even if you decide you’d rather watch the basketball tournament than rake the lawn, the turfgrass will recover as temperatures warm.

In addition to raking up some debris and generally cleaning up the lawn, another item to check off your list would be mower maintenance. If you didn’t sharpen the mower blade at the end of last year prior to tucking the mower safely away in the garage for its long winter hibernation, now is the time to sharpen blades. You might even want to consider a mower tune-up. There are few things that are guaranteed, but one might be that if you need mower service, scheduling an appointment now will result in quicker service turnaround than the first couple weeks when everyone starts mowing and realizes they have a problem.

With respect to making crabgrass pre-emergence applications to turfgrass, it’s still too early. Summer annual grasses such as crabgrass require proper soil temperature and moisture to germinate and establish. Eighty percent of germination will occur when the 0- to 2-inch depth soil temperature is consistently reaching 60-70 degrees Fahrenheit. Currently at the MSU Hancock Turfgrass Research Center, the 2-inch soil depth temperature is 32 F.

Another great tool for monitoring and predicting when to apply pre-emergence herbicides for crabgrass control is to use growing degree days (GDD). We have a GDD model available at GDDTracker.net that uses GDD to indirectly measure soil temperatures in a turf situation (enter your zip code above the map and click on the Crabgrass PRE button). As with all models, discretion and understanding of local conditions should be considered.

The target range for this model attempts to predict when the 0- to 2-inch depth soil temperatures consistently reach 50-55 F and therefore provides adequate time for the pre-emergence herbicide to be applied and watered in before crabgrass germination occurs. Currently, our GDD model for East Lansing, Michigan has accumulated 93 GDD; the optimum range for pre-emergence applications is between 250 and 500. Needless to say, it’s going to be at least a couple weeks if not more before we’re in the optimum application window. 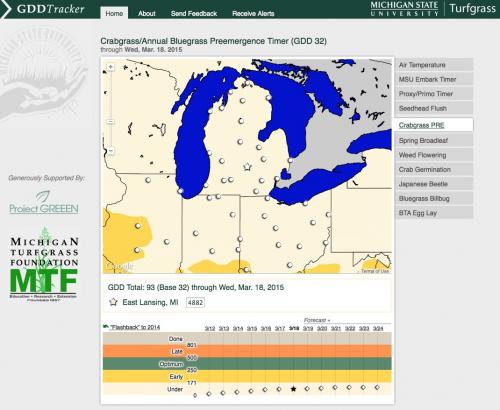 For early season fertilizer applications, I would suggest you resist the urge to apply now and wait until the turf has fully greened-up and actually started to grow to the extent that mowing is necessary. Soils are still very cold and until they warm, the turfgrass is not going to be actively growing nor taking up nutrients.

Be careful rolling lawns this time of year as there are still many soppy, wet areas where rolling might actually do more damage than good. Rolling saturated soils can result in soil compaction. Rolling is popular this time of year to flatten out mole tunnels and lumps and bumps from frost heaving during winter. Although rolling will definitely help with mole tunnels, a good rainfall after soils have completely thawed is as effective or more so than rolling for smoothing out the irregular surface that winter often creates.