Squash vine borer moth can be disastrous for small-scale vegetables growers and a nuisance for large-scale producers.

The squash vine borer is a moth belonging to a group called “clearwing” moths. This is because the adult moths have transparent wings that are an adaptation to avoid predation by mimicking the appearance of wasps (Photo 1). Female moths lay red, disc-shaped eggs from mid-June to late July near the base of cucurbit plants (Photo 2). They are similar to squash bug eggs, but are laid singly instead of in tight clusters, are smaller and are laid at the bases of stems, not on leaves. Eggs hatch in about 10 days and larvae bore into vines within hours. Larvae feed for 25-27 days and then leave plants to pupate 1-6 inches under the soil. Moths emerge from these pupae the next summer. In Michigan, there is one generation of squash vine borer per year.

Damaged plants wilt in the daytime. Borers will not kill the plant right away because they need the vine’s protection to complete development, but their damage can be so severe that a strong breeze can break plants clean from their root crowns. Some strong vining cultivars will set adventitious roots at leaf nodes that can help stabilize the plants in high wind and maintain a supply of nutrients to the plant’s extremities when borers have damaged the main stalk.

Sometimes larvae will bore into individual vines instead of the main stem, and only that vine will be affected. Signs of larval activity in the vine are evidenced by their sawdust-like frass they push out of their entrance hole (Photo 3). 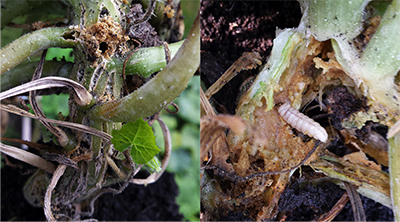 Lesser peachtree borers, peachtree borers, raspberry crown borers and grape root borers are all related clearwing moths that are economic pests of fruit crops. These species may be captured in squash vine borer traps, but vine borers can be differentiated by their furry orange rear legs and their uniformly orange abdomen interrupted by a series of black dots along their center. There are no other moth pests of vine crops, but bacterial wilt transmitted by cucumber beetles can also cause daytime wilting along individual vines and plant death as well.

To determine the pest pressure, small-scale vegetable growers can scout for eggs and frass. Eggs and larvae can be mechanically removed from vine surfaces or carefully cut out of vines. However, doing surgery to remove larvae can invite secondary disease infections. Alternatively, small and large-scale growers can use the Michigan State University Enviro-weather squash vine borer model to time pheromone trapping to monitor the emergence of moths from their overwintering pupae. Trapping adult males tells you when the moths are mating and laying eggs, letting you know it is time to scout your field and implement control measures (Photo 4). 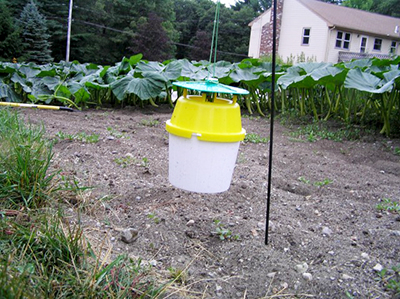 Photo 4. A squash vine borer pheromone trap deployed properly at plant level will intercept males as they try to mate. It won’t catch them all and only serves as an indicator that eggs are being laid by females. Photo credit: Joel Holland, www.hollandsgiants.com

Once eggs hatch, larvae quickly bore into the plant stem where foliar applications of insecticides cannot reach them. This occurs well after any systemic insecticide activity remains from seed treatments or planting-time soil drenches. Only foliar contact insecticides are labeled for this pest (Table 1), and Michigan State University Extension recommends they be applied before the larvae bore into vines.

Insecticide spray programs should be focused on the bases of the plants with drop nozzles and applied every seven days for two or three weeks as long as flying adults are captured in traps. If you apply insecticides for this pest every year, consider an annual rotation between chemicals with active ingredients from IRAC codes 3A (pyrethroids), 6 (avermectins), 16 (insect growth regulators) and 28 (diamides), such as Assail, Athena, Brigade, Endigo ZC, Belt*, Gladiator or Vetica*.

Releasing natural enemy insects for biological control is not effective, but other biocontrol agents have been employed successfully. Entomopathogenic nematodes (Steinernema carpocapsae or S. feltiae) and Bt (Bacillus thuringiensis) applied with similar timing as conventional insecticides were both found to have comparable efficacy to endosulfan in South Carolina, according to Canhilal and Carner, 2006, 2007.

Destroy old plants in the fall by pulling and trashing, hot composting or cultivating residue into the soil. Larvae will pupate and overwinter if infected plants are left intact, and can infest nearby plantings the following summer.

*Note that the EPA announced an intent to cancel registrations on products containing flubendiamide in 2016, but is allowing for draw down usage for products in hand.