The severity of this insect-vectored, sweet corn disease could be low to moderate this year, based on winter temperatures.

Here are the average temperatures from Dec. 1, 2016, to Feb. 28, 2017, at selected Michigan State University Enviro-weather stations:

The bacteria that cause Stewart’s wilt (Erwinia stewartii) is vectored by corn flea beetles (Chaetocnema pulicaria) that overwinter in the soil in fence rows and other areas around your field and feed on young corn plants in the early season. The small, shiny black beetles are very active, and jump around the plants. Similar to cucumber beetles, a small percentage of these flea beetles survive the winter with the Erwinia bacteria in their guts. They can transfer the bacteria to sweet corn plants through their feces getting into feeding wounds. Once a plant is infected, other beetles can pick it up and transfer it to more plants. The bacteria do not harm the beetles.

The bacteria form colonies in the vascular tissue of sweet corn, which block water and nutrients from flowing through the plant. Symptoms can be found at all crop stages. The initial beetle damage looks like scratches or scrapes on leaves. Young corn plants can die from severe stunting, and wilting. On older plants, the bacteria create a leaf blight identified as yellow to brown streaks along the length of the leaf, parallel to the midvein. The length of the streaks determines how susceptible a variety is to the disease. Damage is more severe after warm winters because more flea beetles survive.

Corn flea beetles are related to a complex of other flea beetles that feed on a variety of other vegetables, including cole crops, potatoes, eggplant and tomatoes. Nutrient deficiencies can sometimes cause striping that is parallel to the midvein, but are often accompanied by additional colors at the tips and edges of leaves. The northern corn leaf blight fungus can also cause long lesions parallel to the midvein, but are usually cigar-shaped, and sometimes with dark powdery sporulation at their centers. 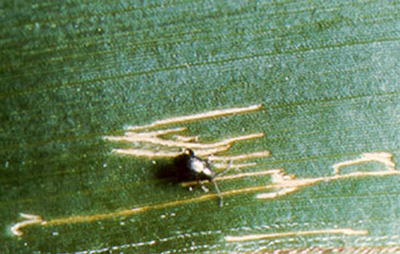 Corn flea beetles leave scratches on corn leaves as they feed. The wounds are infected by beetle frass. Photo: University of Illinois at Urbana-Champaign, Bugwood.org.

Fungicides are ineffective against this disease. Symptom severity is directly related to winter survival of flea beetles. Predicting survival of the overwintering population can be made by monitoring the average temperature across December, January and February. Data from the Michigan weather station closest to your location can be found at Enviro-weather.

Another way to reduce disease pressure is to choose cultivars with genetic tolerance to the bacterium. Treated seed and furrow-applied systemic insecticides can also protect young corn plants from beetles.

Scout 20 plants in 10 locations. In susceptible varieties, treat with a foliar insecticide if more than six beetles are found on 100 plants. In tolerant varieties, treat after 25 percent of seedlings show severe feeding damage, and two beetles per plant are found.