Large wind energy farms can be very controversial. But in some communities they are not. This is the second of two articles exploring some of the reasons why.

Large wind energy generators, or wind farms, can sometimes be some of the most controversial issues in a community. In other cases they do not generate much concern at all.

Research suggests a significant part of the difference is a community’s and developer’s ability to provide meaningful education, collaborative discussions, with a strong public participatory process very early in the process according to Peggy Kirk Hall, J.D., and Assistant Professor at The Ohio State University.

In this second of two part article on the topic the focus is on things a community can do to further understanding and possible consensus – pro or con – on the wind energy issue. In part one, the focus is on the research about the reasons why it may be controversial and the factors contributing to opposition.

In Hall’s webinar presentation, she presented the following points for a community which may be addressing a proposed wind energy project. First and foremost, the legally required process is not enough. The public hearing about a submitted application may be the worst way to engage the public. In Michigan, the hearing takes place too late in the process. Also the format of the hearing does not accommodate addressing the factors behind any opposition. 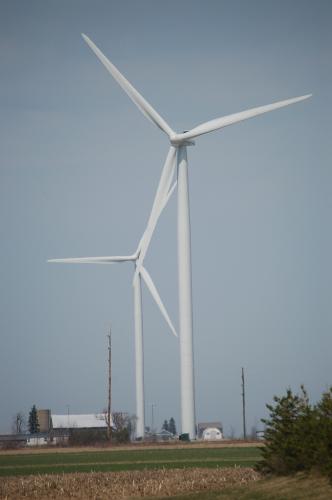 Rather start an education process early –before an application is even submitted. Education should be about: (1) wind energy generally, (2) the specific wind project including things such as siting issues and (3) about the project developer. This education should be done by a trusted third party. Not the developer, not the local government, not the local chamber or economic development office all which may be perceived as on one side of the issue. This may be a role for Michigan State University Extension, a community college, other university, League of Women Voters or similar organizations.

Education – early on before the project application or land easement acquisition starts – is to increase awareness and to inform people. Reproducing academic research and studies can be an effective educational tool. Education should not have a goal to convert or persuade one to oppose or support a wind energy project. It needs to be neutral and by a trusted third party. Such efforts can include open houses with experts or a storefront where representatives of the project are accessible. Tours of existing wind farms may also be an effective technique.

There needs to a participatory process with all stakeholders for addressing issues. This also means interaction, conducting one-on-one meetings. Ideal is when the developer comes out to a person’s farm or home and talks with the resident. The discussion, project planning and problem solving needs to be a collaboration. But the developer must be willing to address individual and stakeholder concerns and willing to negotiate. The more a developer engages, the less distrust is likely to exist.

Local government can compile a team whose job it is to identify the various issues for a specific wind energy project. The team should include stakeholders representing the various viewpoints that surface in the community. Activity may include conducting additional studies. That team effort can then lead to development of solutions. This should also happen early in the process. Part of the function of such a team is to engage in “collaborative problem-solving”: people involved sharing perspectives, defining issues and interests, exploring different options and evaluating and modifying options to reach an agreement. This team might be a community advisory panel that has direct involvement in the design and siting of the wind energy project. This can be reflected in project revisions (shown in the project application for local government approval). It may also result in revisions to the local regulations about wind energy.

Even with these practices in place, the conflict and disagreement in a community may be too intense. In those cases one might consider a third party mediator. One example Hall pointed out is the United States Institute for Environmental Conflict Resolution (part of the Udall Foundation). Part one of this series focused the research about the reasons why wind energy may be controversial and the factors behind opposition.