Striving and stumbling towards sustainability amongst pandas and people

Understanding how achieving one of the 17 UN Sustainable Development Goals spins off more SDG success – or sabotages progress on another goal across spatial and administrative boundaries.

The path to global sustainability isn’t a one-way street and scientists at Michigan State University and in China use the world’s adoration of pandas to show new ways to figure out how not to get lost.

The group scrutinized the complex, vast enterprises that feed the boundless love of giant pandas that bring tourists to the Wolong Nature Reserve and other reserves in remote southwestern China, and the successful operations that loan the cuddly bears to zoos all over the world. The goal: understand how achieving one of the 17 United Nations’ Sustainable Development Goals (SDGs) spins off more SDG success – or sabotages progress on another goal across spatial and administrative boundaries, as well as unforeseen consequences.

But that’s only the beginning, says the group writing in Science of the Total Environment. They employ a new integrated framework to systematically and comprehensively examine human- nature interactions across space. The metacoupling framework integrates how humans and nature interact within a specific place, between adjacent places, and between distant places around the world.

“Previous research indicates that efforts towards the SDGs have an inherent tendency to achieve one at the cost or benefit of others in a specific place,” said senior author Jianguo “Jack” Liu, Rachel Carson Chair in Sustainability and director of the Center for Systems Integration and Sustainability. “but it is not clear how SDGs interact across boundaries although the world is increasingly interconnected among different places and the SDGs need to be achieved everywhere. To fill such an important knowledge gap, we have developed new ways to understand SDG tradeoffs and synergies within and across boundaries. Interactions between pandas and people are very useful for exploring this new interdisciplinary frontier.”

To find the synergies and tradeoffs that swell around panda endeavors, the group examined a wide range of information surrounding tourism in and around Wolong, as well as 19 other panda reserves in Sichuan Province who were visited by more than 8.2 million tourists annually. They discovered that tourism brought nine synergies amongst the SDGs, with various aspects of economic growth being promoted, which in turn alleviated poverty, raised incomes, improved infrastructures. One SDG took a hit, as hiking trails for tourists disturbed crucial panda habitat.

From 1996 to 2017, Wolong implemented international collaboration agreements with 14 zoos in 12 countries and 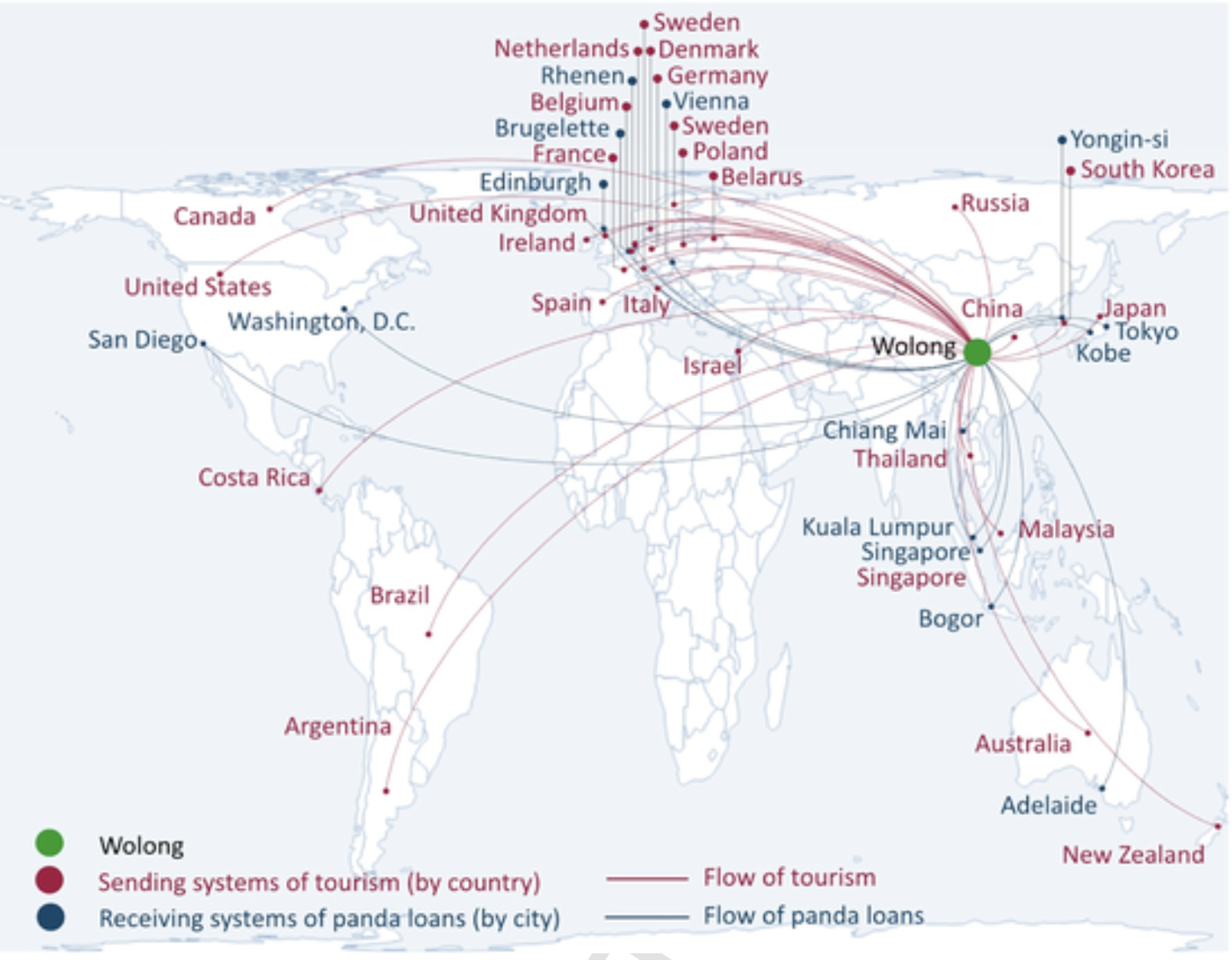 sent 28 pandas to those zoos, and that effort created win-win situations for SDGs, both providing economic boosts as well as funding scientific research and supporting training bases for panda reintroduction.

The authors further revealed that the benefits spilled over beyond the reserves’ borders, as people who live outside created businesses and made money supporting the tourism effort. Hitting one SDG had the domino effect of providing progress for other goals as people found jobs and improved their lives. The industry that took a chunk out of another goal was the collection of medicinal herbs. While that provided economic benefits to people, that activity damaged natural habitat.

The panda loans, they found, have generated income that has enhanced scientific research – and then generated positive results that have spilled over into benefits for other reserves to have more resources for conservation, which in turn allowed more pandas to be reintroduced in the wild and boost genetic diversity.

“We have found many more synergies than trade-offs when it comes to striving for Sustainable Development Goals,” said Zhiqiang Zhao, lead author of the paper. “It is important to cast a wide net when understanding what battles we are winning in sustainability, and what wins may be at a cost of another important goal. Only then can we make necessary adjustments.”

Besides Liu and Zhao, the paper “Synergies and tradeoffs among Sustainable Development Goals across boundaries in a metacoupled world” was written by Meng Cai, Fang Wang,  Julie Winkler, Thomas Connor, Min Gon Chung, Jindong Zhang, Hongbo Yang, Zhenci Xu and Ying Tang, who all are, or recently have been, affiliated with MSU, and Zhiyun Ouyang, and Hemin Zhang in China.

The work is funded by the National Science Foundation; MSU AgBioResearch; and the State Key Laboratory of Urban and Regional Ecology, Research Center for Eco-Environmental Sciences, Chinese Academy of Sciences.

Farms, tables and revealing vast impacts between and beyond