Summary of the soybean yield gaps in Michigan and some management practices that are likely to be responsible for them.

Producers were also asked to provide the location for each field. The field location information was used solely to identify regions having similar soil and climatic conditions and group the surveyed fields within the identified regions. The four factors used to identify the regions have a significant effect on soybean yield potential and are listed below:

The surveyed fields from Michigan were grouped into two regions (1R, green, and 4R, yellow) based on these factors as shown in Figure 1. The R and I following the number indicate rain-fed and irrigated regions.

Soybean yield gap is defined as the difference between the yield potential for a given region and the yield reported by producers from that region. The yield potential for each region was estimated using actual daily weather data collected from two to three weather stations located near the highest concentration of surveyed fields. The average yield gap for both years in each region is presented at the top of the bars in Figure 2. The top of the colored portion of each bar in the figure represents the actual reported yields and the top of each bar is the yield potential.

The bad news is that the yield gaps for the two regions in Michigan rank the highest of all 10 regions. The good news is we have more opportunity to produce higher yields through management. 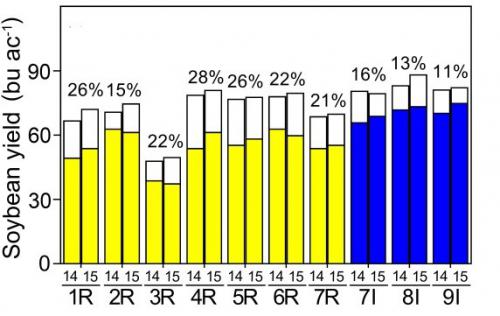 The management practices implemented by the two groups were compared and statistically analyzed. Five practices (planting date, tillage, foliar fungicide and insecticide, drainage system and soybean maturity group) were identified as having a 90 percent probability of explaining the yield gap in half or more of the 10 regions.

Planting date was the main management practice identified for explaining the yield gap in both regions in Michigan. For region 1R, yields decreased by 0.5 of a bushel per acre for each day that planting was delayed after May 1. In region 4R, yield losses of 0.4 of a bushel per acre per day were found. These values are consistent with the results obtained from replicated planting date trials conducted in Wisconsin and Michigan.

This summary of the 2014 and 2015 soybean benchmarking and yield gap producer surveys indicates the soybean yield gap for Michigan producers is between 26 and 28 percent. This is among the highest for the 10 identified regions in the north central U.S. The summary also identifies key management practices responsible for the yield gap, which can be implemented to increase soybean yields in the future. We will ask producers to complete and submit surveys again for 2017.

The information presented in this article, summarized by Mike Staton, was extracted from two, more comprehensive and detailed publications listed below:

Soybean producers should be patient yet prudent about the wet weather