Swede midge, an invasive pest of cole crops, has been discovered in Michigan, presenting a new management challenge where present.

Native to Europe and southwestern Asia, swede midge, Contarinia nasturtii (Kieffer) Diptera: Cecidomyiidae, was identified in North America in 2000, when it was first discovered in Ontario, Canada. The first U.S. detection was in Niagara County, New York, in 2004. Since then it has spread to at least seven states and six Canadian provinces.

The swede midge is about 2 millimeters in length, with hairy wings and a light brown or orange body. They have three to five generations from May to October, with each generation taking 21-44 days to develop depending on temperature. They emerge from overwintering pupae in May, and fly for one to five days looking for mates and host plants. Once mated, the female targets the youngest growing tissue and lays up to a total of 100 eggs in clutch sizes of two to 50 eggs. Young larvae hatch within three to five days, grow up to 3-4 millimeters long and range from transparent to yellow in color. They communally feed for two to three weeks, before “jumping” from the plant to pupate in the soil for two weeks. Swede midge pupate in the top 0.75 inches of soil, but if buried below 2 inches, their pupae can persist for two years and can emerge if tillage brings them back to a favorable depth. 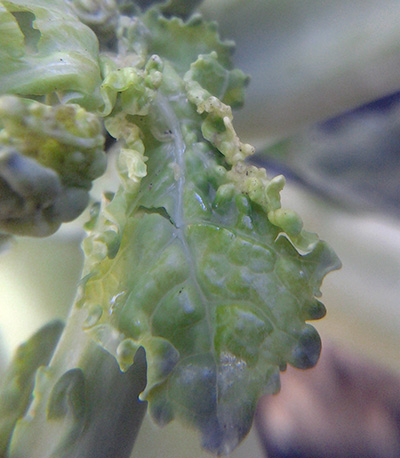 Larvae feed on leaf bases and flower buds emerging from the growing tip of the plant by secreting digestive fluids that break down the waxy plant cuticle. This results in twisting, curling, crinkling and drawstring damage to leaves, and swollen leaf stems where they meet the main stalk.

In addition to these leaf symptoms, heading cole crops can grow “blind” if feeding occurs before button stage, leaving only a brown scar in place of the head or stalk, sometimes creating a multi-stemmed plant. The rapidly expanding new tissue in broccoli and cauliflower florets is another egg-laying target, and can lead to misshapen, partially-filled heads, with brown scarring throughout. 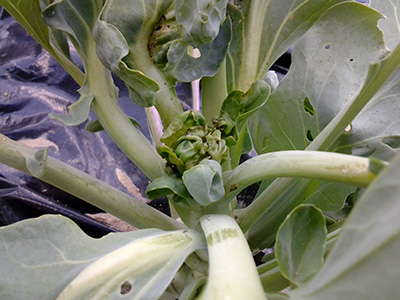 The swede midge belongs to a family of flies known as gall midges. These flies lay eggs in plant tissue, causing the plant to surround eggs with a small, tumor-like swelling. There are many species of native midges that specialize on different host plants. It is difficult to tell them apart, and a trained professional is required to accurately identify swede midge adults captured in sticky traps or reared from soil samples.

Swede midge damage to leaves can look similar to hormonal herbicide exposure, whiptail from molybdenum deficiency or cupping from boron deficiency. The blindness, irregular heads and scarring in heading cole crops can be mistaken for boron deficiency, mechanical damage during transplanting or stress from irregular moisture or temperature conditions as seedlings. 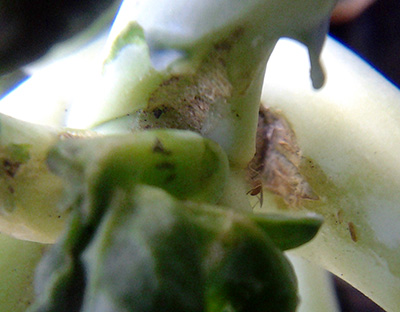 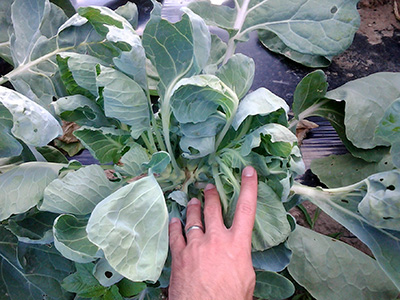 Economic damage to heading cole crops becomes noticeable well after the larvae have left the plant. Using pheromone traps starting in May through October can determine if swede midge males are present. A study in Ontario determined that using traps to time sprays was economically beneficial in cabbage with an action threshold of five males per trap per day, and a minimum of a seven-day spray interval. However, the traps can also attract other gall midges and identification is difficult. Closely examining leaf bases, flower buds and growing points of poorly-performing brassica plants for small yellow maggots can help determine if swede midge larvae are present. Actively feeding larvae create a soupy wet area that can sometimes look like rot.

Adult midges are weak fliers, so scouting fields in low and sheltered areas is also important since that is where they will be most prevalent. Planting in open fields with better crosswinds can help deter adults from establishing.

Unchecked populations will increase dramatically on host crops. Crop rotation is an important control measure due to their rapid, overlapping generations and persistent soil-dwelling pupal stage. Emergence from overwintering pupa occurs even if brassica crops and weeds are absent, so rotating to a non-host crop for at least two years and maintaining good weed control is an effective tool for population drawdown.

Growers must also take advantage of the limited one-to-five-day adult lifespan and weak flight capacity by putting distance between their rotations. Limited information is available, but a minimum of 600 feet is recommended in Europe. Larger distances are better.

Sequential plantings can build populations to high levels throughout the summer, especially if each harvested section of the field is left standing. Killing or removing plants immediately following harvest will prevent side-shoots that serve as egglaying sites. Transitioning to spring-plantings only or spacing sequential plantings far apart in distance and in time is a tool for management when populations become strong.

The University of Guelph in Ontario conducted variety trials in 2001-2003 comparing cultivars of broccoli, cabbage, cauliflower and Brussels sprouts for their susceptibility to swede midge. They found broccoli to be most susceptible. Of the broccoli evaluated, ‘Paragon’, ‘Eureka’ and ‘Packman’ had the highest damage ratings in the three-year study, while ‘Triathlon’, ‘Regal’ and ‘Everest’ showed lower susceptibility and slower symptom development in at least one of three years. In all three years, there was no difference in susceptibility in red and green cabbages, nor between white, red or burgundy cauliflower cultivars, and ‘Jade Cross’ Brussels sprouts showed low susceptibility to swede midge.

Swede midge must be treated with preventative sprays. Trapping is an effective tool to determine when the population is emerging from the soil. When pressure is heavy in heading cole crops, seven-to-nine-day spray rotations are important.

Systemic neonicotinoids are a useful tool for controlling this pest. In a New York greenhouse study, foliar applications of Assail 30SG (acetamiprid) controlled larvae on cauliflower transplants using nine-day spray intervals. Field settings are more of a challenge because swede midge tends to hide from foliar contact insecticides under leaves near the growing tip. In New York field trials, clothianidin and thiamethoxam seed treatments offered 100 percent control of larvae for three to five weeks, and soil drenches of acetamiprid, imidacloprid and thiamethoxam were 100 percent effective for up to seven weeks to control the feeding larvae.

These early season treatments can reduce the number of foliar applications required, but a field study between the University of Guelph and Cornell University indicated that supplemental foliar insecticides are especially important for mid- and later-season control of swede midge in field settings. Most pyrethroid, carbamate and organophosphate insecticides were deadly to swede midge, including λ-cyhalothrin, permethrin, acetamiprid, chlorpyrifos and dimethoate. Bt (Bacillus thuringiensis subsp. israeliensis) caused 50 percent mortality of larvae in the lab setting, but no OMRI-approved materials have been found effective in the field. These insecticides alone were not effective in knocking back populations. In order to effectively manage this pest, lengthy and spaced rotations as well as host weed control are essential to drawdown the population.

There are a number of biocontrols that have been laboratory tested, including lady beetles, and four species of entomopathogenic nematodes were tested. The lady beetle, Harmonia axyridis, fed on larvae in a lab setting when larvae were exposed, but could not squeeze between the leaves where larvae were hiding. The Heterorhabditis bacteriophora nematode was the only nematode that provided control, and resulted in 90-100 percent mortality of swede midge larvae in most soil types.

Michigan State University Extension will be working to determine the extent of the infestation in Michigan, developing monitoring and control recommendations, and educating growers. Swede midge will be a topic at the Great Lakes Fruit, Vegetable and Farm Market Expo in Grand Rapids, Michigan, on Dec. 8-10, 2015. Crucifer crop growers are strongly encouraged to attend.