The heat is on: Protect golf course turf during high temperatures

High temperatures will stress turfgrass in the next week. Here are simple reminders as the heat ramps up.

With temperatures forecast into the 90s and heat indexes into the 100s, this weekend (June 30-31, 2018) is going to leave not only us but turfgrass feeling oppressed. Michigan State University Extension offers some simple reminders as the heat ramps up this weekend.

This may seem obvious, but it might not be a bad idea to go out and actually observe the irrigation system operating in critical areas. Any inefficiencies, misaligned or malfunctioning heads that may have been disguised by cooler temperatures or rainfall to this point will not be in next week. Areas that reveal poor irrigation coverage first are typically edges of fairways, banks of greens, tees, bunkers and the rough. Many of these areas are also high traffic areas that are subject to compaction—another stress.

In an effort to compensate for poor irrigation coverage and improve water management, hand watering is commonplace on golf courses. In Michigan, we are accustomed to syringing greens during periods of drought, but usually not fairways.

MSU Department of Plant, Soil and Microbial Sciences professor Joe Vargas has reminded me that in Mediterranean climates like southern Europe, where it does not rain from the middle of May until the middle of September and the temperatures are in the 90s every day, the superintendent will usually have three or more people assigned every day to syringe fairways. When we have similar conditions, it may become necessary to syringe fairways. We’re not necessarily talking about the hose crew, but rather a short irrigation cycle.

It is commonly perceived that noon is the warmest part of the day, when in reality it is often around 4 to 6 p.m. Syringing late in the afternoon might make the difference this year between healthy and heat-stressed turf.

Heat tracks will be an issue on home lawns and golf courses. Anytime you put traffic from a cart, mower or spreader on turf that is nearing the wilting point or has already wilted, you will likely see a track in the following days or week. If possible, avoid mowing during the heat of the afternoon.

Wetting agents are critical tools in the arsenal for alleviating localized dry spot. However, even with wetting agents, hand-watering may be necessary if it stays hot and dry. 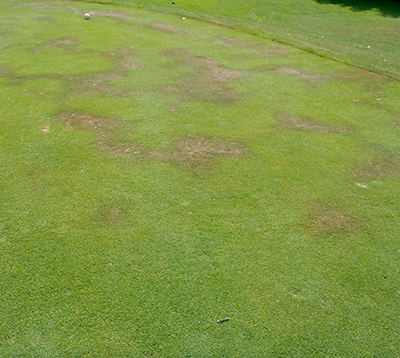 Scout and plan for diseases

Pythium blight is not normally treated for on a regular basis in Michigan, but when daytime high temperatures are in the 90s and night temperatures above 70 degrees Fahrenheit following a rain, chances are optimal for a Pythium blight outbreak. If caught in time, the turf should recover from the dollar spot, brown patch and Pythium blight, which are primarily foliar diseases.

The products of choice should be the DMI fungicides and they should be watered into the top inch of the turf where the elongated crown of the turfgrass plant is located. If you can keep the crown of the plant healthy, the plant will survive no matter how many roots become infected.

Just a reminder to keep yourself hydrated during the hot weather. There are bound to be some long days and if you’re acclimated to cooler weather, temperatures in the 90s may cause us to wilt as much as the turf.

What lies beneath: Ice?