County Government in Michigan acts differently than other organizations because it is built differently; delve into an exploration of its first few layers.

There are several functional elements, or layers, to the county structure. In part one of this Michigan State University Extension article series, we talked about the desire for quick and efficient government, and why that may not always be the best approach. In this article, and the next two, we’ll describe each layer of county government and how it works, and then talk in more detail about the advantages and challenges associated with the mix. We’ll start with elections, or ownership.

Citizens are the government in the United States. We own it, we elect people to lead it, and it exists for us. Abe Lincoln said it more eloquently in 1863 in Gettysburg, Penn., when he challenged us to resolve, “…That this nation, under God, shall have a new birth of freedom – and that government of the people, by the people, and for the people, shall not perish from the earth.” Citizens are at the top of each of the figures below, responsible not only for electing individuals to carry out their business and represent them, but to do so knowledgeably, to understand the issues and the candidates well enough to select people who will approach the task as stewards, to manage the business of government for the long-term benefit of the citizens and not for themselves.

Figure 1 illustrates the electoral role in Michigan county government. The citizens elect the board of commissioners, the clerk, register of deeds, treasurer, sheriff, prosecutor and judges. In some counties, they also elect an executive, and occasionally, they also vote directly on adoption of ordinances. 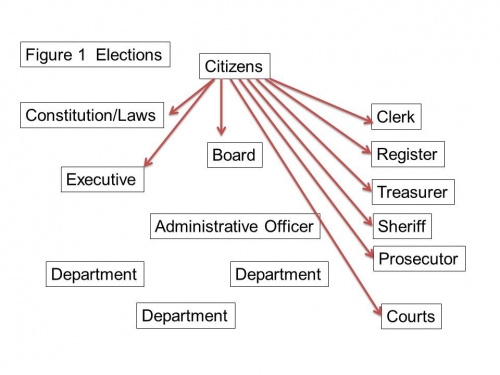 County government is a creation of state government. The state constitution defines the functions and authority of various county officials. It also gives the state legislature and governor authority to further define the roles and responsibilities of county government, including not only elected officials, but also giving direction to many appointed, or hired, employees.

Figure 2 shows that almost everyone who is a part of county government is responsible to uphold and carry out the direction given in the constitution and state laws. You will occasionally hear someone speak of state statutes. This is a specific name for laws adopted by the state legislature. In figure 2, you will also notice that the arrows between citizens and laws, and between the board of commissioners and laws go in both directions, because each group has opportunities to make or influence the making of new laws. 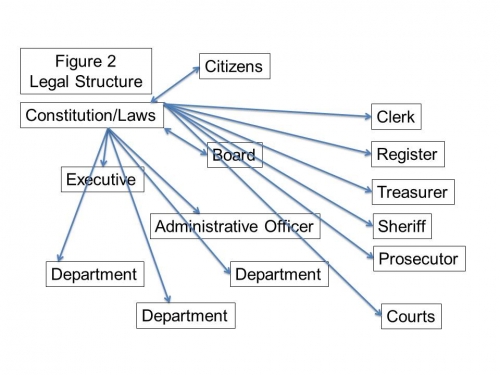 In part three of this article series, we’ll examine the rest of the layers of county government. In part four, we’ll summarize the advantages of complexity in government.

If you have additional questions about local government, use the Michigan State University Extension “Find an Expert” link on this page to contact a local government expert in your area.