County Government in Michigan acts differently than other organizations because it is built differently; delve into an exploration of its organizational layers.

There are several functional elements, or layers, to the county structure; in part one and part two, we introduced the unusual structure of county government and began studying its layers. In this third installment, we’ll continue that examination, concluding in part four with a look at the advantages of its complexity.

Supervision in county government is shown in Figure 3. This diagram is more like what we expect in a corporate organization chart than any of the others, with employees in departments led by appointed managers, working for the department manager, who reports to either the administrator, and ultimately the board or the elected executive. However, employees working in departments managed by the elected officials are not shown in the chart. 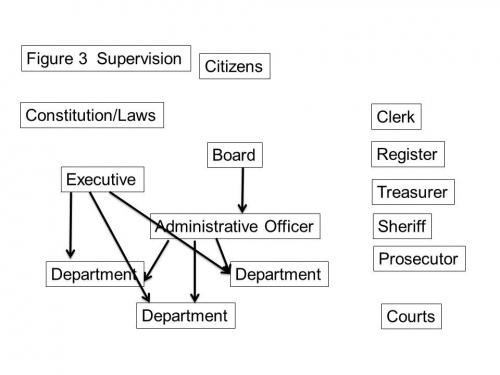 Elected officials, as used here, includes the county clerk, treasurer, sheriff, register of deeds, prosecutor, drain commissioner, surveyor and judges. These employees are supervised by the elected official who serves as the head of their department, but are paid by the county board. We call this co-employer status. Elected officials are empowered by the state constitution to hire and fire their employees, and to set policy for their offices, while the county commission determines number of positions and pay rates. It is then a necessity for both the county commission and the elected officials to work together to negotiate union contracts and to develop overall human resource policies that work well for all departments.

In Michigan county government, the flow of finances also closely resembles a typical corporate structure. Whether by property taxes, intergovernmental transfers or fees for service, revenue comes from the citizens. The county board of commissioners is then responsible for determining spending policy to provide services to satisfy both the requirements of the state, and the demands of citizens. We must remember, though, that counties do not have unlimited “home rule” power, but are limited in service provision to those services either dictated or allowed by the state constitution and statutes. The board plays a large and very important role in determining the appropriate mix of those services, using both their general policymaking power and the budget, which some have called the county board’s most important policy document.

Figure 4 shows the flow of dollars from the board to the various departments. 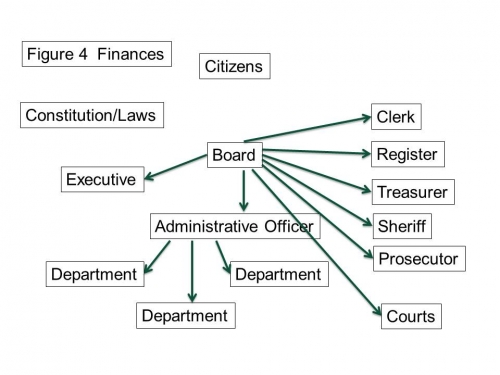 Part four of this series will cover the overall complexity of county government and talk about a couple of advantages of this seemingly crazy structure. The article will be available 12/12/12.

Before settling for a public hearing, consider the continuum of public involvement

Ishpeming plans with eyes on a sustainable future for Bancroft Park