The Village of Ontonagon plans for future sustainability of their harbor community: Part 1

There are more than 80 public harbors and marinas along Michigan’s shoreline. Harbor communities have a unique asset and local economic driver, yet can be sensitive to environmental and economic changes. Over the last several years, fluctuating water levels across the Great Lakes and an economic downturn have impacted the economic vitality of waterfront communities.

The four shoreline communities selected from a competitive application process include New Baltimore (on Lake St. Clair), Au Gres (on Lake Huron), Pentwater (on Lake Michigan), and Ontonagon (on Lake Superior). The communities were involved in a six-month engagement process with the project team to help inform both the development and content of plans for harbor communities to build physical and economic resilience through conventional economic development strategies and placemaking. 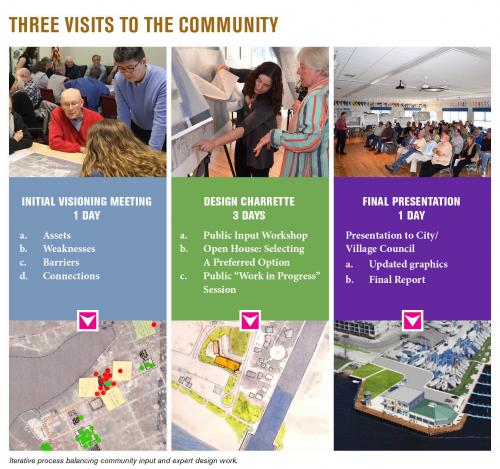 In the summer of 2015, the Village of Ontonagon began its involvement with Sustainable Small Harbor project. After preliminary conversations with local leaders and review of existing local plans, representatives from MSU Extension and Michigan Sea Grant conducted an initial public engagement session in early October to identify key community assets and weaknesses, as well as barriers and desired connections to the waterfront and marina. More than 25 community members participated in this initial meeting. Key assets identified included the marina, Lake Superior, the Ontonagon River, the nearby Porcupine Mountains, and other natural resources. Weakness identified included a poor economy and lack of jobs, limited lodging and retail, and a remote location. Overall, community members desired improved transportation connections between the marina on the west side of the river and the downtown on the east side, as well as better access to the river and Lake Superior.

With the initial community feedback in mind, a larger project team returned to Ontonagon in early November to conduct a three day hands-on workshop called a charrette. A charrette is a multiple-day, collaborative design workshop that harnesses the talents and energies of all interested parties in a community to create and support a feasible plan that represents transformative community change.

To read more about the Ontonagon Sustainable Small Harbor project, read part two in this series. Michigan State University Extension helps communities learn how to improve their social and economic appeal to create and retain jobs. By participating in related MSU Extension programs, community leaders are given the tools they need to have a positive effect on their cities, villages, townships – and the whole state.