Thin azaleas with crusty stems may have azalea bark scale

If your azalea shrub has thinning or dead branches, look for a crusty covering of scale insects on the stems.

Winter-hardy azaleas are promoted as suitable for cold hardiness zones 6 or higher. This means that southeast and southwest Michigan are borderline climates for growing azaleas, and planting anywhere else in Michigan will require excellent winter protection. So in Michigan, when we grow azaleas we are usually focused on finding protected sites and providing winter protection by covering the ground over the roots with mulch and draping protective burlap over the entire plant. However, another threat to azaleas, as well as rhododendron and Pieris or andromedas, is azalea bark scale (Eriococcus azaleae).

If the canopy of your azalea is thinning or yellowing in places or has some dead branches, look for a crusty covering of scale insects on the stems, or white, waxy egg masses produced by the females (see photos). Infested stems and leaves under infested stems may also turn black from the black, sooty mold fungus that grows on the sugary liquid waste excreted by the scale insects. 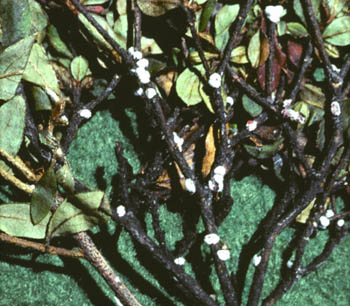 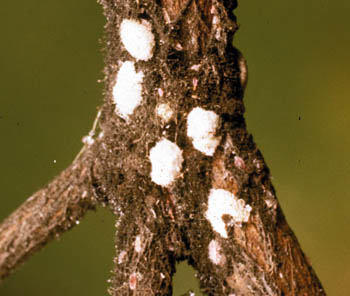 Female insects are approximately 0.125 inches long. Eggs are laid in the spring and hatch from late June through July. Larvae hatching from the eggs are called "crawlers" because they are the most mobile life stage of the scale insect. Crawlers attach to the bark and feed in crevices and branch forks. The scale insects have long, needle-like mouthparts they insert into the plant for sucking plant juices. Immature scales, 0.0625-0.125 (1/16-1/8) inches long, overwinter on the stem, maturing quickly the next spring in late May. Females produce white, waxy egg masses in late June to early July. There is one generation per year in Michigan. 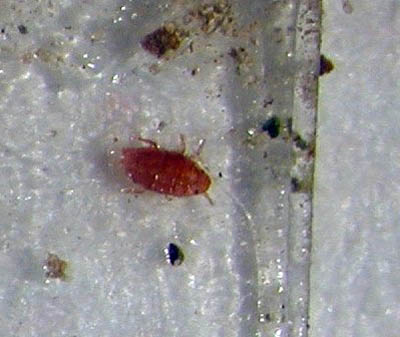 If azalea bark scale is found, Michigan State University Extension recommends spraying infested plants with a 2 percent concentration of a horticultural oil in mid-July. Spray after the azaleas are done blooming to avoid spraying over bees and other pollinators, and to avoid flower injury. Heavy infestations can be sprayed again two weeks later. Later in summer or next spring you can determine if any live scales are present by using a fingernail to scrape off some of the crusty buildup on the stems. If scales are juicy, they are alive. If the crusty residue is dry and flaky, the scales are dead. Dead scales may remain on stems for a year or more. An oil spray applied after the crawlers emerge is usually very effective in controlling azalea bark scale, but keep checking each year and spray again when necessary.

An alternative treatment for azalea bark scale is a basal soil drench with imidacloprid. One product with good directions on the label for applying imidacloprid as a drench is Bayer Tree and Shrub Insect Control. This product is mixed in a bucket of water and poured around the base of the shrub. Several other products are also available that contain imidacloprid. Because imidacloprid is a systemic insecticide that is absorbed through the roots and moves up into the foliage, some insecticide may move into the flowers. Protect bees and other pollinators by waiting until after the shrubs are done blooming before applying the basal soil drench. Research is underway at this time to determine if enough imidacloprid will be present in the following year (one year after a basal drench is made) to be detrimental to bees when the azaleas are blooming.