Timing for fall fertilization and rust on turf

Following a stressful summer, lawns will benefit from a timely fertilizer application in the fall and may help turfgrass out-grow rust infestations.

The stress of this summer resulted in many lawns thinning, some having dead spots, and some probably requiring reestablishment. No matter if your patch of green came through relatively unscathed or left you wondering what happened, now is the time to consider a fertilizer application.

Although many areas of Michigan remain drier than normal, rainfall in the past couple weeks has caused turfgrass growth to resume. For a mid-September fertilizer application, choose a fertilizer that has slow release nitrogen in the analysis such as sulfur coated urea, polymer coated urea, or methylene urea. I would generally avoid applying 100 percent fast release nitrogen fertilizers such as urea at this time of year as they can force too much top-growth that results in more mowing and reduced rooting. Remember, phosphorus restrictions in Michigan limit phosphorus applications in most instances except when a soil test indicates need and also impacts the use of many natural organic fertilizers that contain phosphorus. Read more information on phosphorus fertilizer restrictions in Michigan.

Fertilizing in the fall will result in a moderate top-growth response and give the turf some extra energy to develop roots and fill in the voids. If you’re going to fertilize in the fall, I would go ahead and get the application down so the plant can benefit while the growing conditions are still favorable.

While tying my shoes this morning (September 7), I noticed that my previously white-trimmed sneakers now had the distinctive look of fall with a nice, rustish-orange tinge. Apparently, after traversing around several turf areas yesterday, my shoes found rust even though I didn’t take particular notice. 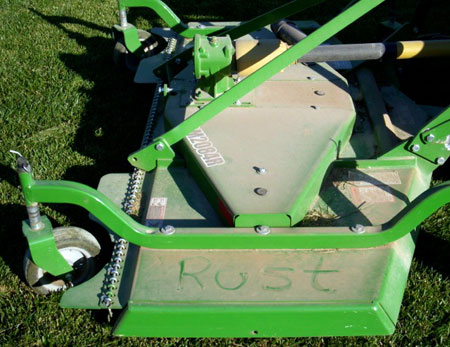 After the heat of the summer, the cool temperatures in autumn often result in rust showing up on lawns. Rust is very diverse; there is stem rust, crown rust, leaf rust and stripe rust. As a general rule in almost all cases, rust is considered a cosmetic turfgrass disease that, although it may discolor the turf, will not result in widespread death of the turfgrass. 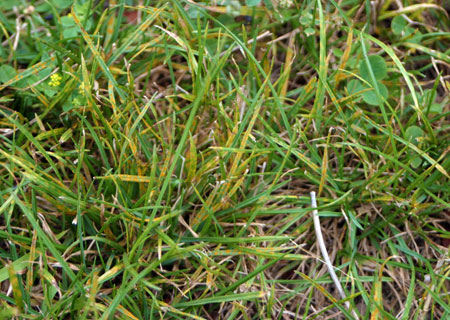 If you find yourself inundated with a bad case of rust make, sure to keep up on your mowing and if you haven’t applied any fertilizer in a while, consider a fertilizer application to stimulate turf growth that will help diminish the impact of the rust. Read more details on rust on turf.