Heavy ice accumulation caused widespread damage, but not all trees were affected the same.

The Dec. 21-22, 2013, ice storm coated trees with an ice coating an inch thick in many locations in mid-Michigan, resulting in widespread tree damage. Exceptional events such as this remarkable ice storm provide numerous opportunities to observe trees and how they were impacted by the event. Here are some notes based on observations of trees around Lansing, Mich., East Lansing, Mich., and the Michigan State University campus. Please note these are general trends and impressions. For nearly every item listed there are certain to be exceptions.

The ice storm was much harder on deciduous trees than conifers. Elms, maples, oaks, locusts and birches were all hard hit by the storm. Conifers, for the most part, came through pretty well. The main exceptions were pines, particularly eastern white pine and Scots pine, which received widespread damage. 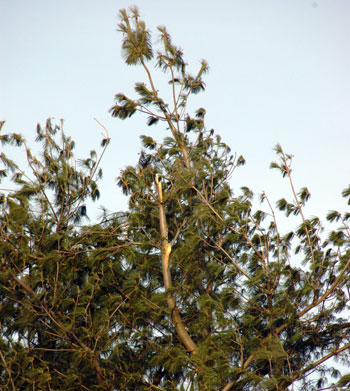 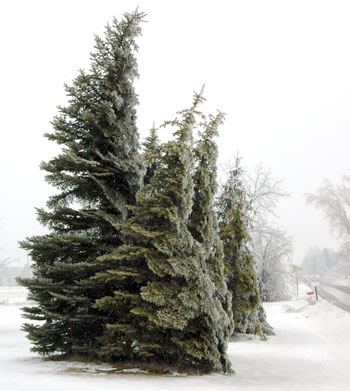 (Left) Pine trees typically suffered more damage than other conifers. (Right) These spruce trees bent
in the direction from which the ice came, but had little damage. Photo credits: Bert Cregg, MSU

Firs and spruces generally fared well. A surprise was that there was comparatively little damage to arborvitae, which often ends up splayed after heavy snow. In the current storm, the ice tended to meld into a solid coating, essentially fusing branches together and reducing splaying of branches. 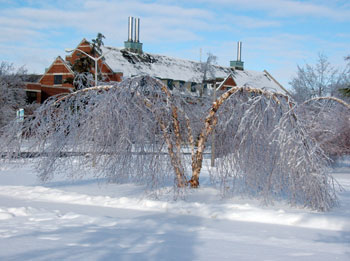 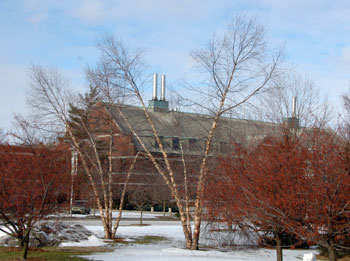 Young trees came out relatively unscathed compared to mature trees. In many cases, young trees were bent over by the ice, but recovered after the thaw. The most common damage that occurred on large trees was high crown breakage. One fortunate aspect of the storm was that there was relatively little wind while the trees were coated with ice. As a result, most of the force on branches was downward and the majority of the breakage was on smaller limbs (3- to 4-inch diameter). Of course there were exceptions to this, but we did not see widespread uprooting of trees or effects of shear forces that usually accompany windstorms.

As one would predict, this one was pretty much a push. Silver maples, which are native to this region, were among the most heavily damaged trees. Likewise, native eastern white pines and oaks were also widely damaged. Among exotics, Siberian elm and Japanese pagoda trees had extensive breakage. 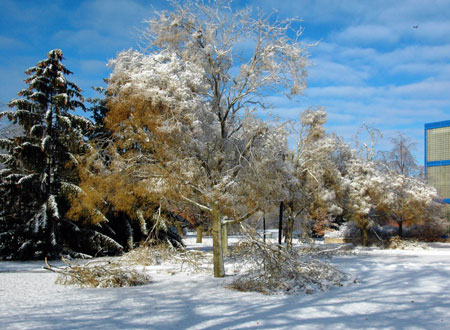 The ice storm did reveal some cases where regular tree maintenance can pay off. On the MSU campus we have dozens of English oaks that have been planted over the years. Unfortunately, they suffer chronic branch mortality due to two-lined chestnut borer. A few weeks before the ice storm, our campus Landscape Services performed some maintenance pruning on these oaks, removing lots of dead wood from each tree. Since the tree crowns had already been cleaned up, there was almost no breakage in these trees during the storm. In addition, removing the limbs with clean pruning cuts instead of breaking them reduces the likelihood of additional disease or insect problems. 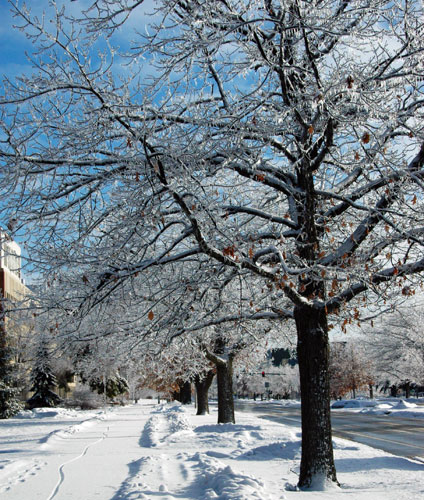 What do you really know about bees?