As Michigan’s climate continues to change, summer drought frequency is expected to increase in length and severity. Added stress to trees and forests will be part of a new environmental dynamic that will likely result in forest change.

Drought affects trees in a variety of ways depending on many conditions. Water stress may kill a tree or, more commonly, predispose it to a wide variety of ailments. Some of these ailments may not become visible for several years.

Root systems draw water from the soil. That water moves throughout the tree to maintain chemical reactions in the living cells. As trees respire, water is expelled and "leaks out" through small pores in the leaves, twigs, branches and trunk.

During dry periods, the larger humidity difference inside and outside the tree causes increased water loss. Higher temperatures accelerate cell metabolism, which requires additional amounts of water. The response to water stress involves closing the many small pores and drawing more water from the soil.

The inability of a tree to maintain an adequate water balance, for whatever set of reasons, is called water stress. A moderate amount of stress may slow growth or cause premature autumn color change. More stress might first result in death of leaf tissue. Browning leaf edges due to water stress is called leaf scorch. Conifers may drop older, less efficient needles. Excessive water stress can kill trees, especially those of certain species and very young trees and regeneration that have less developed root systems. Current-year plantings and transplants will likely suffer high mortality rates.

After a drought breaks, the impacts of drought are not over. More commonly, the weakened condition of trees allows a number of pests and pathogens to more successfully attack tree tissues. Trees whose leaves are eaten by moth larvae or budworms, in combination with a drought, are at higher risk of damage or death. Water stressed pines attract bark beetles, which can kill trees, especially red pine. Mature oaks in sandy soils may die from two-lined chestnut borer attacks over several growing seasons. 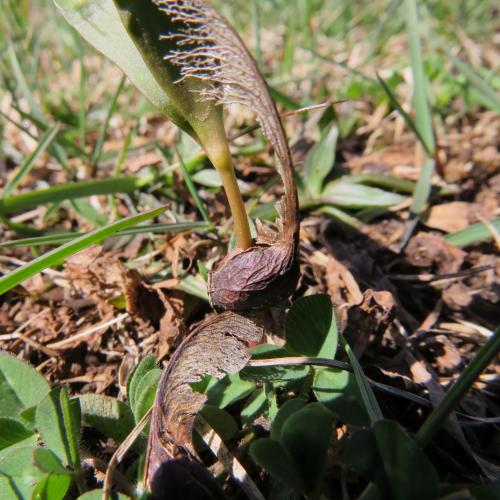 A new sugar maple seedling may not be able to survive warmer and drier soils associated with drought events.

The introduction of fungal pathogens during these weak periods can have a longer lasting impact. For example, an Armillaria fungus might enter water-stressed roots. Over several years, that fungus might grow and eventually kill the tree. On the other hand, with good growing conditions the natural defenses of the tree might defeat the fungus. Some tree species are better at this than others.

Droughts make trees more susceptible to cold winter weather. By adding a light application of phosphorus and potassium fertilizer, a tree will be better "winterized". Be careful to not add nitrogen.

The drought impact on trees can be very localized. Sometimes, a single tree within a group will die. This is common in plantations. Death might be in the year of the drought or it might be a couple years later. Balsam fir commonly displays this behavior.

Soil structure can be highly variable resulting in other local impacts. A tree growing above a large boulder or over a hard pan might die, while its neighbors may recover. Small clay pockets, fissures in bedrock, microtopography and sandy pockets contribute to local variability that can spell survival or death for a water stressed tree.

Counter-intuitively, wetter-than-normal seasons that follow a drought may result in further tree damage. Drought-stressed trees grow roots further down into the soil, where rising water tables may drown them. Trees responding with more root development nearer the surface may get “burned” if the next growing season is droughty. Many tamaracks and other shallow-rooted tree species have died because of this extreme wet-dry cycle.

Competition for scarce soil water becomes intense during dry periods. Most trees simply cannot out-compete grasses and herbs for water. We normally think of competition for light, but the underground battle for water and nutrients can be more important to the long-term survival of trees.

Any time drought is combined with other health issues, trees are at higher risk of damage and death. Drought can tip the scales for trees simultaneously facing an insect attack, a disease or damage from home construction, laid cable, paving, lawn mowing, etc. Conversely, trees weakened by drought may fall victim to opportunistic insects and diseases several years ahead.

According to Michigan State University Extension, drought impacts are usually longer-term affairs, in addition to current year effects. Doubtless, we will see the complex effects of the drought in the decades to come.

Check out the Forest Technology Program!