This summer has taken its toll on turfgrass throughout Michigan. Although the entire state had plenty of hot weather this summer, the precipitation patterns were diverse. Some areas of the state had plenty of rain, while others were parched. In August, the southern half of the Lower Peninsula had lower than average rainfall amounts. From Grand Rapids to Lansing to Detroit, rainfall was anywhere from two to three inches below normal for the month. Rainfall in the northern half of the Lower Peninsula in locations such as Traverse City and Gaylord were more normal. We’ve received some rainfall in September, but areas that are trying to catch up from a sizeable deficit in rainfall from August may be slow to recover.

Compounding the challenges of the turf recovering from a tough growing summer, grubs are now feeding on whatever roots are left. If you have grubs feeding now, products that contain carbaryl (Sevin) or trichlorfon (Dylox) will kill the grubs that are feeding. Make sure to irrigate following application with at least 0.5 inch of water to ensure the product is washed through the thatch layer to the soil where the grubs are feeding. Typically, the grubs will be dead within 10-14 days. If you’re looking to reseed some areas, make sure the grubs are dead before seeding or else you’ll be giving them another good food source. For a complete review of home lawn grub control products, visit Terry Davis’ article at: www.turf.msu.edu/home-lawn-grub-control-products.

Have you noticed more than a normal amount of moths flying around the lawn this summer? I’ve had several reports from around the state about sod webworm moths flying around turf. From my own experience, you may notice it a little when walking around on the turf, but once you start mowing the aerial circus begins. When mowing my own lawn, I’ve seen quite the display of swallows circling, diving and feasting on the moths as they are kicked up by mowing activity. The sound of the tractor starting seems to be able to call swallows from miles away for a free buffet. The moths aren’t actually the ones doing the damages; it’s the larvae from the eggs they lay. The damage looks much like heat or drought stress. The turf is thinned and just doesn’t seem to recover quickly despite the cooler temperatures and rainfall. Fall fertilization should help the remaining turf plants recover and fill the voids, but some spot reseeding may be necessary. For more information on sod webworm, see Dr. Smitley and Terry Davis’ article at: www.turf.msu.edu/sod-webworm. 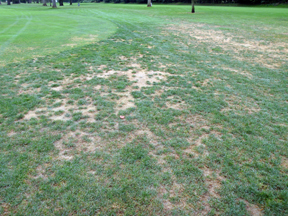 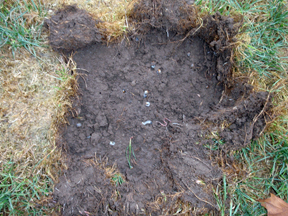