Two easy tips for avoiding grub damage in your yard

July is the best time to treat for European chafer grubs in home lawns, or you can avoid this problem by irrigating more and raising the mowing height.

European chafer beetles have started to fly in Lansing, Mich. Look for the 0.5 inch-long, light brown beetles at dusk. They will be laying eggs the next two weeks. Eggs will hatch in July and small grubs will begin feeding on turf roots in August, growing to a length of nearly 1 inch by the end of September.

Most of the grub damage to home lawns in Michigan is caused by European chafers. According to Michigan State University Extension, it has now spread northward from southern Michigan to Saginaw, Midland and Muskegon, many locations in the northern Lower Peninsula, and a few locations in the Upper Peninsula. Daily irrigated turf is rarely injured by European chafers, but home lawns, golf course roughs, roadsides or any low maintenance site is susceptible.

Recent research has shown that turf with a large root system is much more tolerant of grub feeding than turf with a small root system. Take a look at the accompanying figure from James Beard’s book, “Turfgrass Science and Culture. 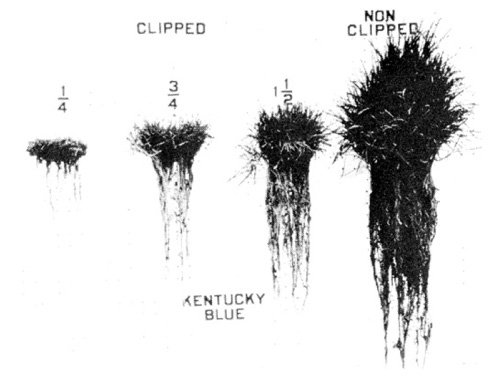 Notice how much larger the mass of turf roots is for the non-clipped turf compared with turf mowed at 1.5 inches. If homeowners raise the mowing height to the highest setting on their lawnmower (usually at about 3.5 inches) and irrigate during dry periods, they are not likely to see grub damage. It may take a year or two of doing this to establish a dense root system.

Meanwhile, for those that suffered grub damage in the past and don’t want to have more problems this fall or next spring, now (in the month of July) is the best time to apply an insecticide for grubs. Choose a product for grubs that contains imidacloprid, chlorantraniliprole, thiamethoxam or halofenazide. For a complete list of effective grub control products for homeowners, including active ingredients, go to the MSU Turfgrass Science website and look at the grub control bulletin by Terry Davis. Chlorantraniliprole (Grub-Ex or Acelepryn) should be applied before July 1.