Although large and fearsome in appearance, cicada killers are pretty much mild mannered and need not be killed.

I will readily admit to enjoying people’s explanations of their first encounters with certain insects. Exceptionally large insects and exceptionally large numbers of insects often invoke rather imaginative reasoning as to the origin or cause of the phenomenon. Case in point: Cicada killers. Cicada killers are very large wasps that show up about this time every year. Several people have called recently to report them as Japanese hornets, African bees, some kind of mutant, or simply the biggest %$@&!# bee they’ve ever seen. Most are quite surprised to learn that cicada killers are a native species and often respond with, “I have lived here for _____ (fill in the number) years and have never seen anything like them before. Are you sure they’re native?” Yes, ma’am, quite sure. 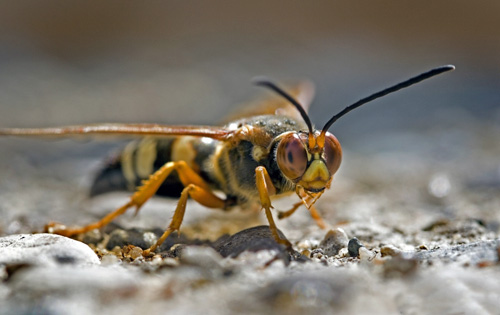 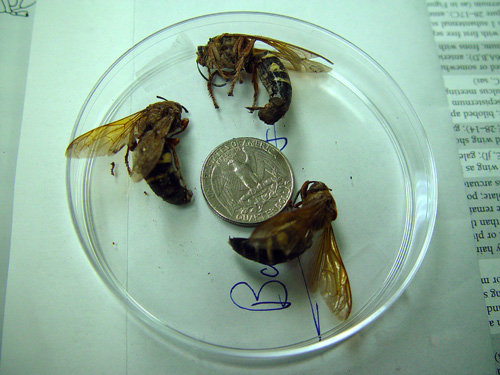 These spectacular insects are known scientifically as Sphecius speciosus (Hymenoptera: Sphecidae). They are the largest wasp that occurs in Michigan. They occur in all states east of the Rocky Mountains and prefer to dig their burrows in sandy, bare, well-drained soil exposed to full sunlight. The wasps feed on flower nectar while the immature or larval stages feed on cicadas that are provided to them by the female wasp. Like other solitary wasps with no large colony to defend, cicada killers usually ignore people as they go about their business of digging holes and hunting for cicadas. A mound of fine soil surrounds the burrow of each female cicada killer. Since colonies of burrows are common, infested lawns usually contain several mounds that can smother the grass. However, they prefer to nest in areas of sparse vegetation, and rarely infest thick, vigorous turf.

Cicada killers overwinter as larvae in the soil. Pupation occurs in the spring and the adults emerge in mid-June to early July. Emergence continues throughout the summer. Females feed, mate and dig burrows for several weeks before hunting for cicadas in nearby trees. Excess soil thrown out of the burrow forms a regular, U-shaped mound at the entrance.

The females search tree trunks and lower limbs for cicadas. The wasp stings its prey, turns the victim on its back, straddles it, and drags it or glides with it to the burrow. Each burrow includes several cells where larvae are raised. Each cell is furnished with at least one cicada (sometimes two or three) and a single egg before being sealed off. Female eggs are provisioned with two or three cicadas, while males only get one. As a result, male cicada killers are much smaller than the females. Males establish territories near nesting females and aggressively defend their territory from other intruding males. 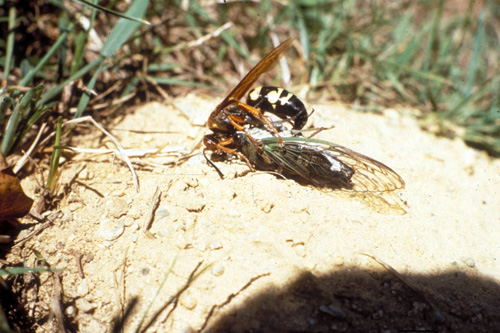 The eggs hatch in two to three days. Depending on the number of cicadas in its cell, the larva feeds for 4 to 10 days until only the cicada's outer shell remains. During the fall, the larva spins a silken case, shrinks, and prepares to overwinter. Only one generation occurs each year.

Despite their large size and impressive stinger, cicada killers do not readily sting and one can stand amongst their burrows and watch them work without fear of being stung as long as one remains considerate and respectful, i.e., don’t try and catch one with their hands. Most people I talk to, however, seem reluctant to get that close and would rather kill them off. Cultural practices can prevent or eliminate the establishment of cicada killer colonies. Adequate lime and fertilizer applications accompanied by frequent watering to promote a thick growth of turf can usually eliminate a cicada killer infestation in one or two seasons.

Read more than you will ever care to know about cicada killers at Lafayette College’s Biology of cicada killer wasps website.

Mowing turf through the rain

What can I do about the mosquito super emergence?