United States is the world’s leading producer of petroleum

The United States has been ramping up exploration and production of oil since 2009 and has now surpassed Russia and Saudi Arabi as the world’s largest producer of crude oil. In May 2014, the United States produced 13,535 barrels per day, outpacing Saudi Arabia by more than 1,900 barrels per day. The top five oil producing countries in May 2014 are shown in the table below. 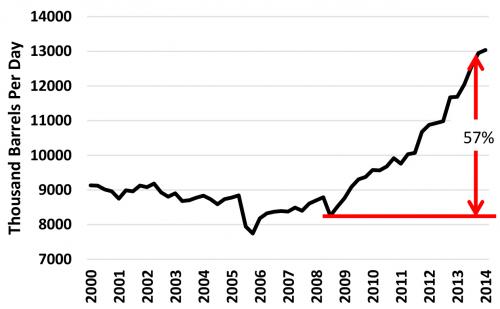 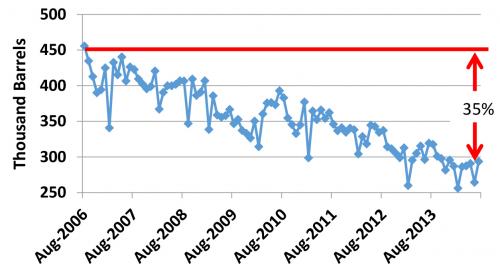 United States production of ethanol, an alternative renewable fuel and oxygenate for gasoline, has also ramped up dramatically over the past decade. This is mostly due to the development of the Renewable Fuels Standard which requires fuel companies to blend renewable fuels in the supply stream. The majority of U.S. ethanol is produced from corn grain. Today, ethanol accounts for about 10 percent of fuel consumption by gasoline engines. Figure 3 shows historical production of ethanol in the United States.

Given recent geo-political unrest in the Middle East, consumers might wonder why gasoline prices have not soared as they did in 2004-2006. With increased domestic production of crude oil and ethanol, we have been able to reduce our reliance on foreign oil. In addition, Americans are driving fewer miles in more fuel efficient vehicles. The combination of production and policies in the United States are having a positive impact on fuel prices.

Should I remove corn stover this fall?

Corn stover: What is its worth?

Corn is again a low cost feedstock for biofuel