Use of Apogee for shoot blight control in 2012

Although the risk of blossom blight has been low in 2012 due to cool conditions, temperatures will eventually warm and the risk of shoot blight will rise. Apogee is the best material currently available for shoot blight control.

As the insane year of 2012 continues, one positive aspect in terms of disease has been the relatively cool, recent conditions during apple bloom. Temperatures in the 50s are not conducive to fire blight. The bacterium needs warmer temperatures to grow and build up large populations on apple stigmas prior to infection of flowers. Thus, MaryBlyt EIP values (available on Enviro-weather) have been low to zero for the last few weeks.

However, even trees and orchards not showing blossom blight symptoms can still suffer significant shoot blight infection. We saw this situation as recently as 2010. There is still fire blight inoculum around, temperatures will eventually rise, and actively-growing shoots will be present and at risk of infection. On highly-susceptible cultivars (Gala, Jonathan, etc.), shoot infection rapidly results in bacterial ooze production and further pathogen spread even before the symptoms are readily present (Photo 1). Furthermore, on younger trees (about less than 8 years old) on fire blight-susceptible rootstocks, the pathogen can quickly move systemically downward through the tree and cause rootstock blight, killing the tree. 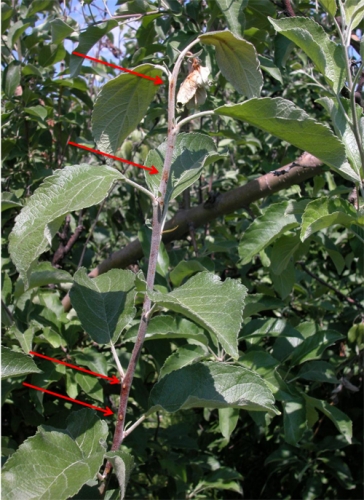 Apogee is a growth inhibitor that provides excellent control of shoot blight. The first timing for an Apogee spray is at king bloom petal fall. This timing coincides with the beginning period of rapid shoot growth of the tree. The “Apogee effect” takes about 10-14 days to become established. See my accompanying article, “The ‘Apogee effect’ – examination of the mode of action prohexadione calcium in shoot blight control,” discussing our research on determining the mechanism of action of Apogee.

Most growers prefer to space Apogee applications out using two, three, or four applications (once every two weeks) to take advantage of disease control as well as horticultural benefits of Apogee use. This strategy is effective for shoot growth control and fire blight management under low and moderate disease pressure. See the “2012 Michigan Fruit Management Guide” (pgs. 94 and 229) for more specific information on Apogee use rates.

Currently, 2012 is shaping up as a year of low to moderate disease pressure for fire blight. However, without Apogee use, early shoot infections can lead to significant fire blight infection and risk for epidemics if fire blight-conducive weather becomes prominent or if trauma situations occur in specific blocks.

Read the Apogee label carefully. Apogee must be used with an organosilicone surfactant, and an equal weight of spray grade ammonium sulfate should be applied. Do not use Apogee on ‘Empire,’ ‘Stayman,’ or ‘Winesap’ because of the potential for fruit cracking.