With one look at MSU’s Enviro-weather, you can learn a lot about the freezing conditions in Michigan. If you know where the weather stations are, it tells you even more.

Michigan State University’s Enviro-weather is a powerful tool for those interested in Michigan weather. I use it a lot in spring and winter to look at freezing temperatures. When you go to the MSU Enviro-weather website, you’ll see a map of Michigan that has all the weather stations marked. Clicking on a station takes you to a page with recent conditions and a list of options. Immediately below the current conditions is a link titled “Overnight temperatures/ hours below freezing.” This generates a table of hourly temperatures for all the weather stations in the region. Temperatures below freezing are highlighted in red.

I can quickly tell a lot about a freeze with a glance at the table. I can see how low the temperatures have been in southwest Michigan and where the low temperatures are. Often, the lowest temperatures occur in the lowest areas in the region where cold air collects during a freeze. If there is cloud cover or the wind blows through the night, there is often very little difference between the stations. I can easily see that by looking at the report.

Enviro-weather stations in southwest Michigan showing height above Lake Michigan and distance from the Lake. 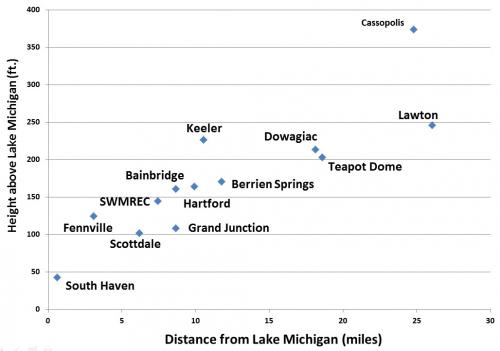 I have a big advantage in that I know where the stations are and the topography of the sites where they sit. Growers who look at the site frequently in the spring quickly get a sense of which sites are the coldest and which sites are warmer. The purpose of this article is to share with growers what I have learned about the locations and topography of the MSU Enviro-weather stations in southwest Michigan.

A surprise to me when I made this graph is that some sites with similar elevations and distances to the Lake often have very different temperatures in a freeze. The difference is the local topography. During a radiation freeze, cold air flows downhill into the low areas, so low areas where cold air accumulates are often the coldest sites in the region. Sites located on high hills or on the slopes of hills usually have good air drainage and are warmer during a freeze. If there is no good air drainage from a site, a dome of cold air can form over the area.

Below is a table of values downloaded from MSU Enviro-weather for the morning of Feb. 20, 2015. At the time, a large dome of dry polar air sat over Michigan. The days were sunny and cold. Snow covered the ground and reflected the sun’s heat back out into space. At night there was no wind and temperatures quickly fell to record cold temperatures around Michigan. Low temperatures around -20 degrees Fahrenheit were common in many areas of southern Michigan.

On the morning of Feb. 20, the coldest temperatures were between 4 and 6 a.m. Generally, sites closer to Lake Michigan, such as South Haven and Scottdale, were warmer. Higher sites, such as Cassopolis, Keeler and Lawton, were warmer also. Several cold sites stand out. The Enviro-weather station at Teapot Dome between Paw Paw and Lawrence is very cold at about -24 F. Another cold site is Grand Junction at -15 F. Other colder sites with lows around -10 F include Bainbridge, Berrien Springs, Dowagiac, Fennville and Hartford. Below is a table of the southwestern Michigan Enviro-weather sites listed from south to north and a short description of the local topography.

It is even easier to imagine the different sites if you look at a graphic of where the different Enviro-weather stations are located (see graphic below). Keeler and SWMREC are on hilltops indicated by the number 1. Teapot Dome, Hartford and Grand Junction are located in broad valleys similar to 2. People sometimes ask why we don’t just have all the weather stations at the tops of the hills. I like having weather stations at both the warmest and coldest sites so I have a good Idea of the range in temperatures. If the temperatures are similar across all sites, I know it was cloudy or breezy in the morning. People often ask me if the Teapot Dome station sits in a hole. It doesn’t; you can see by the graph it is almost the same height as Dowagiac.

Many of the higher elevations in southwest Michigan are broad, flat or rolling along the surface with a steep drop off near the edges. Sites that are located in the interior of these regions are similar to 3. Then there are locations which may be a little above or a little below the general topography and may be located in or above the local air drainage systems, which would be locations similar to location 4.

Seeing how these different sites behave in a freeze tells me a lot about its severity. I often look at pairs of stations that are close together but in different topographic settings. I compare Lawton and Teapot Dome to get an idea of the conditions in eastern Van Buren County. Keeler and Hartford do the same for western Van Buren County. This pair also gives me an idea of northern Berrien County. I also compare SWMREC and Bainbridge for northern Berrien County. These four sites give me a good idea of what is happening in an important fruit growing region.

Cold injury depends on the development of the fruit stage. In the middle of winter, some cold tender fruit crops can handle -10 F with no damage. These same crops would be hurt by temperatures below 20 F in the early spring or below freezing after bloom. In 2012, Michigan had a warm March which triggered plants to start growing. In southwest Michigan, the fruit trees bloomed about a month early and most of the flowers and fruit were killed by relatively normal freezes in April. On April 12, 2012, most of the fruit crops were susceptible to temperatures below freezing and would suffer severe damage if the temperature was 28 F or below. Below is a table of data from MSU Enviroweather for the radiation freeze that morning.

From the table you can see that only the high Keeler site stayed above freezing all morning. Several other sites, such as SWMREC, Cassopolis, Fennville, Lawton, Grand Junction and South Haven, did not go below 28 F. Most of these sites are at local high points. Other sites suffered damage as the temperatures dropped into the mid- to lower 20s. South Haven is low, but located so close to Lake Michigan that the cold air moved out over the Lake.

Grand Junction is a special case. The Grand Junction Enviro-weather site is located near a blueberry field with an overhead sprinkler system. This system is used during and after blueberry bloom to protect the crop from freezing temperatures. Running sprinklers during a freeze makes ice, and as long as the ice is wet the temperature will stay close to freezing. I often check the leaf wetness sensor at that site if I think they are running their sprinklers. If it is wet, I know the sprinklers are running. If the sprinklers are running, I know it affects the station nearby.

I often get calls on frosty mornings asking if the fruit was damaged and how bad is the damage. By looking at the morning lows, knowing where different fruit plantings are located and what temperatures can damage the fruit, I have a pretty good idea of where to go and what to look for when I scout for freeze injury. And now you can too.