Horticultural oils have been used on a wide variety of landscape plants for suppression of many insects and mites. Oils are desirable to use because they are safe for people, pets and most non-target organisms. Although safe to animals, horticultural oils may damage some plants, so landscapers and arborists should only use highly refined oil products and know what rates to use and which plants are sensitive. I can summarize what you need to know about oils under three categories: insects susceptible to oil, when and how to spray oil, and sensitive landscape plants.

Horticultural oils work as a contact insecticide and have very little residual activity. This is good for beneficial insects, but it means that your oil spray only works on the day you apply it. Still, horticultural oils may be very useful, especially when trying to preserve natural enemies, or when a very safe product is requested. Horticultural oils applied during the growing season have been reported to give control of the following insects:

The insecticide that oils are used for the most are armored scales (pine needle scale, euonymus scale, oystershell scale). Applications of horticultural oils during the dormant season (March to bud-break) are usually made to help suppress scale insects, mites, aphids and psyllids.

How and when to spray horticultural oils.

I suggest using horticultural oils at the summer rate, which is usually listed on the label as a two percent concentration. Although some labels say that you can use a three to four percent concentration during the dormant season, a two percent concentration is best to avoid plant injury. Dormant applications to suppress scale insects, mites and aphids are most effective in April when temperatures are warmer and some insects begin to become biologically active again, even if they aren’t moving. Oils should not be used when the temperature is below freezing. It is also best to avoid horticultural oils during the period of leaf expansion. Once the leaves are fully expanded, horticultural oils can be used at any time during the summer, except on sensitive plants. Avoid spraying oils when the temperature is above 90ºF. The most popular use of horticultural oils is as a crawler spray for pine needle scale (mid-May, lilac bloom), euonymus scale (early to mid-June), oystershell scale (early June) and other armored scales. Horticultural oils work as well as most insecticides for control of armored scales, because they are highly effective against crawlers, and they don’t leave long-lasting residues that kill predators and parasites.

A study on phytotoxicity of horticultural oils to landscape plants was published in the Journal of Arboriculture in 1990 (4): Davidson, Gill and Raupp. They sprayed trees and shrubs with a two percent horticultural oil once per month in May, June, July and August--four applications total. Some 75 types of landscape trees and shrubs were sprayed. The ones found to be sensitive are:

*Others reported to be sensitive in different studies:

Summer oils: Smoketree, Azalea, Japanese holly, Savin junipers, Photinia, Amur maple, blackberry, raspberry, Japanese holly.
For all applications, make sure the spray tank is well agitated because oils can separate from water, which is sure to cause a problem. Finally, avoid spraying horticultural oils after October 1. Several different publications on horticultural oils suggest that fall sprays may cause damage that is not visible until the following spring. 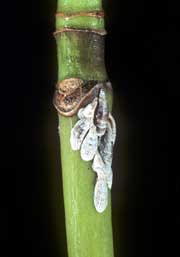