Vegetable pesticide series: Should I use it during bloom?

The wide diversity of vegetable crops means there is a diversity of pollination requirements. In some vegetables, pollination is key to high yields, while in others there is little need for pollination for the marketable part of the crop. Growers producing a mix of vegetables will likely have crops that fall at different points in the gradient of pollination requirements. This is complicated by sequential planting, season extension tools, cover crops and field rotations, all of which can contribute to long bloom periods and multiple critical periods when pollination is needed.

Renting honey bee hives for an entire season to meet the needs of multiple vegetable plantings is common, but can complicate insecticide applications. This complex situation can be simplified by first categorizing the vegetables on your farm by how attractive they are to pollinators, then thinking about the products at hand for managing key pests. Products can be chosen based on their toxicity to bees, their potential synergisms and how they are applied.

Vegetables and their relationship to bees

Vine crops tend to be continually flowering and visited by managed honey bees and wild bees throughout the growing season. Such crops are cucumbers, gourds, melons, pumpkins and squash. Developing fruit and fresh flowers can often be found on the same plant at the same time.

Growers of large-acreage processing vine crops often contract honey bees for specific windows of time to concentrate their fruit set and avoid spraying insecticides within that window. Other multi-crop vegetable growers may rent hives for an entire season for multiple bloom times of many varieties of vine crops. For all growers dealing with these bee-dependent crops, wait until evening when bees are no longer foraging to make sprays.

Type 2: Fruiting vegetables that do not need pollination from bees, but still attract bees.

Some flowering vegetable crops can set fruit without bees, but bees will still visit them. Such crops include tomatoes, peppers, eggplants, okra, beans, peas and sweet corn. The legumes, solanaceous crops and okra may benefit marginally from bee visits, but sweet corn does not benefit from bees even though bees will readily visit to collect its huge amounts of pollen. The flowering period for these crops can vary based on their planting time. If nothing else is available for bees during their bloom, then they will visit these pollen and nectar sources.

Large-acreage growers should not rent honey bees for these crops, but greenhouse tomato and pepper growers will often rely on commercial bumble bees. The packages that these bumble bees come in are designed with insecticide applications in mind, having a door to shut them inside when a spray is required.

Type 3: Stem and root vegetables that do not need pollination from bees, but may still attract bees.

Some vegetable crops flower and produce fruits, but we do not harvest that part of the plant. Such crops are asparagus and potatoes. Asparagus flowers are very attractive to honey bees, and rental colonies are used for seed crops of asparagus. Wild bumble bees have been observed more often in potatoes than honey bees, but potatoes are vegetatively propagated, so they don’t need pollinators for production.

Honey bees are never rented for fresh market production of these crops by themselves, but bees may visit the flowers if they are nearby and nothing else is available. Insecticide applications on all of these crops should be timed when bee visitation is low, in the evenings or on overcast days.

Type 4: Stem, root and leafy vegetables that do not need pollination from bees, and do not usually attract bees.

Some vegetables typically do not produce flowers in the course of a normal year under proper management for fresh market production. Such crops are onion and carrot relatives, lettuces, globe artichoke, red beets, rhubarb, some culinary herbs, hops and all of the rooting, leafy and heading cole crops.

Most of these crops will only flower when under environmental stress or after the main harvest, in which cases insecticides are usually not applied. However, blooms from broccoli side shoots or unharvested lettuce that were treated with systemic insecticides may create a risk to pollinators. Some varieties of rhubarb will send out flower stalks more than others, and it is a common production practice to remove these flower stalks to focus the perennial crop’s energy on the root system.

Hops are wind-pollinated, and plantings are typically all female plants that do not produce nectar or pollen. Male hops plants used for breeding could potentially attract bees for their pollen.

For seed production, onion and carrot family plants, lettuces, globe artichoke and rooting, leafy and heading cole crops require pollination by honey bees and wild bees, and are attractive to them. Red beets are mostly wind pollinated, but will attract bees and benefit only marginally from them for seed production.

The United States Environmental Protection Agency (U.S. EPA) has made guidelines for measuring pesticide toxicity to bees. The most common “Tier I” assessment is the acute toxicity to individual honey bees.

High toxicity: The acute 48-hour contact LD50 is less than or equal to 2 micrograms per bee. This means that it takes 2 micrograms (two-thousandths of a gram) to kill 50 percent of worker bees within 48 hours of being treated with this amount.

Moderate toxicity: The acute 48-hour contact LD50 is less than 11, but greater than 2 micrograms per bee.

Low toxicity: The acute 48-hour contact LD50 is greater than 11 micrograms per bee. 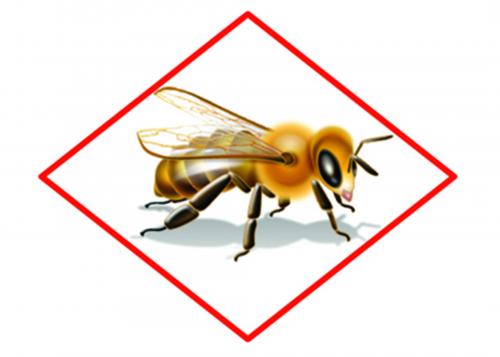 Highly toxic and toxic pesticides under this Tier I test are now required to have text included in the label that describes how to use the product to reduce risk to pollinators. This “Bee Box” seen at right/above can be found in the “Precautionary Statements” section of the label. Not all pesticide labels have been changed to reflect this yet, and manufacturers of some Relatively Nontoxic products have volunteered their own precautionary bee language on the label anyway that may not feature the bee box.

There are flaws with using toxicity alone to judge the risk to bees. All pesticide applicators should know that Risk = Exposure x Toxicity, meaning risk is a combination of two different things. A high exposure to a less toxic pesticide could have the same effect as a low exposure to a highly-toxic pesticide. For bees in the agricultural environment, the exposure part of the equation is not easily quantified. A low toxicity pesticide can still become a serious risk when multiple sublethal exposures are encountered by honey bees, causing a colony to dwindle and die. Solitary bees may be more susceptible to sublethal doses, as they do not have the same detoxification system that is found in honey bees.

Growers can also investigate which insecticides are least toxic to bees while also serving pest management needs. Then, limit exposure by some of the methods listed above to reduce the overall risk to bees. For example, a liquid formulation could be used during bloom periods, as dusts and wettable powders are more likely to be picked up by bees.

One other way to reduce pesticide risks to bees is to be aware that some insecticides are more potent when mixed with certain types of fungicide. Because of this, tank-mixes should be carefully planned during bloom.

Due to the difficulty in testing all interactions with all products, there is limited information on specific product combinations that cause much greater risk (synergism). However, products within a chemical class often behave similarly. Therefore, Mode of Action codes for insecticides from the Insecticide Resistance Action Committee (IRAC) and fungicides from the Fungicide Resistance Action Committee (FRAC) can serve as guides to whether a potential synergism could occur.

In most cases, the synergisms are more likely to occur if products are applied as foliar applied tank mixes. Soil-injection, in-furrow, granular formulation or seed treatments should reduce direct bee exposure if timed properly before bloom periods.

FRAC M5 with IRAC 3A

Chlorothalonil (FRAC M5) fungicides, such as Bravo or Echo, can synergize with a wide range of pyrethroid (IRAC 3A) insecticides such as Asana, Brigade, Hero, Mustang Maxx, Pounce and Up-Cyde.

There is evidence of synergism between Pristine, which is a premix of boscalid (FRAC 7) and pyraclostribin (FRAC 11) fungicides, and chlorpyrifos (IRAC 1B) insecticides, such as Lorsban, Nufos, and other generics. There are other premixed FRAC 7 and FRAC 11 fungicides, such as Elatus (azoxystrobin + benzovindiflupyr), Luna Sensation (fluopyram + trifloxystrobin), Merivon and Priaxor (both are a mix of fluxapyroxad + pyraclostrobin).

Maintaining flowering areas in non-cropped sections of farms can be useful to pull pollinators away from vegetable crops that don’t require pollination or in-field flowering weeds where they may look for nectar and pollen, and where they may come in direct contact with spray residues. For a mixed vegetable farm in Michigan, this type of planting could feature main-season flowers that bloom after June and before September to pull some pollinators away from pesticide contact and provide them with diverse pollen and nectar sources. Drift reduction techniques would be important in this scenario as well to avoid pesticide residues drifting onto the wildflower plantings

In some vegetable systems, cover crops are employed to fill gaps between plantings and may be able to serve to attract and support pollinators. Field peas, vetch, buckwheat, clovers and mustards are sometimes seeded in late spring or early summer. If left to bloom, these broadleaf cover crops can support pollinators in the summer.

Large acreages of pollinator-dependent vine crops would benefit from the opposite strategy, with alternative blooms before and after initial vine crop bloom. Field peas and vetch can be seeded in early spring to provide nitrogen and can be terminated at peak bloom before planting early and mid-summer cucumbers, summer squashes and some winter squashes. Clovers are sometimes inter-seeded in mid-summer to fill row middles with blooms after harvest, and mustards, radishes and buckwheat are fall bloomers when planted in late summer after an early harvested crop.

What commonly used pesticides labeled for vegetable use are risks for pollinators? Below is a list in order by trade name. In short, all of them have some level of risk because Risk = Exposure x Toxicity. We can measure the toxicity of each pesticide, but choosing the route of least exposure is something growers have lots of control over.

The list of chemicals and their rankings are based on the Bee Precaution Pesticide Ratings database, managed by a team lead by Steve Dreistadt of University of California-Davis. Recommended actions are based on the LD50 values and the potential exposure routes of pesticides. Further, data is included on whether the pesticide is known to accumulate in honey bee brood or is toxic to other bees, and The Modes of Action to avoid tank-mixing based on synergistic effects on bees. A dash (-) indicates no data were available.

Always double-check the label that comes with your specific product and formulation.