In the last couple of weeks, strange growths on birch, elm, linden and maple leaves have been observed in southern Michigan. For silver maples, this is a very common occurrence in Michigan. The colorful, felt-like patches are not the result of a fungus, but are caused by the feeding of a tiny creature called an eriophyid mite. This type of mite is less than 1/100 of an inch, cigar-shaped, and though it is related to spiders and spider mites (which have eight legs), the eriophyid mite has only two pairs of legs. Because the tiny mite is hard to observe except under magnification, it is usually identified by the strange growth response it causes on the host plant. 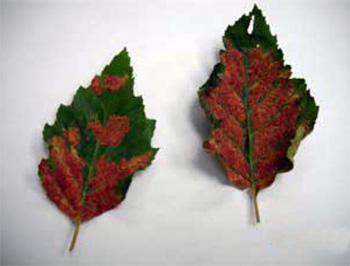 Different species of eriophyid mites create a variety of abnormal growths on leaves and flowers. The velvet eriophyid gall mite creates the reddish-patch called an erinea, which is most commonly found on silver maples.

The adult mite survives the winter on the tree by finding shelter under bark scales and buds. The adults migrate to buds in the spring and begin to feed and lay eggs on the leaves. The mites feed by sucking the cellular content of the leaves. The feeding causes deformed growth on leaves that appear as rounded velvet patches. These growths or galls that form surround the mite, providing protection as it feeds and reproduces. The plants response is an attempt to wall off attack from the mites.

The deformed appearance of the leaves often creates anxiety in homeowners that believe their trees and shrubs are being harmed. The resulting growth that forms is not considered harmful to the tree or shrub’s health. High populations of the eriophyid mite may cause some leaf drop, but most leaves remain on the tree and continue to function. Since there is very little damage to the tree, no pesticide treatments are recommended.