When nearby alfalfa or forage fields are cut, potato leafhoppers will leave the field to look for food plants, including red, Norway and sugar maple trees.

Potato leafhoppers are mostly a rural pest of maple trees in the landscape and in nurseries when alfalfa or forage fields are nearby. When hay is cut, the leafhoppers leave the field to look for food plants, including maple trees (especially red, Norway and sugar), but also birch, apple, crabapple, viburnum and others. Potato leafhopper (Empoasca fabae) adults are pale green, wedge-shaped, around 1/8 inch long and have white eyes. The larvae are usually more yellow-green and do not have wings. Leafhoppers can be found on the underside of foliage. Potato leafhopper larvae move sideways when disturbed.

If potato leafhoppers are a problem, maple trees can be sprayed with Talstar, Tempo, Scimitar or Sevin. Also, Discus can be used in the nursery as a soil systemic insecticide, but allow three weeks for uptake and movement into the leaves. In the urban landscape, trees can be sprayed with a pyrethroid insectide (Talstar, Tempo, Scimitar) or imidacloprid, or other nicotinoid insecticides can be used as basal soil systemic treatment (again, allow three weeks for uptake). Homeowners can purchase Sevin or Multi-Insect Killer as a spray, or Tree and Shrub Insect Control to use a basal soil drench.

Homeowners should be aware that high pH soils (greater than 7.8) may also result in distorted new growth of some red maple trees. 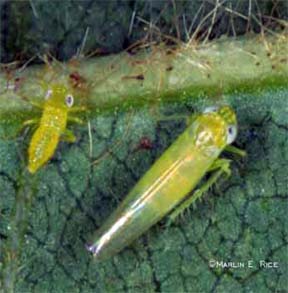 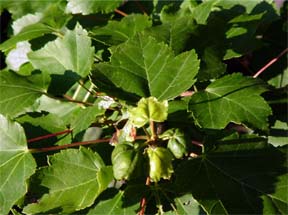 Two more spruce problems that are not herbicide related

Do the chilly temperatures have you wondering just how cold it got last night?