Water use of biomass crops

When evaluating potential biomass crops, it is important to consider the water needs of each crop, how much is available to the crop via precipitation and how well each crop can use the water to produce the most biomass. A study recently published by Great Lakes Bioenergy Research Center (GLBRC), lead authored by Michigan State University professor Steve Hamilton, provides a new perspective on how planting different biomass crop species might impact terrestrial water balances. “Comparative water use by maize, perennial crops, restored prairie and poplar trees in the U.S. Midwest” was published in Environmental Research Letters June 17, 2015.

The GLBRC plots are located at the Kellogg Biological Station in southwest Michigan on well-drained soils developed from glacial outwash. Six different crop systems were established in 2008 to evaluate productivity, profitability and sustainability. Evaluating the water balance of each crop is important as we think about shifting parts of our landscapes to bioenergy crop production. When analyzing water balances, researchers usually partition water to the following categories (Figure 1):

A weather station was used to measure precipitation and temperature. Soil water measurements were made using time domain reflectometry (TDR) sensors placed at multiple depths from the surface to 125 centimeters (50 inches). The TDR data can be used to calculate how much water came into each cropping system’s root zone, and how much left via transpiration and evaporation. Typically, evaporation and transpiration are combined into evapotranspiration (ET) because it is very difficult to partition them out separately.

There were six biofuel species in this study including corn, switchgrass, miscanthus, a five species grass mix, an 18 species restored prairie mix and hybrid poplar. Four years of data are reported, which include a drought year (2012) and three years of near normal rainfall.

The climate and soils of rain-fed systems in the upper Midwest may limit crop productivity based on water availability. Two key questions were answered with this study:

Average ET over the four-year period showed the perennial cropping systems were not much different from the annual crop of corn. Mean growing-season ET increased in the following order: miscanthus < poplar < corn < prairie < switchgrass < native grass (Table 1), although the range of values was only about 4.5 inches. Notice that miscanthus and poplar trees had the lowest ET during the drought year of 2012. Previously, it was expected that perennial crops would require significantly more water, which could have deleterious effects at the watershed scale. This data disputes that theory and shows that planting perennial crops in the landscape with our climate and soils would not have significant adverse impacts.

Water use efficiency (WUE) is the ability of a plant to use water to make the most amount of biomass, simply meaning that some plants are able to produce larger biomass yields than others with the same amount of water. Ideally, we would want a crop that produces large yields with less water (high WUE). This is calculated by dividing the biomass yield by ET. Figure 2 shows the WUE for each cropping system, based on the growing-season ET and the maximum aboveground biomass that was attained by each crop. Miscanthus has the highest water use efficiency in all years, including the drought year. Corn had the second highest WUE, followed by switchgrass, mixed grasses and prairie. 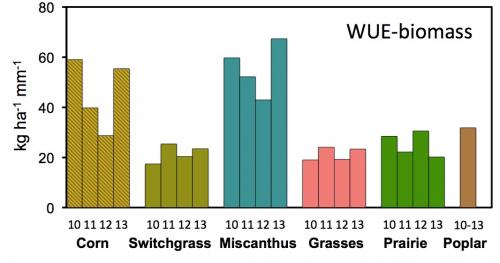 Figure 2. Water use efficiency of six biomass crop species at the Kellogg Biological Station near Hickory Corners, Michigan, over 2010-2013.

This study shows that the six primary biomass cropping systems being evaluated by GLBRC have very similar ET rates. In rain-fed systems where the water table is below the root zone, as is the case at this study site, perennial crops use about the same amount of water as corn. It was previously hypothesized that planting large acreages of perennial crops on marginal lands could have negative effects on watershed dynamics. One of the strengths of this study was the continuous monitoring of the water cycling that allowed for accurate accounting of water inputs and outputs. Additional research would be needed for high water table soils (where groundwater exists in the root zone) and irrigated lands.