Weather ideal for start of downy mildew in grapes

Rainy weather and humid conditions favor downy mildew development in grapes. Here is a review of the pathogen’s biology and control measures.

Downy mildew, caused by the oomycete Plasmopara viticola, has gotten off to a good start in 2015 due to copious rainfall, moderately warm temperatures and high relative humidity over the past weeks. Downy mildew was first seen in the Lansing, Michigan, area on wild grapes June 10, and in flower clusters of unsprayed ‘Chancellor’ vines in East Lansing, Michigan, last week. This is pretty typical timing for this pathogen in rainy years. No infected suckers were noticed at the base of the vines, but this is something to scout for; vines would be stunted and covered with a white layer of sporangia. Depending on the weather in the next couple of weeks, downy mildew could gain a solid foothold in Michigan grapes. However, long, warm and dry periods will suppress downy mildew development.

The pathogen overwinters as thick-walled spores (oospores) in leaf debris from the previous growing season on the soil surface under vines. Oospores at or near the soil surface will germinate in spring by producing sporangia that are rain-splashed or wind-blown to susceptible grape tissues. Oospore germination is favored by rainfall of at least 0.4 inches and temperatures over 50 degrees Fahrenheit. Despite the fact these conditions can occur in April and May, I have never seen downy mildew develop until June in Michigan. At the earliest, I have spotted downy mildew symptoms in early June, and usually these occur on wild grapes that grow close to the ground.

Sporangia release swimming zoospores in a film of water (rain or dew) which infect the leaves by penetrating the leaf stomata within several hours. Light green or yellow lesions, called “oil spots,” on leaves appear within five to 17 days after infection, depending on the temperature. The incubation period is shortest at temperatures of 20-25 C (68-77 F). When the temperatures are lower or higher, the symptoms will take longer to develop. Sporangia and zoospores are actually easily desiccated. They die within two to three hours of exposure to low humidity and sunlight, so most infection occurs soon after their release. However, they may survive on leaf surfaces for more than 24 hours under cool humid conditions. After warm, humid nights, a white downy fungal growth (sporangia) will appear on the underside of leaves and other infected plant parts. 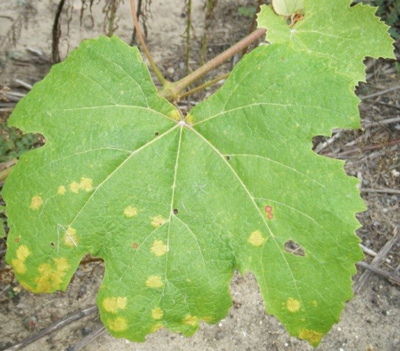 To look for downy mildew, visually scan leaves and clusters, focusing particularly on leaves and suckers close to the ground as entire suckers can become infected by contact with oospores in the soil. If you see yellow lesions, turn the leaf over to look for white sporulation on the lower leaf surface. Occasionally, low-level Gramoxone herbicide injury may resemble downy mildew lesions. To confirm that it is downy mildew, simply remove several symptomatic leaves and place them in a plastic bag with a moist paper towel and store in the dark at room temperature overnight. White sporulation should be visible on the underside of the leaf the next day or definitely within two days. 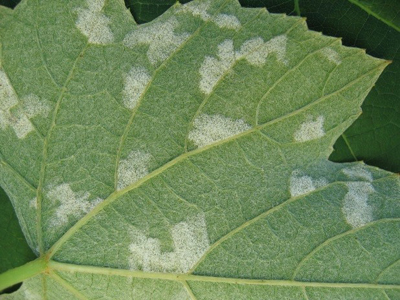 Michigan State University Extension recommends applying fungicide sprays for downy mildew in the next few weeks for susceptible varieties. The following fungicides are excellent options for downy mildew control: Ridomil Gold MZ or Ridomil Gold Cu (consider processor requirements, pre-harvest interval and copper sensitivity of vines before spraying) and phosphorous acids like ProPhyt and Phostrol. Ridomil and phosphorous acids are systemic and have curative and anti-sporulant activity. Ridomil applications often appear to eradicate downy mildew and can keep it at bay for three to four weeks. Phosphorous acids are not quite as strong as Ridomil, but they are substantially less expensive, and if symptoms and sporulation are already present, you can increase their effectiveness by applying a second “booster” application five days after the first application. Strobilurins like Abound, Pristine and Sovran are also very effective, but don’t have much curative activity and are best used as preventative sprays.

For organic growers, Serenade and Sonata are the best options (apply with NuFilm P sticker to extend the longevity of the product).