MSU weed expert explains how the type of weeds present indicate problems at the growing site.

Weeds are the “bane of society” in a gardener’s world. The funny thing is no person or single text book can pinpoint exactly what a weed is. For example, I had a weird fuzzy weed known as common mullen come up in our MSU Extension children’s garden one year and quickly called for its head (and stem and root!). My colleague however did not see it that way for she said it had “great landscape structure” and would end up providing a nice meal for winter birds. Hmmm. So what then, constitutes a weed?

MSU Extension weed specialist Ronald Calhoun has spent the last 20 years or so trying to pinpoint this issue. “If you ask a person what is a weed, they will answer, ‘Well, it’s that green thing. Ya know, it’s in my sidewalk’s cracks and it flips me out.’”

Calhoun says in his years of study, he has found no botanical designation of weed. “A weed is absolutely a human designation.”

So if a person sees a plant that they don’t want in their garden, or perhaps one interfering with another plant, they would describe it as a weed. In my woodsy garden, one of my biggest weed issues is the ever-germinating oak seedlings planted by a well-intentioned, albeit forgetful, squirrel. Calhoun says that the gardener has “supreme control” in his or her backyard to make this decision and that is kind of cool.

Evolution of the weed whisperer

In the weed science community, Calhoun has been given the name “weed whisperer.” As he began a quest to have a photographic diagnostic tool to identify weeds, he observed characteristics of the weeds as well as their preferred growing conditions. At the end of the day, Calhoun noticed that the weeds seemed to actually be telling a story about the condition of your lawn or garden. Plants tend to be opportunistic, benefitting from a growing environment that suits their needs. Knowing this, Calhoun says weeds can tell you what is going on with the site such as compaction, moisture level or pH. If you have a lawn that is droughty or planted in soil that is too acid, particular plants colonize the area by chance. If an opening appears, whamo—crab grass fills in. When the pH is off-kilter, red sorrel pops up and so on. Understanding the conditions that encourage weeds will help gardeners reduce reliance on pesticides for control and lead us to be better gardeners, he says.

During his photographic journey, Calhoun also noticed that some of these “weed plants” actually had admirable traits too. Take for instance, orange hawk weed. “What a show-stopping flower,” he says. “This amazing orange-yellow bloom should be on a poster.” 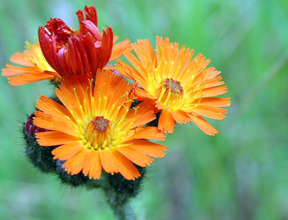 While common yard weed blooms won’t win best of show in the Chelsea Flower Show, lowly ground ivy gets his vote. With an orchid-like shape this violet-colored bloom is unique and dotted with purple and white. Calhoun has also developed a weed identification website to help people. You can go to http://www.msuturfweeds.net to check it out.

If you would like to learn more, Calhoun will be part of a day-long event in Grand Haven, Michigan, on Saturday, March 12. The West Michigan Nursery and Landscape Association sponsors March Garden Day each spring to get gardeners enthused about the coming growing season. With two keynote presentations and a half dozen break out sessions, everyone is sure to come away inspired. Registration information can be found at: www.wmnla.com

You can read Rebecca’s blog at: www.stuckongardening.com