The blueberry bloom period proceeds at a rapid pace thanks to good weather conditions favoring plant growth and development.

Weather conditions in west central Michigan improved substantially during the past five days, allowing plants to develop at a rapid pace after days of low temperatures and rains that slowed down plant growth and development. Current temperatures have moved up from the upper 50s to more seasonal temperatures in the upper 70s. For the past seven days, the minimum temperatures averaged 53 degree Fahrenheit and the daily maximum averaged 78 F. Also, there were only scattered showers that left less than 1 inch of rain. This allowed fields to dry up and facilitated pest and disease control practices without major problems.

Blueberry bloom in most varieties is proceeding nicely and warm temperatures from the past five days are providing good weather conditions for pollination. Petal fall in early-season varieties started last week and will speed up as weather conditions remain around the upper 80s and low 90s. Although for the most part blueberries were not affected by winter temperatures or spring frost problems, there were some localized problems resulting from temperatures below zero occurring in January and February 2018.

Although winter weather conditions in 2018 were mild for the most part, there were some days when the daily minimum temperatures fluctuated between 0 and -10 F. Those temperatures occurred Jan. 4 and 5 and Feb. 12, 2018, with no apparent effect on blueberry fields in the Zeeland-Holland area (see graphic below). 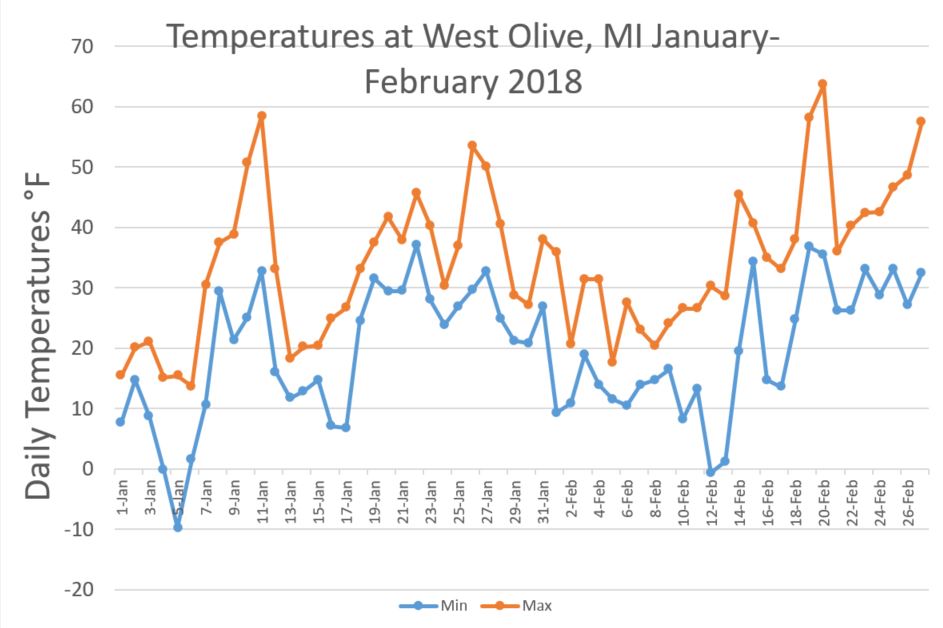 Daily minimum and maximum temperatures around West Olive, Michigan, during January and February 2018 that affected some blueberry fields around the Holland-Zeeland, Michigan, area.

However, just recently growers are observing substantial damage in some fields where eddies of cold air remained stationed for a long time, causing scattered leaf bud damage in some varieties like Bluecrop, Duke and in some instances Elliott. Under a “normal” cold winter, those temperatures would not have an effect on dormant plants. However, those temperatures were preceded by temperatures in the low 30s followed by temperatures above the 50s like on Jan. 10 and 11, and again on Feb. 14 and 15. Those conditions shocked the plant because leaf buds were ready to finish the winter rest period and lost their winter hardiness due to temperatures above the 42 F (see pictures below).

Affected areas look brown from afar with plants having shoots without bud leaves, and surrounded by areas with healthy plants with full foliage in development. Check fields, quantify the potential damage and take the appropriate measures to prevent secondary infections by fungal diseases.

Regarding insect problems, cherry fruitworm overwintering adults are out in southwest Michigan. Current forecasted population dynamics according to the MSU Enviroweather cherry and cranberry fruitworm phenology models are as follows. Remember, the day when the first moths are caught on your pheromone traps is the starting day for your growing degree-day (GDD) accumulation to predict when to place the first application against cherry fruitworm (approximately 200 GDD).

According to the current predictions, the fruitworm egglaying period has started in southwest Michigan. In west central Michigan, it will start during the following three to four days. Start your fruitworm spray program considering the presence of pollinator insects, and select the insecticide accordingly. An important clarification is that spray applications against cherry and cranberry fruitworm should be approximately 100 GDD after the first adults are found in the pheromone trap; the “biofix” (see table above).

Confirm can be used in Michigan counties where Intrepid is restricted by Endangered Species Act regulations stating that Intrepid cannot be used "within one mile of sandy habitat that supports wild lupine plants.” This affects only Allegan, Monroe, Montcalm, Muskegon, Newaygo and Oceana counties. Also, to protect bees for blueberry pollination, do not apply any broad-spectrum insecticides during bloom. Whenever possible, make applications during bloom in the late evening when bees are not actively visiting flowers. For insecticides and dose, please check the “2018 Fruit Management Guide,” MSU Extension bulletin E-154.