Warm, sunny weather and intermittent showers over the past several days has caused tree fruit development to continue to move along rapidly throughout the region.

Vegetative growth on most crops is lush and vigorous due to ample moisture; many growers have had little cause to use their irrigation systems this season. However, the frequent precipitation has also lead to some major concerns with several tree fruit diseases, including powdery mildew, brown rot and cherry leaf spot.

Tart cherry harvest is underway in west central Michigan. The crop is light, but generally of good quality. Spotted wing Drosophila (SWD) larvae were detected in tart cherry fruits for the first time in a west central orchard on July 7. While this was an isolated incident in the region, this demonstrates the need for careful management practices at this time.

Adult SWD trap catches have increased rapidly over the past week, signaling a time of particularly high risk until harvest is complete. Single sites in west central Michigan were catching as many as 200 flies across five traps.

Frequent rainfall has contributed to an increase in cherry leaf spot in recent days. Early damage from cherry leaf spot this season caused many growers to spray heavily, resulting in a period of adequate management of the disease. However, actively sporulating lesions can now be found again in many orchards that had issues with this disease several weeks ago.

Some blocks of young trees are looking particularly poor; many orchards are already visibly losing leaves. Defoliation from this disease can slow the ripening of the crop and damage winter-hardiness of tart cherries. 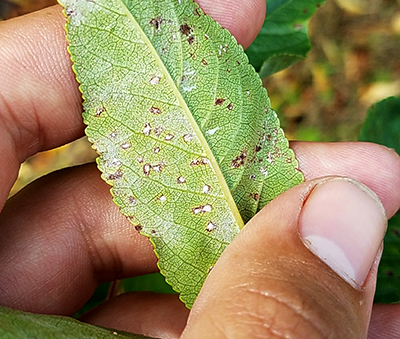 Active sporulation on the underside of tart cherry leaves.

Powdery mildew has also developed extensively on the new foliage of many orchards in the region following the recent period of warm, humid weather.

Sweet cherry harvest is ongoing for most varieties. Harvest of Maraschino-type sweet cherries has ended. Many growers suffered significant losses in the last two weeks due to fruit cracking brought on by heavy rains.

Brown rot is noticeable in most blocks, particularly at tops of trees. The crop was already light due to the frost, so this has been a particularly tough year for the sweet cherry folks in the region.

SWD larvae were detected for the first time in sweet cherries July 7. Growers who are selling fresh sweet cherries are struggling to keep adequate spray coverage while picking for market sales.

Apples continue to look good thanks to frequent rainfall. The crop is light in some spots due to spring frost, but currently appears to be high in quality.

Apple scab and fire blight have generally been very low in the region this season, which has been welcome news for growers struggling to manage tart cherries in these challenging conditions.

Aphids have been increasing in the past several days, but codling moth and oriental fruit moth catches in apple blocks have continued to be low. Apple maggot is flying.

Peaches are also sizing rapidly. Flight of the second generation of oriental fruit moth has begun; heavy edge damage and high trap catches are being reported at most area peach sites. The peach crop is highly variable by site due to the frost events back in May.

Bacterial spot has begun to show up on fruits and leaves. Peach leaf curl has also been visible in many blocks, leading growers to consider fall applications in addition to a spring application. Many growers suspect the recommended timing for spring management may have been missed, and are reevaluating their spray records to make sure spring peach leaf curl sprays are being applied before 100 GDD base 42 after Jan. 1.