Asiatic garden beetles have had a big summer in mid-Michigan. Adult beetles are mostly a nuisance, but may chew the outer edges of leaves of many yard and garden plants.

If you live in Michigan anywhere south of Lansing, you have probably noticed lots of little (0.375 inch), cinnamon-brown beetles on your porch, in the garage or on the ground around any bright outdoor lights. The Asiatic garden beetle has spread from Indiana and Ohio into the southern half of Michigan over the last 10 years. It comes from Japan and was originally found in New England in the 1920s.

Although Asiatic garden beetles have been active in southwest Michigan for at least 10 years, they have taken a major leap in abundance in Ann Arbor and Lansing this year (2016). I am seeing at least 10-fold more beetles this year compared with last year, and Gary Parsons, our entomology collection manager at Michigan State University, found that his light traps used to collect insects at night have been flooded with Asiatic garden beetles, accounting for about half of all the insects in the trap each night for the last two weeks. 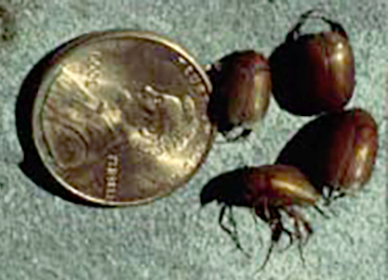 For urban areas, this beetle is mostly a nuisance, entering homes at night through poorly-sealed windows and doors because they’re attracted to light. However, when abundant, they may chew the leaves of geranium, asters, dahlia, mums, roses and a variety of other flowers, shrubs and trees. The beetles feed mostly during the night and tend to chew the edges of the leaves first, leaving a ragged appearance to infested plants. The larvae are sometimes found feeding on turf roots, but they seem to prefer the roots of perennials. In some cases, they can be a pest of field crops or vegetable crops, especially potatoes.

The only good news I have for you is that we have probably already seen the peak of adult activity this summer. MSU Extension expects the beetles to slowly disappear over the next two to three weeks, at least until next summer when they will no doubt be back in even bigger numbers.