What lies beneath: Ice?

Ice sheets have formed on many golf courses this winter and have the potential to kill turfgrass.

Some might remember “What Lies Beneath” as the title of a horror movie but currently, ice is a real-life potential horror for golf course superintendents worried about winterkill.

The winter of 2013-2014 will be remembered for many years to come. The first significant event was the ice storm of Dec. 21-22, 2013, that knocked out power for thousands and coated everything, including trees and exposed turf, with a perfect coating of ice.

Most turf areas were covered with snow prior to the icing event and as the rain percolated through the snow, it formed a very porous, crusty, ice-snow layer. This type of ice-snow layer is not a concern for turfgrass as it is porous and allows for gas exchange from the turf/soil interface to the atmosphere.

Five days after the ice storm on Dec. 27, temperatures at the Michigan State University Hancock Turfgrass Research Center (HTRC) warmed to 38 degrees Fahrenheit and were accompanied by 0.15 inches of rain. On Dec. 28-29, temperatures were above 40 F. The warm temperatures resulted in melting and I believe this is when the first ice layer formed. 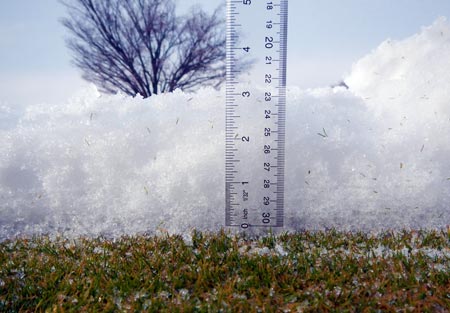 Some superintendents that were clearing snow from putting greens throughout the winter may have been successful at removing any ice that existed or formed during these melts. However, depending on available labor and equipment, many superintendents are not able to constantly remove snow during the winter, so ice formation is inevitable.

Since the melting ended on Jan. 13-14, temperatures have been well below the point where any further melting would occur. Not every green at the HTRC is covered in ice, but at least one poorly draining Poa annua putting green is now covered in a 1- to 2-inch ice sheet. I believe this ice sheet initially formed during the Dec. 28-29 melt, so as of today, Jan. 29, the Poa has been under ice for 31 days. 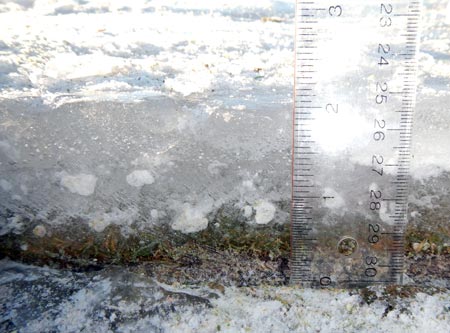 In Michigan, crown hydration and subsequent refreezing are often the primary culprits of winterkill, especially for Poa annua greens. However, this year ice sheets are a cause for concern. In the 1960s, James B. Beard conducted research at MSU on survival of creeping bentgrass and Poa annua under ice sheets. Creeping bentgrass survived 120 days of ice cover without significant injury while annual bluegrass was killed somewhere between 75 and 90 days of ice cover.

More recently, Darrell Tompkins conducted research at the Prairie Turfgrass Research Center in Canada that suggested Poa annua greens could be damaged in as few as 45 days under ice. The primary cause of death to turfgrass under ice sheets is most likely from toxic gas accumulation under the ice sheet from soil and turfgrass respiration. The day estimates for turf survival are just that, estimates; use them as a guide, but know that they are not absolutes.

Whether or not to attempt ice removal is a difficult decision for golf course superintendents. The decision to remove ice can be based on several factors, including turf sampling, duration of ice cover, current and future temperatures, ability to remove water following melting from the green, and labor.

Bob Vavrek from the United States Golf Association (USGA) recently posted a great YouTube video on how to sample greens under ice to assess survival. An important point that Vavrek makes is that there is variability in sampling and just because your sample comes out alive doesn’t mean all areas on the green will survive; same can be said if your sample is dead.

As discussed in the previous section, estimates of days of ice cover causing death vary from 45-90 days for Poa annua and 120 days for creeping bentgrass. At this point I’m less concerned for creeping bentgrass surfaces as I’d expect significant melting before we reach a 120-day threshold as this would be well into April. Poa annua is less certain as at the HTRC we will approach 45 days under ice cover by mid-February. Check your calendar and start counting. 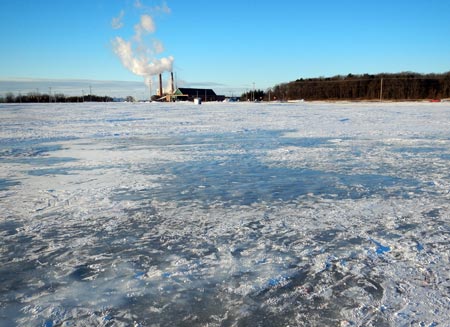 Our 10-day forecast does not look good for trying to remove ice as daytime high temperatures are forecast in the teens with nighttime lows in the single digits. Part of the concern with removing ice is exposing the turf to cold air temperatures after being insulated with snow and ice since mid-December. In the past, some superintendents have removed ice and then recovered the greens with snow to provide insulation against cold temperatures.

Physical ice removal includes practices to fracture the ice with impact using hammers, chisels, aerifiers, slicers, etc., and then remove the fractured ice sheet with shovels, tractors or skid steers. Michigan State University Extension experts recommend avoiding direct impact with tools such as hammers to less impact concentrated equipment such as slicers and aerifiers. There’s always some risk associated with impact-related ice removal, but the alternative of leaving ice in place and rolling the dice on survival is also risky. 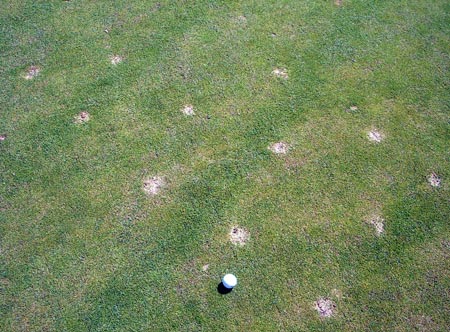 There are many different products that have been used to melt ice including black sand, dark-colored natural organic fertilizers, sunflower seeds and fertilizers. The key to any melting strategy is to be able to remove the water from the green following melting so it doesn’t refreeze and form another ice sheet. We will be testing products to melt ice at the HTRC in cooperation with researchers from the University of Minnesota in the coming weeks.

If you’re going to remove ice, you need help. Ice removal is not a one-person job. If your golf course has 18 greens covered in ice, this is not going to be finished in one day, even with several employees helping.

Unfortunately, there are no guarantees with respect to winterkill and whether or not ice is removed. The days under ice cover for survival are estimates from research and conditions from course to course and even within the same course vary, thereby effecting how long turf can survive under ice. It’s already been a long, hard winter and let’s all hope our turf survives so it’s not a long, hard spring reestablishing grass.

The heat is on: Protect golf course turf during high temperatures