What’s going on with fall color in Michigan?

Many Michigan residents have likely noticed some earlier-than-usual fall color in their neighborhoods. Maples, honeylocusts, sassafras and other tree species have shown early fall color around the Lansing, Michigan, area this year (Photo 1). Why the early color change?

A couple factors are at work. We had some rounds of cool, some might say cold, nights in late August and earlier in September (Fig. 1). Clear days and cool nights combined with shorter days are the conditions that normally produce our most striking fall color. Some fall color predictions sites were forecasting peak color to occur at least a week earlier than normal in the upper Midwest. The wildcard each year is rainfall and associated soil moisture. Moisture stress can cause leaves to begin changing color early and, if the stress is severe enough, can cause leaves to drop prematurely, as can foliar diseases, which is an issue in some locations this year. 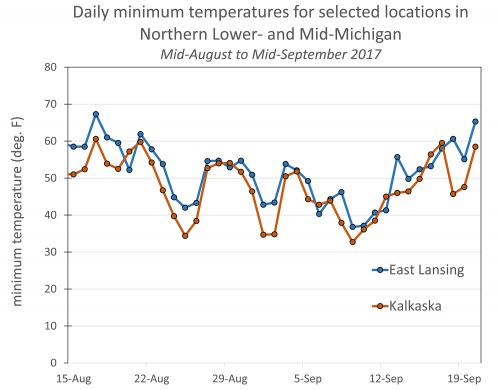 Figure 1. Cool nights in August and early September set fall color into motion for some trees in northern and Mid-Michigan. Source: MSU Enviroweather.

The extent to which drought stress impacts fall color in 2017 will likely depend on the part of the state you’re in. In Mid-Michigan, leaf change has been affected by dry conditions. East Lansing, Michigan, has received 1.14 inches of rain since Aug. 16, while Kalkaska, Michigan, has had nearly 3 inches of rain during the same period.

The most recent Midwest Drought Monitor shows that the southern half of the Lower Peninsula has been abnormally dry and some portions are in moderate drought (Graph 2). These dry conditions, combined with temperatures in the upper 80s and even 90s, have already begun to result in some early leaf shed, particularly for trees in stressful landscapes such as parking lots and street medians (Photo 2). 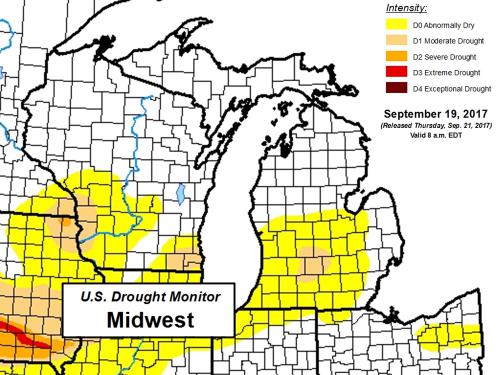 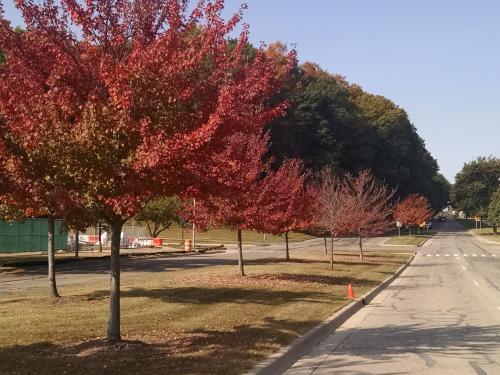 So what lies ahead? The short-term forecast for Lower Michigan calls for continued hot days and warm nights. For trees that have not already begun to turn, this should push the clock back a bit. We should return to more seasonal conditions toward the end of the month and beginning of October, with lows in the 40s and even 30s in some parts of the state. This should get us back on track for a good, slightly early, fall color season.